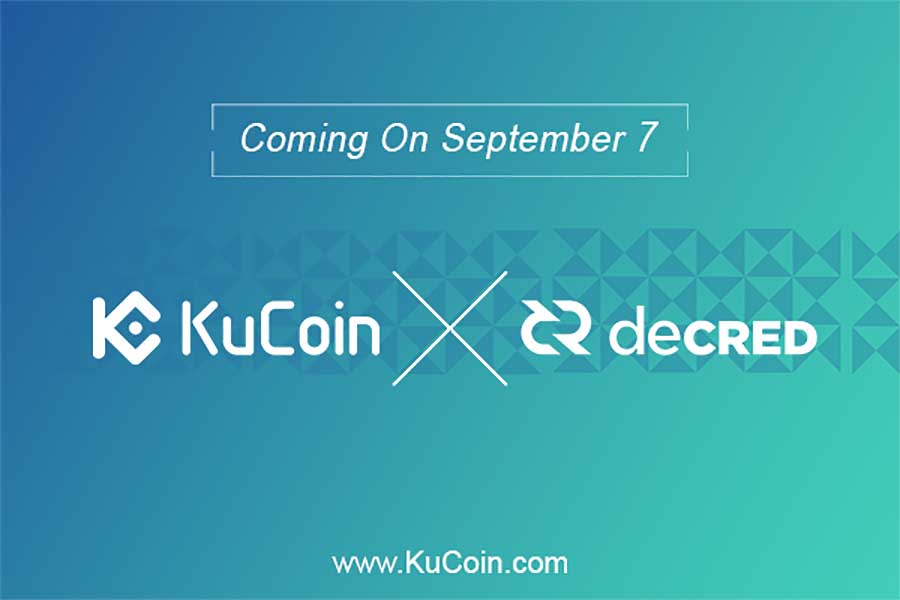 Decred aims to solve the inefficiency in the way Bitcoin operates. It is recognized as a cryptocurrency that prioritizes decentralized governance and decision making on the blockchain. Today, they have notably announced the listing of their system transaction currency called DCR at KuCoin blockchain asset exchange.

DCR is now available for deposit with trading pairs DCR/BTC and DCR/ETH. Buying begins at 21:30 (UTC+8) while Selling/Withdrawal at 22:00 (UTC+8)

Decred (DCR) strives to be the next best cryptocurrency to come after Bitcoin. It works to set itself apart from the support by stating that the project’s community is the one completely in charge. While this anticipates well with decentralization, it continues to be seen if that will be the case proceeding forward.

The most impressive feature of Decred is its hybrid consensus algorithm. The platform is intended to support both proofs of work and proof of stake systems. That suggests you can either be a miner or engage through voting. The only problem seems to stem from the fact that the team continues ASIC mining that locks out a majority of would-be miners.

Decred was built and designed with the core mission of solving the problem of blockchain governance.

With Bitcoin as a sample, defining the future of the currency is remarkably challenging. What’s good for miners may not be suitable for developers or users, and vice versa. As there isn’t an effective means of governance, issues like the block size debate can get controversial and even lead to hard forks when a consensus isn’t reached with the community. Now, rather than a united community all operating to make Bitcoin the best it can be, we have Bitcoin, Bitcoin Cash, Bitcoin Gold, Bitcoin Diamond, and so on.

Jake Yocom-Piatt organized the project. He is a cryptocurrency pioneer and specialist in open-source software, as well as the author of project updates on the Decred blog. Conceivably the most critical contribution Yocom-Piatt makes now is everything that he does to make the Decred team and community together through open and straightforward communication.

There are also numerous developers who work on Decred, most important of which is the lead developer, Dave Collins, who worked with Yocom-Piatt as a Bitcoin developer before the founding of Decred.