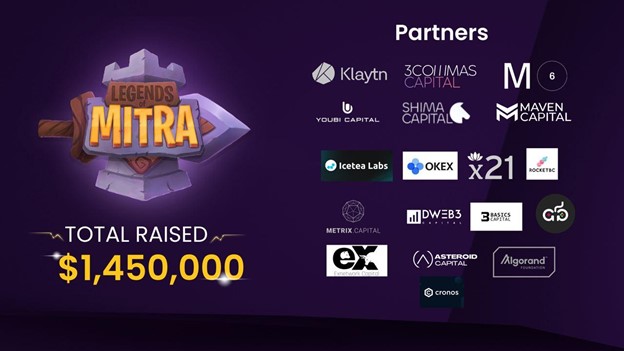 December 15, 2021 —  Legends of Mitra (LoM), a play-to-earn NFT game, has closed a USD1.45 million private financing round with the support of an impressive lineup of GameFi and blockchain investors. The closing of the fundraising round is a significant milestone as LoM prepares for the public offering of its MITA token, an event recently placed on GameFi’s upcoming IGOs (Initial Game Offerings) to watch list.

These investors are well-positioned to guide LoM’s growth in the GameFi and NFT sector, including by building marketing and partnerships through strong global networks, expanding its multi-chain strategy, and supporting the token offering.

The funding will be used for platform marketing and expanding partnerships across P2E gaming, interoperable blockchains, and NFT marketplaces.

Play-to-earn games are taking over the blockchain gaming world where the gaming earnings paradigm is shifting in favor of the players who can play for free, own their in-game assets through NFTs, and even earn passive income by staking their tokens and NFTs. Yet in reality, the open economy of P2E gaming is becoming increasingly siloed as more new gaming platforms are launched.

Legends of Mitra is truly changing the gaming paradigm by developing a blockchain gaming platform as it is intended to be: a multi-chain gaming metaverse in which gamers can trade assets across games and blockchains. To this end, LOM is being built across multiple blockchains, including Klaytn, Cronos, Algorand, Wax, and the Binance Chain to create a fully multi-chain strategy game.

Through its gaming model called “Human Mining, in the free-to-play-to-earn LoM game, players are incentivized for their time, contributions, and efforts by being rewarded with MITA tokens and NFTs, depending on their engagement and skills in the game. Players can earn through game play by fighting and winning PVE battles, joining Clans and winning Clan Wars, and being top 10 on daily leaderboards; in the NFT marketplace by collecting and selling heroes and resources; and through DeFi by staking MITA tokens for rewards.

“We are positioned to be one of the first free-to-play-to-earn NFT and metaverse games coming out of Africa,” says Kwasi Kena, CEO of Gem Studios the Studio building the Legends of Mitra game.

The LoM Token Offering on RedKite

Following on the successful private fundraising round, the date of the public sale of the Legends of Mitra utility token MITA through a token sale on the RedKite launchpad will soon be announced. Follow the LoM official Telegram account for more details.

About Legends of Mitra

Legends of Mitra (LoM) is a Free-to-Play-to-Earn game that rewards players with tokens and NFTs depending on their engagement and skills in the game. The key difference between LoM and a traditional mobile game is the integration of Blockchain technology and the economic incentives designed into the game that reward players for their time, contributions, and efforts in the game.