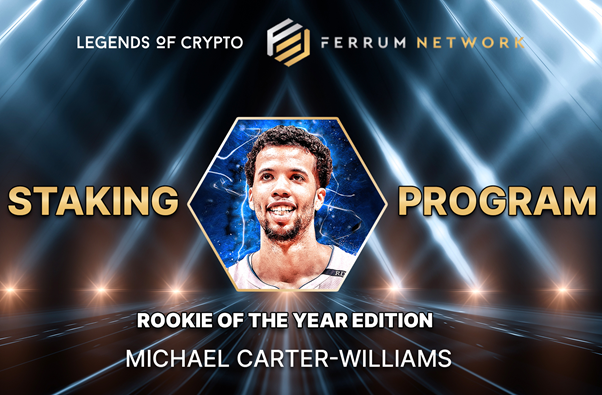 by Bitcoinist
in Press releases
67

LegendsOfCrypto (LOCGame), an NFT gaming and collectibles platform, together with Ferrum Network, recently announced the launch of their joint staking program. The staking program will fall within LOCGame’s Superstar Edition,  a celebration of the project’s new partnership with Orlando Magic’s NBA icon, Michael Carter-Williams.

Ferrum Network focuses on building white label blockchain solutions that power crypto projects, helping them get their product to market faster. Their partnership with LOCGame to launch this new staking program initiative will help the project serve as a stepping stone to get the Superstar Edition with Michael to the crypto masses and NFT gaming enthusiasts.

LOCGame has put amazing earning opportunities in place via the program for $LOCG token holders. These holders can expect diversified incentives from this program as a chance to earn LOCG, mystery NFT boxes, as well the special edition starter, starter prestige, and starter elite packs.

The LOCGame project has proven to never shy away from standing with the needs of their community. The staking program adds an extra incentive to their loyal followers, as they can now use it as an avenue to broaden their portfolios. Users get to maximize their unique NFTs by taking them to the next level, presented by the Superstar Edition that goes beyond just collectibles.

LOCGame has established its position in the NFT gaming arena by their focus on elevating the power of DeFi to turn the entire project into a profitable vehicle for their investors and users.

The first step for users to join the staking program is to hold their $LOCG tokens within their MetaMask wallet. The project is leaning towards a single staking pool this time around, with the benefits emanating from both maturity of the held tokens and total value locked.

Next, users need to choose the quantity of $LOCG they desire to stake, followed by depositing the selected amount of tokens directly into the staking pool.
Staking Program smart contract link:

Users are encouraged to take part in this staking program and see their portfolios grow while enjoying one-on-one conversations with the basketball legend.