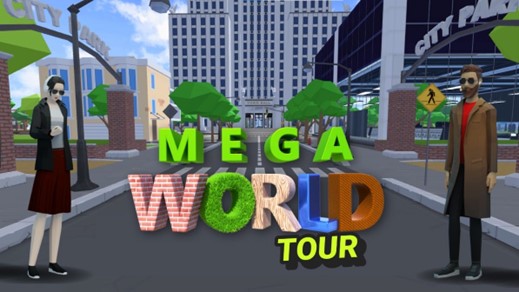 Mega World is a metaverse with real economics built on top of the popular Web3 city builder game MCP3D running on Ehereum blockchain since 2018, where every game asset is NFT owned by a player and every action is a verified transaction on a blockchain.

Players acquire land plots and construct buildings to produce Resources that are required by other buildings to operate that facilitate trading between players.

As the much anticipated Mega World Tour will be released August 24 at 5 PM UTC, thousands of players will be able to explore the decentralized city constructed by 25’000 landowners in 4 years. Walk down the streets with PFP NFT Avatar, meet other Citizens, chat and look for a spare land plot to build a shelter in the “megaverse”. Complete tutorial task to receive an Alpha Ticket granting access to the Mega World Alpha release coming later this year.

To keep up with the pace and the project’s growth ambitions, the MegaCryptoPolis $MEGA Token which has been running as just supplementary element since 2020, is redesigned and given the major role in the Mega World economy to become a centerpiece of the emerging megaverse. Along with all the properties of the current one — every action in the game will require $MEGA starting from August 31.

Every $MEGA holder will be able to swap the old token with an exchange rate of 1 to 10 — so, for every 1 MegaCryptoPolis $MEGA a player will be able get 10 new Mega World $MEGA on August 30.

Set your reminders and enroll for the Mega World Tour: http://megaworld.io

The story of the megaverse transformation published in the official project blog:

SUPERNOVAE (SPNV) was in the first flight of NFT mass adoption, providing broad audiences with the practical implementation of distributed ledger technology by breaking the entry barrier through entertainment and education. Formed in mid-2017, the team was born out of a raw passion for video games only to become one of the leading decentralized applications developers.

MegaWorld (formerly MegaCryptoPolis) and Farsite are nxt-gen Web3 games providing players with genuine ownership rights for their assets in the form of NFT, which can be freely transferred between players and traded on the open market.