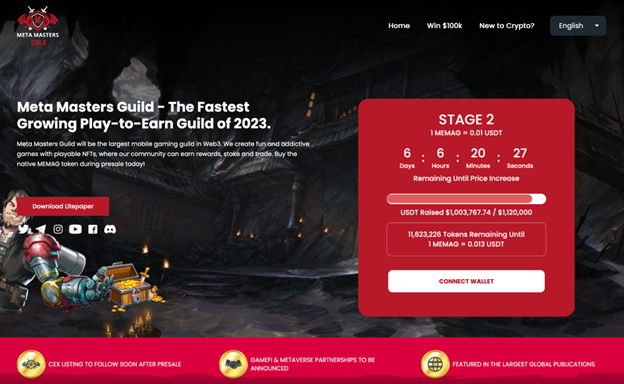 The MEMAG presale recently crossed the $1 million milestone, raising an additional $300,000 in just two days over the weekend. The presale is currently in Stage 2, but it is quickly approaching Stage 3, in which the price for the token will rise from $0.01 to $0.013.

It seems that gamers across the Web3 sector are highly excited about the entire Meta Masters Guild project and believe the ecosystem has the potential to flip the entire play-to-earn economy on its head. The intention behind the ecosystem is to bring play-to-earn closer to its original purpose, which is more aligned with playing and earning rather than playing with the sole goal of making profits.

The growth of the Meta Masters Guild presale puts the project on track to becoming the fastest-growing play-to-earn guild of 2023. In addition, with the recent cryptocurrency market revival, it seems that the overall play-to-earn ecosystem is starting to see impressive growth. Heavyweights such as AXS, STEPN, and SAND have seen impressive price hikes this month, causing investors in MEMAG to become even more excited. Here’s why gamers are starting to flock to the Meta Masters Guild presale. 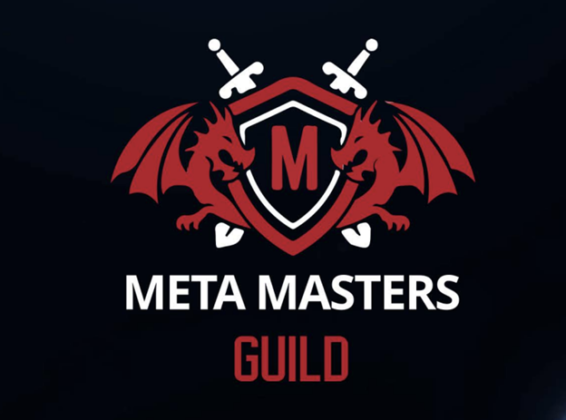 Meta Masters Guild is on a mission to become the largest mobile gaming guild in the Web3 sector. The project creates fun and addictive games stacked with playable NFTs that allow players to earn rewards through gameplay, staking, and trading.

The great thing about the ecosystem is that all the games are created in-house with partnerships through gaming studios, and the native token behind the project, MEMAG, is the transactional and rewards token in each game.

A typical gaming guild is a group of players, or a team, that come together to improve their skills and compete against other teams.

Esports teams are great examples of gaming guilds that form a community of players around a similar game and practice. Some guilds also offer financial support to ensure that players can keep playing without worrying about covering their bills.

One important aspect of the Meta Masters Guild is that they don’t want just to be another gaming guild; instead, they want to be the future of Web3. They will achieve this by building high-quality, blockchain-based mobile games to form a decentralized gaming ecosystem, which allows members to earn sustainable rewards in exchange for playing the game and contributing to the ecosystem.

The games behind the Meta Masters Guild are built to incentivize players to invest their time and money into them by ensuring they are fairly compensated.

One of the main methods of achieving this is by living through principles that put the community and fun back at the forefront of the ecosystem.

We pledge not to let our #blockchain integration, tokenisation, and earning mechanisms get in the way of what really matters, which is an interactive and fun gameplay experience for the player!

As creating fun games is the number one goal of the mobile-based gaming guild, the team has pledged not to let tokenization and earning get in the way of creating an engaging, interactive, and fun gameplay experience. The team understands that to keep the reward economics sustainable, they need to maintain a stable player base, which requires genuinely fun games that keep players returning.

Furthermore, Meta Masters Guild knows that multiplayer games are nothing without a community. For that reason, the project will allow players to have a voice that will shape the future development of the ecosystem overall. The voting process through the MEMAG governance token will ensure that all players can get involved in the decision-making process and have their say on improvements.

✅ All in-game assets are owned, verifiable, and tradable on the Ethereum blockchain.

Learn more about #MMG and our commitment to ownership and transparency on our website ⬇️https://t.co/CciShaUh6l#metamastersguild #crypto #presale pic.twitter.com/No4ga4uuIV

In addition to putting the fun back into games and keeping the community at the heart of the ecosystem, Meta Masters Guild has another important principle it lives by; gamers in the Meta Masters Guild own their assets. Whatever players earn in-game NFTs through gameplay is wholly owned by the player. They have complete autonomy on what they choose to do with their assets, creating a completely decentralized gaming ecosystem.

P2E Gaming Back on the Rise

The ongoing MEMAG presale is likely finding some additional support due to the fact that P2E games are finally back on the rise again. Finally, after months of endless price plummets, the cryptocurrency market seems to be finding a bottom, helping established P2E Web3 games experience some positive price games.

For example, Axie Infinity, one of the largest P2E games in Web3, recently experienced a substantial 40% surge over the past week, bringing the price for the token above $13 and its market cap back to $1.5 billion. 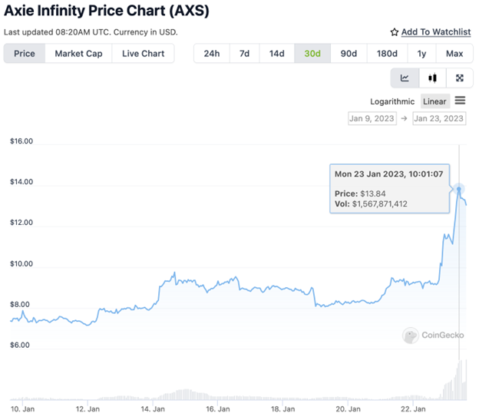 It’s not just Axie Infinity that is experiencing substantial price gains. Other Web3 projects in the play-to-earn sector are also seeing significant growth. For example, The Sandbox, an epic metaverse with Minecraft-like gameplay, is up 75% over the past month; 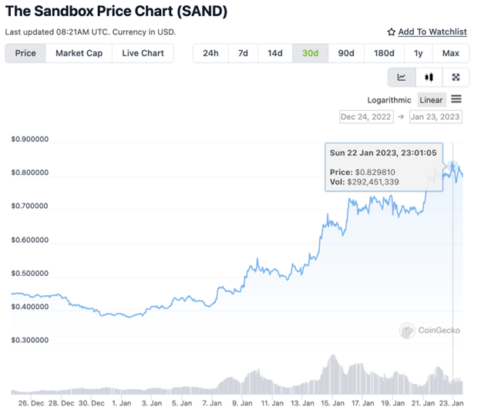 Another great example of a P2E Web3 ecosystem surging is STEPN. The move-to-earn fitness lifestyle application witnessed a n impressive 120% price surge over the past fortnight; 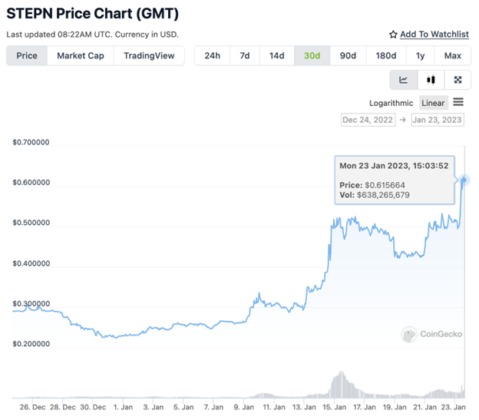 With Web3 play-to-earn projects returning, Meta Masters Guild is gaining considerable traction at the perfect time. Investors across the board are always looking for moonshot tokens with great teams and concepts that are still yet to surge to the heights of heavyweights like Axie Infinity – and MEMAG is a prime candidate. 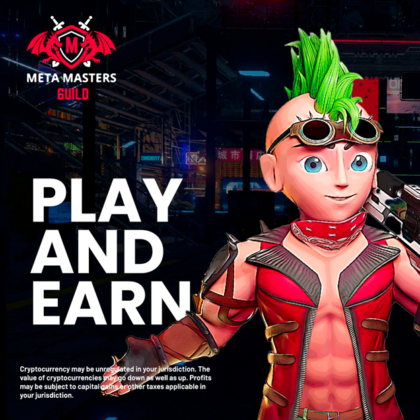 The team behind Meta Masters Guild believes that the current play-to-earn model in the Web3 sector is fundamentally flawed.

They don’t want people in the MEMAG ecosystem to be playing games solely to make money. They believe that if the entire player base is playing the games to make profits – not for fun – it’s impossible for the earning mechanics to be sustainable. As a result, Meta Masters Guild is reluctant to use the play-to-earn tag and prefers the concept of play-and-earn.

Play-and-earn is relatively straightforward to understand and is more aligned with the original concept of play-to-earn.

Under the play-and-earn umbrella, Meta Masters Guild wants to create high-quality games that players spend their time and money on and then allow the players to earn their money back through gameplay and be compensated for the value they add to the MEMAG ecosystem. The games will be available for free, but players can pay more to purchase playable NFTs from the Meta Masters Store.

The entire model revolves around value added by players, and rewards are primarily skill-based. The better you are at the game, the more rewards you can earn.

The in-game rewards token in Meta Masters Guild is GEMs. Players can earn GEMs in various titles and have complete autonomy on what to do with them. Some of their options include;

The GEMs can be used to purchase premium, playable in-game NFTs from the Meta Masters Store and connect their wallets to use them in games. In addition, the premium NFTs come with improved stats, helping the player have a higher chance of winning games to earn more rewards.

Through this play-and-earn concept, Meta Masters Guild hopes that players who keep returning to the game can earn their money back and make some profits while simultaneously enjoying playing.

In addition to earning GEMs through gameplay, the Meta Masters Guild ecosystem provides additional methods to earn from the platform.

Another method of earning through the ecosystem is being rewarded for being an elite-level player. The team will provide in-game assets and NFTs of the highest standard to the highest-performing players in the game. They are dedicated to keeping their best players on the platform because they want to foster and execute a competitive esports scene for their titles and need their best players to stick around to compete. 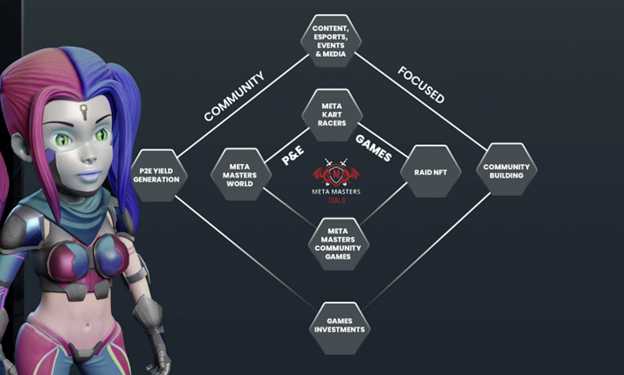 The final method of earning in the ecosystem is through community giveaways and events. Active contributors to the ecosystem will constantly have a chance to win MEMAG tokens through giveaways hosted by the team. They will also have the opportunity to win in-game NFTs and other rewards.

The great thing about Meta Masters Guild is that they already have three AAA games in development, even before its presale has concluded. The games under development are in varying stages and designed to create a fun and interactive gaming experience for guild members.

The first game in the line-up is Meta Kart Racers, a player-vs-player racing game built for mobile devices. In the game, players compete with one another in the Meta Kart Championship while avoiding the evil Meta overlords. Players can earn tokens by collecting gems for their performance on the racetrack, and the earning mechanics revolve around a skill-based competition.

The second game in the catalog is Raid NFT, a turn-based fantasy fighting game. Here, players must choose between several warrior classes and battle in hostile environments, either in a single-player campaign or multiplayer modes. Players can find unique items in the battle arena while putting their skills to the test against opponents. The more upgrades a player earns, the more powerful they become on the battlefield.

The final game in the first series of games is Meta Masters World, an open-world exploration game set in an expansive universe. This game has less structure, allowing players to make their own stories as they play. Players can explore the metaverse, collect resources, enter competitions, and socialize with one another.

The games are created in partnership with Gamearound, a prominent Web3 gaming development studio in the industry. Overall, these first three titles are designed to help Meta Masters Guild build its first gaming community that allows players to play-and-earn while keeping them engaged with the overall ecosystem. 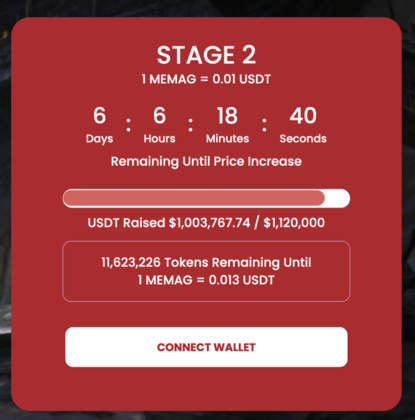 The MEMAG presale recently crossed the $1 million milestone level after raising an additional $300,000 over the weekend. Investors are quickly rushing to the presale as they believe Meta Masters Guild has the potential to completely change the Web3 gaming industry for the better.

The current phase of the presale is stage 2, which is selling the token for $0.01 USDT. Once the presale hits $1.12 million in funding, stage 3 will begin, and the price for the token will increase to $0.013.

The price will continue to increase across all seven presale stages, meaning that the best time to get involved is during the early stages. Once the presale is over, the MEMAG token will be listed on prominent centralized and decentralized exchanges across the industry. The team has already stated that the token will list for a price of $0.023, meaning that early presale stage investors will already come out of the presale with profits to the bank.

Overall, Meta Masters Guild isn’t just another Web3 gaming project. Instead, it seeks to totally revolutionize the entire play-to-earn industry by creating sustainable economics and rewards centered around the community. As a result, the project should have longevity in the sector without being a fad that fades after a few weeks of intensive rewards.