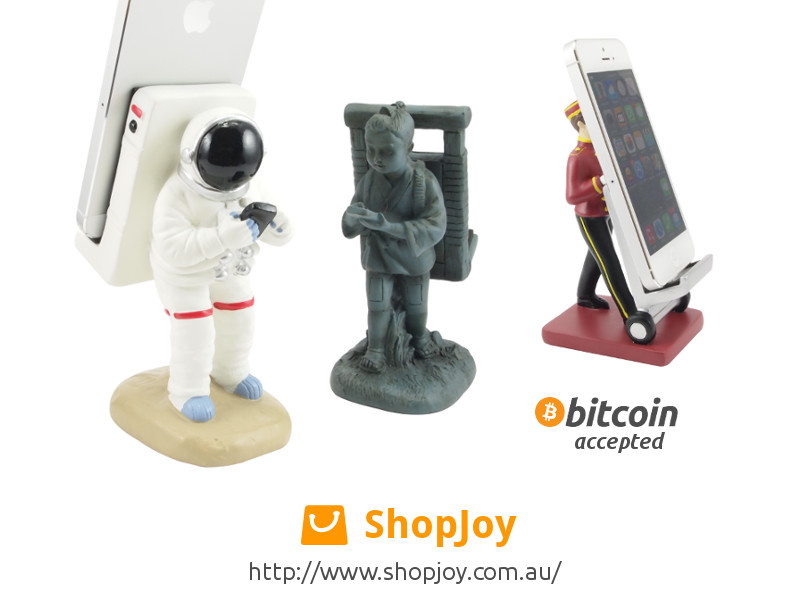 When looking for a place to spend your Bitcoin, we have the bases covered. But if you’re looking for some more quirky items to purchase I think ShopJoy is a hard place to beat. Offering stuff like cases with hands on them, to more sensible items like unlocked phones. Do note that prices are in Austrailian dollars, so take that into factor if you are purchasing abroad.

1. Why did you decide to make ShopJoy a reality?

A number of Australian E-commerce outfits are racing to the bottom. Their entire focus is being cheaper than others – bringing price down and everything else with it including buying experience and customer service.

For example eBay Australia used to be great, but now it’s dominated by cheap goods that are of poor quality and take 1 month to ship.

Independent online stores aren’t immune from poor purchase experience either. It’s not uncommon to find a store that forces you to create an account just to buy one little thing. Or one that fills your checkout screen with lots of confusing upsell options, some checked by default so you have to make extra clicks to remove them.

One of the worst examples I’ve seen is a smartphone offered at an impossibly low price, and then a whopping $75 shipping fee is revealed at the end of the checkout process.

I think these practices are disrespectful towards customers. If a store gives such little regard before taking your money, how much will it afterwards?

ShopJoy was created as an antithesis of this trend, where price is not the most important. Customers are.

ShopJoy is an Australian online retailer that values customer happiness. This isn’t some kind of meaningless slogan. Literally the first thing we did when starting the business was define its customer service philosophy. The business remained nameless for weeks, until we settled on ‘ShopJoy’. This name was deliberately chosen to reflect its customer delight focus.

Last month I stumbled upon an excellent article on customer service by Derek Sivers. He put down in words what I’ve always had in mind for ShopJoy.

In terms of product range, ShopJoy sells high quality unique gifts and novelty products, such as quirky iPhone cases. You can also find smartphones and tablets, not just your latest Samsung Galaxy S5 or HTC One, but also hard-to-find overseas models such as the Korean LG G3 or the Japanese LG Isai.

ShopJoy’s 100-day return policy and free shipping are deliberately designed to make for pleasant shopping experience. To augment this experience I told the website development team in no uncertain terms that the on-site checkout process has to be painless and clear. We introduced the “checkout as guest” feature so buyers aren’t forced to create an account just to make a purchase.

It’s not just about what we have on the site, but also what we remove. We don’t have noisy upsell options on the checkout page. We also don’t have these bogus prices that are crossed out to make the real prices look like a bargain.

The Bitcoin payment option was added in April 2014. I had wanted it in 2013, but it took us a while to settle on which payment processor to use. The processor we ended up choosing, Coinbase, looks like a no brainer now, but last year it was a pretty even contest between them and BitPay.

4. Why did you start accepting Bitcoin?

Great innovation brings equality to the masses. For example, the Internet decentralized access to knowledge. Remember the old encyclopaedia? It was expensive and people rarely ever used one. The Internet and Wikipedia make it so easy to learn about stuff.

When I first learned about Bitcoin and cryptocurrency in general I saw a similar level of innovation. I want ShopJoy to be part of this revolution.

iOS developers talk about how cool it was when they made some the first apps on the Apple App Store. It’s awesome for them to be part of the app revolution pioneers. I want ShopJoy to be in a similar vein with Bitcoin.

5. Do you hold or convert to fiat? Do you pay employees and/or services in Bitcoin?

We plan on holding the Bitcoin and not converting to fiat, as well as paying employees in Bitcoin. Some employees receive payment in Bitcoin. Other employees have been offered the Bitcoin option but decline because they’re not familiar with it, which is totally fine.

It would be nice if our overseas suppliers accepted Bitcoin, funds transfer would be a matter of minutes instead of days, and transaction fee would be significantly lower.

6. What are you currently working on?

Currently, we’re working with a number of Australian Bitcoin startups to promote Bitcoin awareness among Australians. We also semi regularly blog and tweet about new and interesting things we find in the Bitcoin world.

7. Will other cryptocurrencies be added in the future?

No such plan yet.

8. Plans for the future?

ShopJoy hasn’t done a particularly good job promoting itself to the Bitcoin community. This is something that I plan to do in the near future.