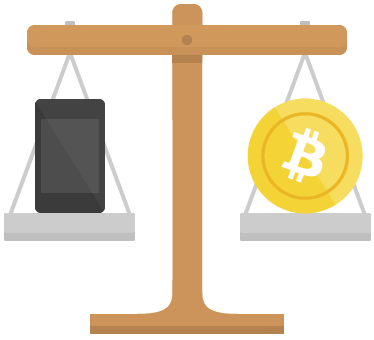 Mintspare has considerably simplified the means of acquiring bitcoins by enabling users to trade in their old, even broken electronics for cold hard crypto.

Mintspare will take your old MacBook, iPod, smartphone, tablet and even your old camera and lenses and turn it into bitcoins. Also, if you have any electronics you think they might take, try it, because they do take special requests.

Mintspare came into fruition to solve a well-known issue: the numerous processes necessary to take in order to acquire Bitcoin: linking your bank account, giving up information you want to protect, etc. Most people have smartphones nowadays and when they get a new one, the old one just goes in a drawer. So, the question is: why not get some money for it?

Mintspare’s rates are some of the most competitive in the industry because instead of using financial services with high fees, they use bitcoin. Even if you don’t want bitcoin you can easily convert it to cash to get the most money for your old toys, but why wouldn’t you want to keep that bitcoin.

It is hard for Bitcoin to help the unbanked when most methods of acquisition require a bank account; however, the majority of the world has cell phones or will have one soon and now they can get bitcoin for them. This is why Mintspare hopes to open up its’ service to international customers in the near future.

Over the past couple of months numerous businesses have entered the Bitcoin space searching for opportunity.

When I asked Galfry Puechavy, the CEO of Mintspare, what it is like to be running a company at a young age he replied:

“I’m very grateful and humbled by where I stand right now in life at my age. I’ve always been an out of the box character, always challenging my surroundings, and never settling. I believe that played a large role in where I am today.”

In the Bitcoin space it isn’t unusual to see young entrepreneurs like Galfry trying to make a difference. But that doesn’t mean it is at all easy. Galfry faced criticism from his friends and even family, but he was determined to see his vision through.

Galfry knew he had an idea, it was relatively hard to acquire bitcoins and as people became more tech savvy, they would have to get rid of their electronics eventually and hopefully for bitcoin.

One of the hardest parts about being in the Bitcoin space is adjusting to the volatility. Galfry said that this is what keeps him on his toes because he has to adjust at a moments notice.

After going public on Havelock Investments only a few months ago, Galfry also has had to meet the pressure from his investors. But as Galfry said “that’s all part of the experience. It just drives me to work smarter and smarter every day.”

For those in the US start getting your very own bitcoins through Mintspare today.