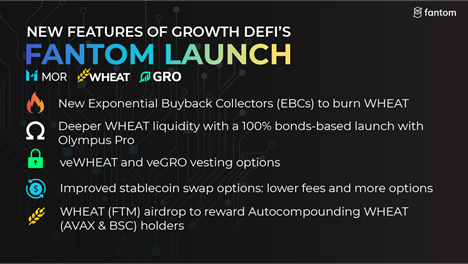 Multi-chain Ecosystem Growth DeFi, Allowing Users to Earn While They Borrow, Will Launch on Fantom

Borrowing crypto-assets and leveraged yield farming became more widely adopted in 2021. The DeFi or decentralized finance ecosystem also continued to grow exponentially throughout last year and is expected to attract even more users in 2022. Many more traders and investors are experimenting with these decentralized protocols because they can streamline transactions between consenting parties without requiring intermediaries (in most cases).

In addition to eliminating third parties, DeFi protocols are also focused on making transactions cheaper and more transparent. According to industry analysts, DeFi should continue to attract more application developers, institutional investors, and even retail clients this year.

There are many high-potential projects and talented teams working in the crypto and blockchain space to improve the existing financial system and ensure a seamless transition to an all-digital Web 3.0 economy.

Growth DeFi is one such project. It’s an innovative multi-chain ecosystem that leverages products like its overcollateralized stablecoin (MOR) and yield aggregator (WHEAT) to offer capital efficiency and is planning to launch on Fantom towards the end of this month.

According to Growth DeFi, this new launch will include MOR for borrowing and lending, and WHEAT for yield optimization and incentivized farming. The Growth DeFi platform itself has been deployed on Avalanche and the Binance Smart Chain (BSC).

They want to offer efficient earning power via their products, along with enhanced revenue flows for their token holders. Last year, Growth DeFi had introduced MOR, an overcollateralized stablecoin for earning yield while allowing users to borrow and leverage yield farming positions (for LPs and single assets).

Earn While You Borrow Model

As explained by the developers, they aim to provide an “earn while you borrow” model. They’re introducing MOR “self-repaying loans” so that users can get paid to borrow funds. The platform

is able to let users borrow money while rewarding them because the MOR protocol utilizes the fee revenue from users to produce yield. This approach effectively lowers user debt over an extended period of time.

The self-repaying loans differ from the existing borrowing mechanisms, but they’re still profitable for users and the underlying protocol. As noted in a blog post, MOR takes a relatively higher performance fee on yield earned when compared to standard vaults, and then converts that over to USDC.e.

This USDC.e gets channeled into a secondary PSM, which works in the same manner as the primary PSM. However, the former has a really high minting price. But the only one issuing MOR in the secondary PSM at these particular rates is the protocol converting the extra USDC.e from performance fees.

This injected USDC.e earns yield by lending via Banker Joe. This approach allows the yield earned to grow faster than the negative interest the user may be receiving, which means that both parties are making sizable returns.

The secondary PSM then offers a constant reserve flow that may be used to refill the primary PSM while facilitating swaps from MOR > USDC. Arbitrage bots are able to trade the price difference when MOR de-pegs (usually when the main PSM is empty of USDC.e), moving USDC.e assets from the secondary to the primary, which facilitates the users’ ability to redeem their MOR for USDC.e.

In order to counter the debt/risk lowering process, the MOR protocol charges a greater performance fee (which it may use to generate yield with), meanwhile, the user has their debt balance — and liquidation risk — steadily reduced over a period of time.

It is confirmed that self-repaying loans will be offered for all collaterals via Avalanche at the time of launch. MOR maintains its peg by keeping the key characteristics of DAI, including over-collateralization, liquidations, and the presence of a PSM.

The self-repaying loans also help with the peg of MOR by establishing a direct flow of USDC.e every day into the PSM, even if users are not swapping their USDC.e for MOR. This approach makes borrowing and redeeming MOR a lot more seamless. And by converting a certain amount of yield generated to USDC.e and adding it into the secondary PSM, the protocol doesn’t have to wait until users repay loans in order to “realize that liquidity.”

As most crypto enthusiasts would know, there are many different stablecoins in the market. However, what makes MOR arguably more unique (and better) is that users can generate yield on their collateral while borrowing MOR with negative fees.

This makes for a combination of yield going up while debt (and risk) go down considerably. Using this approach ensures that there are no changes in the logic of contracts, which has now been mastered by the Maker team.

By using Self-Repaying Loans with MOR, users are able to benefit from a fixed yield aspect while lowering their overall risk. As a borrower, this leads to your collateralization ratio increasing a lot faster (while the debt gets repaid automatically). This approach is arguably better than accumulating additional collateral through yield.