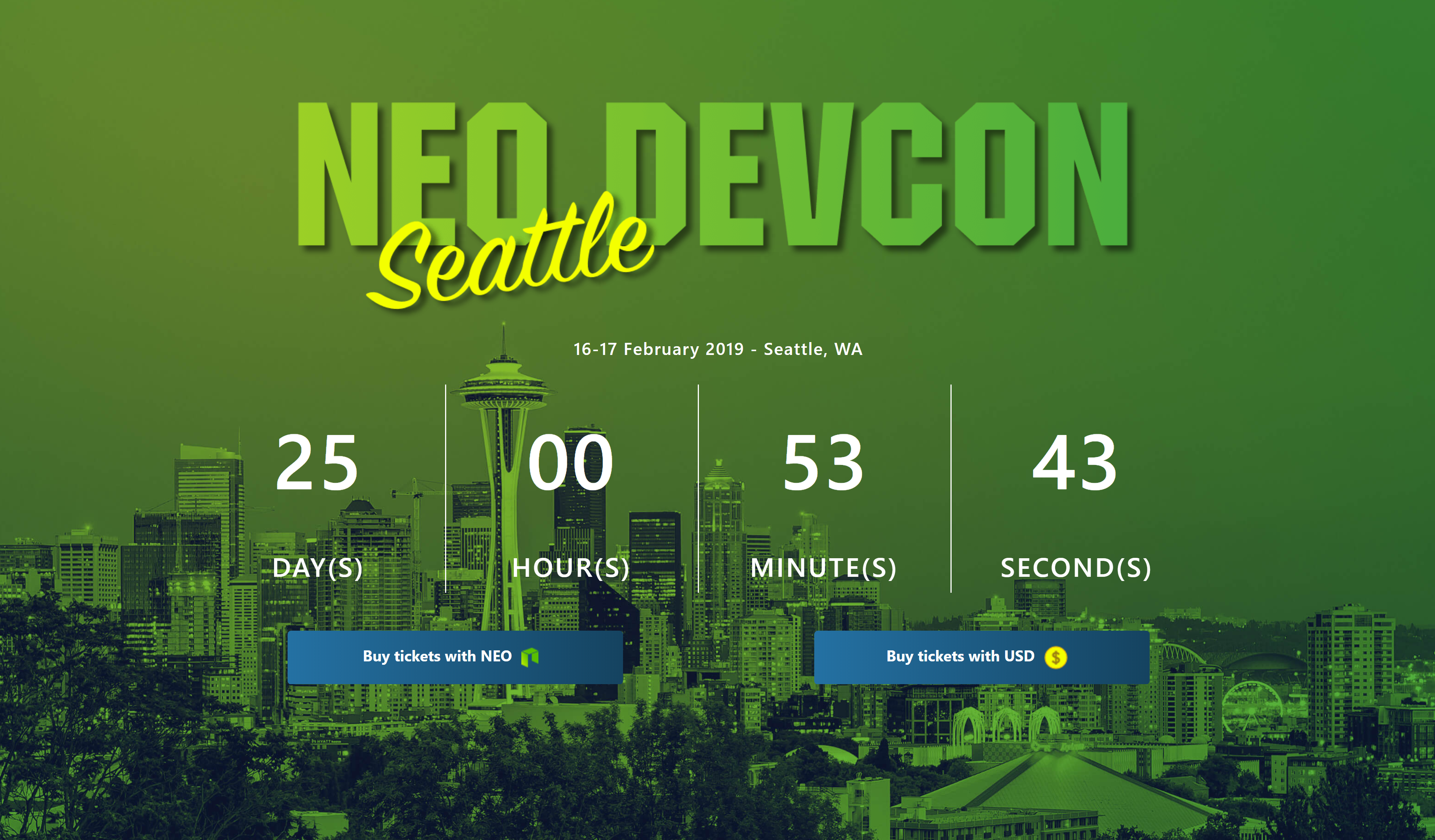 Open-source blockchain project NEO is promising an exciting mix of tech, business, and regulatory speakers at its 2019 DevCon event.

Hundreds are expected to attend the Hyatt Regency Hotel in Seattle between February 16th – 17th to listen to more than 40 speakers and view more than 30 projects across 20 separate exhibits.

In addition, NEO will host a one-day workshop that will introduce developers to the fundamentals of NEO blockchain development. With support for multiple programing languages such as C#, Python, and JavaScript, NEO aims to be the most developer friendly smart contract platform.

NEO founders Da Hongfei and Erik Zhang will open the event giving visitors insight into NEO’s promise of a Smart Economy and plans for platform growth over the next 12 months.

The rest of the opening day will focus on topics such as platform architecture, innovation, the regulatory landscape, and the transition to a Smart Economy.

Scheduled speakers include Miha Kralj, managing director of the world’s largest consulting company Accenture, who will talk about the big trends in blockchain, and Dr Chris Berg of the Royal Melbourne Institute of Technology (RMIT), who will discuss crypto-economics and its role in the future of the global economy.

Day two of NEO DevCon will shift gears and take a deep dive into technical blockchain topics such as consensus mechanisms and decentralized storage, as well as explore a range of decentralized application (dApp) use cases, patterns and practices.

The Coelho brothers and founders of NeoResearch, Igor and Vitor, will discuss how high performance computing can advance consensus mechanisms and how the NEO blockchain can be used as a problem solving network.

Representatives from ecosystem projects such as Neon Exchange, Moonlight, Blacat and Archon will also share insights on dApp development and their contributions to the Smart Economy.

“NEO’s goal is to have the ability to run large-scale commercial applications. The technology development of the blockchain will eventually land in practical applications, and we hope to serve the goals of the smart economy,” Erik Zhang, founder of NEO said.

“The NEO DevCon is a place where we can share the latest technological advances, learn about interesting applications and discuss the possibilities of future changes with relevant experts and scholars. This time we also invited some speakers from Seattle-based tech giants to share their insights with us.”

NEO DevCon will also feature a workshop for participants who are interested in learning to work on NEO’s developer-friendly platform.

The workshop will guide developers through how to set up a NEO development environment, design a smart contract, deploy to the blockchain, and interface with a smart contract.

It aims to give participants all the skills required to start building their own dApps on the NEO platform.

Anyone interested in participating or supporting the event can email: [email protected]

More information can be found at devcon.neo.org

CryptoSlots players raise $14,390 to help those affected by Coronavirus

June 5, 2020 – The crypto casino, CryptoSlots released a new slot at the beginning of May to spark its month-long fundraiser for the fight against coronavirus. All bets placed by...

Aberdeen, Hong Kong, June 2, 2020. – A Hong Kong-based cryptocurrency wallet provider has introduced a range of services that allow its users to earn passively from mining and...