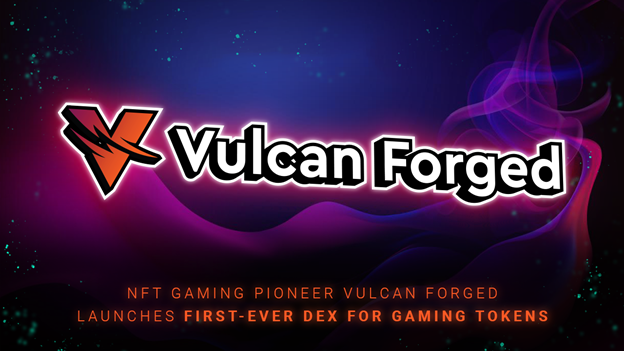 Press Release: Vulcan Forged has launched a new and revolutionary decentralized exchange for gaming tokens following the success of its gaming metaverse, VulcanVerse.

October 11th, Cardiff, United Kingdom – Blockchain gaming platform, Vulcan Forged, is announcing the launch of the first-ever decentralized exchange (DEX) purpose-built for gaming tokens, VulcanDEX. The DEX will allow users of the gaming platform to trade any gaming token without the need to register. Players will then be able to use their newly-acquired tokens in their respective game.

Users will also be able to stake gaming tokens to facilitate exchanges in VulcanDEX, with users earning rewards in proportion to their share of specific liquidity pools. The DEX currently has 4 active pools for this purpose, with several more, including $YGG, $SAND $AXS and $VNLA coming soon. Moreover, in-game assets can be farmed in VulcanDEX in the form of non-fungible tokens (NFTs), creating an active economy that involve several popular blockchain-based gaming ecosystems.

VulcanDEX is also powered by $PYR, the utility token that is the backbone of the VulcanForged gaming ecosystem. Players can stake PYR in the DEX as well as earn their rewards in it and stake it in pools in addition to other gaming tokens.

With the addition of VulcanDEX to its portfolio of games and products, Vulcan Forged has become a veritable pioneer in  the “Play-to-Earn” (P2E) space. P2E is a gaming business model that creates open economies within gaming ecosystems and rewards those who add value to games by contributing to their development. This can be in the form of contributions such as game design and development, and even beta testing new games. The idea is to give access to potential players who would otherwise pay a premium to play popular games.

Vulcan Forged has merged this emerging concept with the principles of decentralized finance (DeFi), allowing participants in VulcanForged’s gaming platform to contribute gaming tokens and other crypto assets to facilitate their exchange between decentralized gamers. Moreover, the P2E industry is relatively new, with players such as Axie Infinity and Decentraland only gaining significant popularity this year. This puts Vulcan Forged at the cutting edge of this new emerging industry.

That Vulcan Forged is in this pioneering position is no surprise given its recent success. Combined, the Vulcan Forged games are set to surpass the milestone of 200,000 users by the end of 2021. This is as a result of a number of successful developments since the start of the year for the Vulcan Forged team, including securing the intellectual property rights for iconic pieces of art to be included in their flagship in-game world, the VulcanVersre.

The works include “Egyptian Queen” by Frank Frazetta, a painting which sold earlier in the year for over $5.4 million. Frazetta is a world-renowned fantasy and science fiction artist most famous for his Conan The Barbarian illustrations. Moreover, Vulcan Forged also partnered with Arkane Network to support game-focussed NFTs built on Polygon. The expansion to other popular ecosystems in the crypto space is part of Vulcan Forged’s longer-term plan to expand access to its pioneering games and game development ecosystem.

Designed as an easy-to-play and easy-to-build ecosystem, Vulcan Forged is a community-based project that promotes the development of world-class blockchain games by supporting developers through its development programs. ‘incubation and crowdfunding.

For blockchain game enthusiasts, Vulcan Forged is a one-stop-shop where they can access popular games and a huge NFT marketplace to buy and sell digital assets in-game. The entire ecosystem is powered by its own PYR settlement, staking and utility token. The ERC20 compatible PYR is a cross-platform currency that can be used in game titles that are part of the Vulcan Forged ecosystem.

VULCANFORGED is the source of this content. This Press Release is for informational purposes only. The information does not constitute investment advice or an offer to invest.