NFTs generated a lot of big money buying this week. While that may seem like nothing particularly new, this week had some noteworthy purchases. A dubious survey brought out some chatter in NFT communities. And Axie Infinity continued to dominate sales volume for NFTs this week as last month’s NFT buzz comes to a bit of a calm.

Let’s tap in with all of the action around NFTs over the past seven days.

A Batch Of Bored Apes

Auction house Sotheby’s listed a set of 101 Bored Ape Yacht Club NFTs in a sale this week that went for $24.4MM. The auction also included Bored Ape Kennel Club NFTs that sold for another $1.8MM, bringing the total for the lot over $26MM.

The sale was the most substantial Bored Ape Yacht Club transaction to date. Besides fiat, Sotheby’s has allowed NFT buyers to pay in BTC, ETH, and USDC.

Our team reported this week on a dubious survey being floated around in NFT and crypto communities online that appeared to over-index NFT holders. The survey claimed that 18% of Americans own an NFT. The study, conducted by consumer research firm Piplsay Research, has since been deleted.

The reality is likely awareness and ownership that is a fraction of Piplsay’s report, given the public numbers available around platforms like OpenSea.

Ethereum-based gaming company The Sandbox shelled out north of $2.9MM this week for Bored Ape #3749. In a Twitter thread following the purchase, the company stated that they see “every NFT community project as the biggest creative revolution.”

The Sandbox is working on a tool that will allow Ape owners to transform their Apes to 3D playable avatars. The purchase secures The Sandbox with their 31st Ape, establishing them as one of the biggest holders in the community.

Last month’s NFT boom could be coming to a calm. Major NFT projects took a dip for the most part this week. The NBA off season has sent Top Shot out of the top 25 in sales volume over the past seven days, and the lone stronghold of NFTs lately, Axie Infinity, defied the rest of the market. Axies have done over $150MM in sales volume this week, with no other project even crossing half of that.

Additionally, Loot continues to show strong numbers, dropping in at #2 on the weekly volume chart. Bored Apes came in at #3 with just over $40MM in sales volume.

Art Blocks Are On The Block

Christie’s and Sotheby’s have shown substantial investment in NFTs this year, with digital divisions emerging and a number of different high-dollar sales that have made headlines lately.

Now, Christie’s is turning it up a notch. The auction house announced this week that on October 1st, the sale of Art Blocks Curated: Sets 1-3 will go live. The bidding will be conducted live in ETH, a first of it’s kind for a major auction house.

A costly bug on OpenSea this week appears to have burned a total of 42 NFTs on the site, deleting roughly $100K worth of NFTs from the market. The bug was first reported by ENS lead developer Nick Johnson, who transferred an NFT from an ENS account to a personal account. The bug resulted in the NFT instead being sent to a burn account. According to a statement from OpenSea, they were able to address and fix the bug within 24 hours. 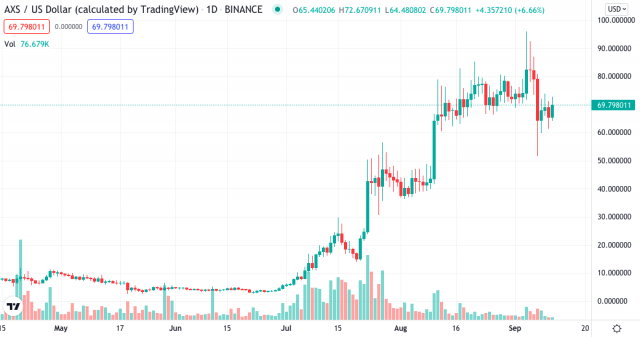 NFTs Going “To The Moon”

Every NFT project wants to eventually find it’s way “to the moon.” Few actually go there. According to a report this week from Space.com, A Kings of Leon NFT set will launch on SpaceX’s private Inspiration4 space flight. The NFTs will include songs from the Kings of Leon band and a gallery of digital art.

The NFTs will be auctioned off to raise money for St. Jude Children’s Research Hospital. While the set isn’t the first NFTs to be launched into space, it will be the most NFTs that have gone into orbit on one journey to date.

While they won’t make it all the way to the moon, they’ll at least come physically closer than most NFT projects.