Adidas didn’t hesitate to start getting their hands dirty, releasing their first-ever NFTs this week after just introducing themselves to the space in recent weeks. The political arena has now seen NFT infiltration. And one gaming studio saw such immense pushback on NFTs that they reversed course altogether.

These are just a few of the major headlines that we saw throughout this week that kept us in-tune and engaged with non-fungible tokens as we head towards 2021. Let’s take a deep dive into the past week’s action:

Adidas Sells NFTs, Nets $23M+… But Not Without Pushback

Sure, last week’s Nutshell had a lot of brand activity. However, this week’s corporate NFT news was dominated by three stripes; Adidas brought in a few different crypto-native NFT partners to assist in the process, and while the tokens sold out in a matter of seconds, many in the NFT community have had some gripes about how it all went down.

Quick 🧵 on how they did it

S.T.A.L.K.E.R 2 is a new video game in development by Ukrainian indie gaming development studio GSC Game World. With the game’s release on the horizon, the development team announced their intent to include NFTs within the title – which left gaming fans sour. The team released a full-page statement on their reasoning behind the decision, but subsequently deleted it, and now the GSC team looks to be scrapping the inclusion of NFTs from the title altogether.

Gaming and crypto continue to butt heads in a space that many expected to be less rigid than it’s come to be.

NFTs Make Their Way Into Politics

A couple different stories hit the newswire this week around NFTs in an area that we haven’t yet seen a lot of activity in: politics. While both stories came from each side of the political aisle, Solana was the blockchain of choice for both individuals. The first headline was the announcement of Melania Trump NFTs on Solana, which will be sold for 1 SOL. A portion of the proceeds are reportedly going towards foster child charities, however which charities – and what that portion actually is – are details that have not come to life, leading to substantial criticism.

On the other side of the table, California Democratic congressional candidate Shrina Kurani, who is running for a House seat, made news this week for her release of 2,022 Solana-based NFTs as a part of her campaign. Kurani sees regulatory holes that need to be filled, and has also emphasized greater education around blockchain technology.

Right now is a prime opportunity for individuals in politics to earn headlines with minimal spend by NFTs, but unfortunately, the actual impact in the political arena that NFTs could serve is a world that we’re likely still very far from.

Could NFTs Take Over Traditional Art?

To those familiar with NFTs – the idea of hanging your digital art piece on your living room wall probably isn’t foreign, or hard to grasp. In fact, increasing companies that are looking to build consumer products around the likes of ‘NFT frames’ continue to come into the market.

One notable name in NFTs, Cozomo de’ Medici, believes that “NFTs will flip traditional art.” Check out the full story from our sister network NewsBTC. 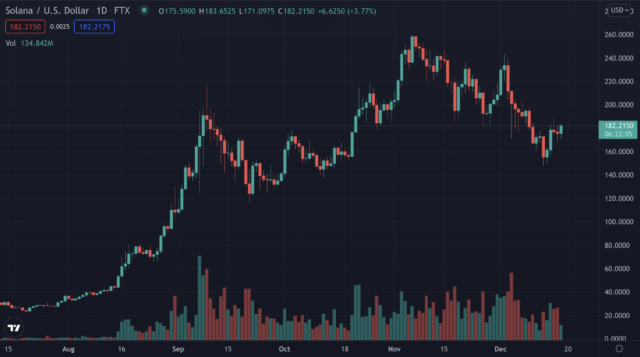 The lack of enthusiasm with NFT releases isn’t limited to just gaming this week.

Funko Pop is a notable name in collectibles. On any given weekend, the Hollywood Boulevard Funko Pop storefront in Los Angeles’ has a line practically circling the block. Funko’s have a distinct set of characteristics and have become a stapled collectible. However, Funko’s latest Bob Ross figurine, which is slated to have a corresponding NFT release on December 21, has received substantial pushback from fans as well. It remains to be seen if Funko will follow through with the anticipated release.

It’s been a quiet few weeks, going on months now for meme-tokens like Dogecoin. The buzz has seemingly subsided, at least during this part of the crypto cycle, as chains like Avalanche and Terra have been aggressively pursuing top 10 market cap positioning. However, Dogecoin is still active of course – and this week the chain found itself host to it’s first ever NFT minting. Could it signal a more serious position of Dogecoin moving forward? Read the full story from Bitcoinist’s very own Best Owie in the full publication earlier this week.