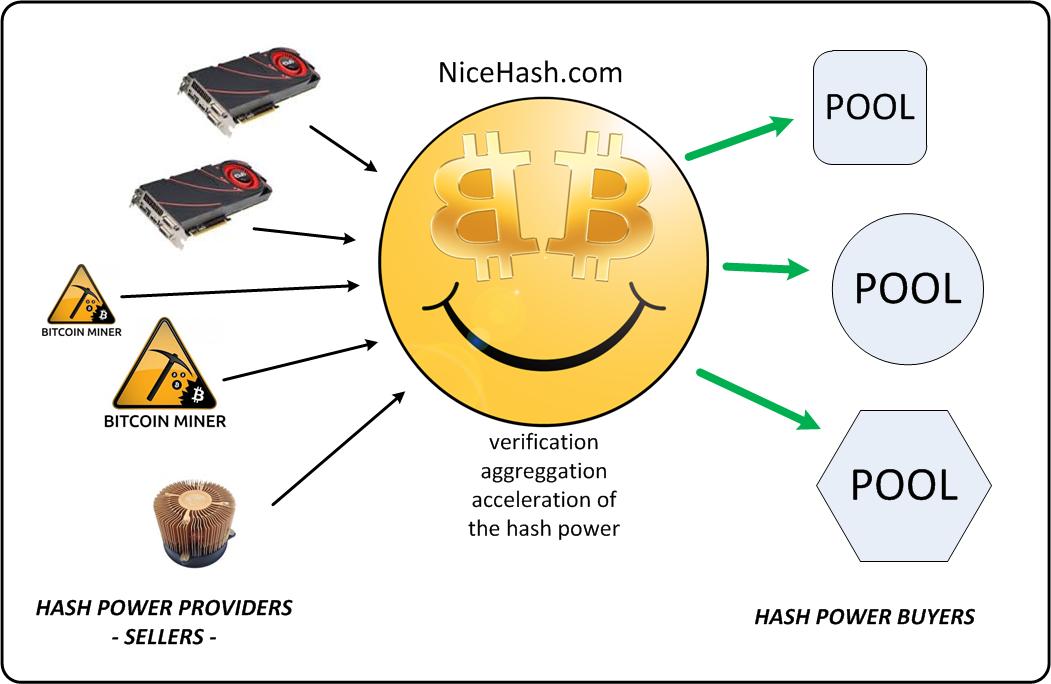 Now users can rent hashing power by simply placing an order and lease their rigs as simple as using a multipool thanks to NiceHash, the most advanced crypto currency cloud mining, hash rental and multipool. With its worldwide presence, NiceHash is optimal for hashing power sellers i.e. mining rigs owners and hashing power buyers located in Europe, Russia, USA , China and other near regions as well.

Thus, this cloud mining and hash rental service provider, where users can buy or sell hashing power without contracts on the pay-as-you-go basis, is emerging as a popular choice. It gives comprehensive flexibility for renters and rig owners as they don’t needn’t worry with risky mining contracts or renting/leasing rigs as they can sell or buy hashing power directly from NiceHash that brings attractive deals for more them.

Disclaimer:  Bitcoinist is not affiliated with NiceHash and is not responsible for its products and/or services.

Elaborating about the modus operandi of NiceHash their website writes that it works similar as an advanced pool where rig owners point their rigs towards NiceHash advanced stratum server. NiceHash stratum servers verifies, aggregates and accelerates the hash power of the connected rigs and points the power to the pools that buyers set’s within their orders. This is an innovative concept, pioneered by NiceHash, followed by additional innovative features such as the innovative Best Profit Auto-Switching Multi-Algorithm Mining which makes it easy for users to start earning some Bitcoins ASAP without day-to-day rig management and monitoring for profitable altcoins. 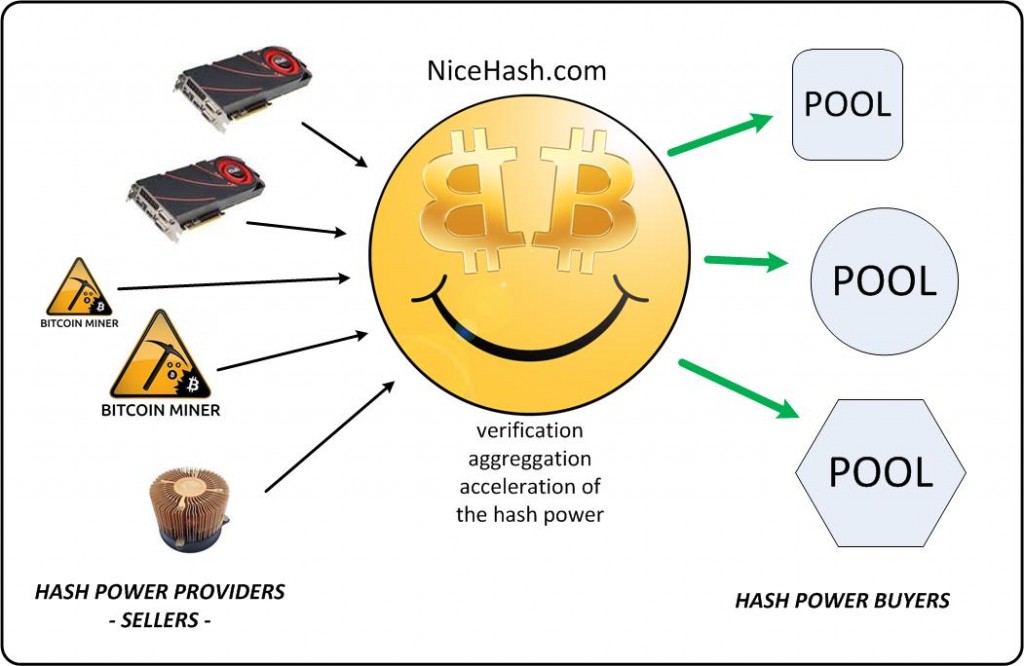 Additionally, NiceHash has brought a solution to GPU miners as well as cloud mining users where its best profit auto-switching multi-algorithm mining mode provides careless operation and highest profits for GPU miners. Moreover, as NiceHash.com is hosted on a professional servers infrastructure, it is able to work hard to provide highly-available and secure service to the users. The company says:

“If you’re looking for a quick start in mining, weather you’re using GPUs, SHA256 or Scrypt ASICS, you can simply connect any of your miners to NiceHash and get a one-stop-service for all your miners.”

NiceHash Is Popular for Its Hashing Power

There are several reasons that are being cited by NiceHash why it has emerged as a popular choice among users when it comes to hashing power; for instance, according to the company users here pay for exactly what they want i.e. they pay only for accepted shares, whereas in case of rig renting at some of competitive services this is not the case and the renter carries the risk of getting unstable or misbehaving mining rigs. Similarly, buyers of hashing power at NiceHash never pay for dead or faulty configured rigs. Moreover, as it is a simple way to create orders instantly and cancel any order at anytime as well as using secure online wallet for fast purchases, users tend to prefer it.

Example of detailed statistics for each buying order

NiceHash has chosen BitGo Enterprise services for their online wallet, providing users with secure multi-signature wallet, covered by BitGo insurance policy. Least but not the last, the users can mine their coins with massive hash rates, a feature that most of them are always looking for. NiceHash makes it easier for users to buy hashing power as they are showed a short video how-to tutorial to get a quick glance of how NiceHash works and how they can buy and use hashing power. And there are even more new features for hashing power buyers. NiceHash just recently released a beta version of NiceHash Live Marketplace, allowing hashing power buyers to monitor the whole NiceHash hashing power marketplace in real-time; the beta version of this market place is available here.

Ideal for the Users Willing to Sell Hashing Power

NiceHash is also a right option for those who want to sell hashing power as it is simple as using a multipool with PPS. Also, the system gives the sellers keep the peace of mind while selling their hash power as buyers are not directly affected if the rig goes offline. They don’t also need to make any refunds or time extensions. Not just that, users can be paid more than any multipool pays which they get through an automatic payment in Bitcoins up to 4 times a day. Moreover, as there is no need for registration and no limits put, users can use as many rigs as they like. Least but not the last, graphical and textual statistics are also made available for users. 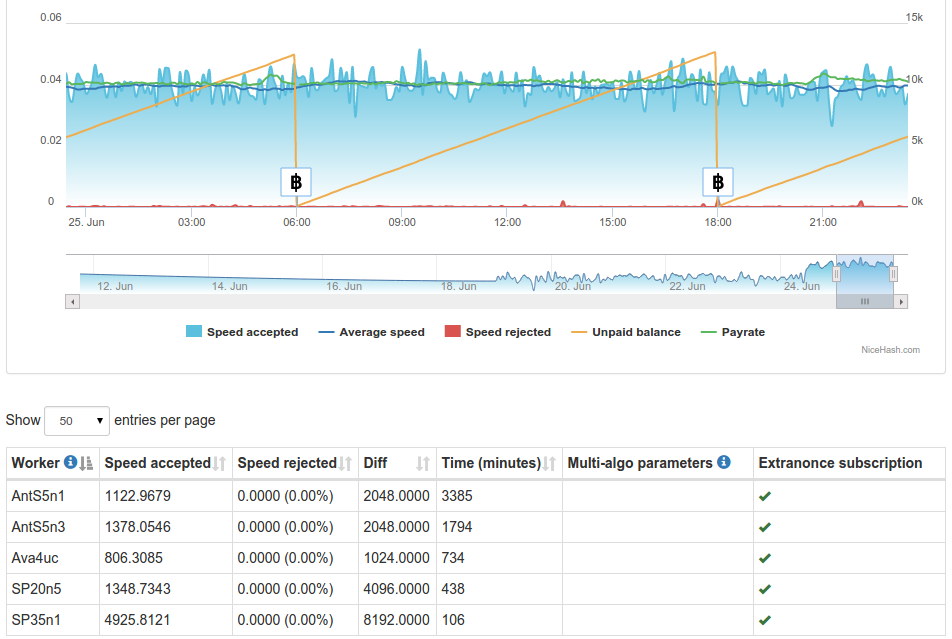 Example of detailed statistics of each connected seller’s miner