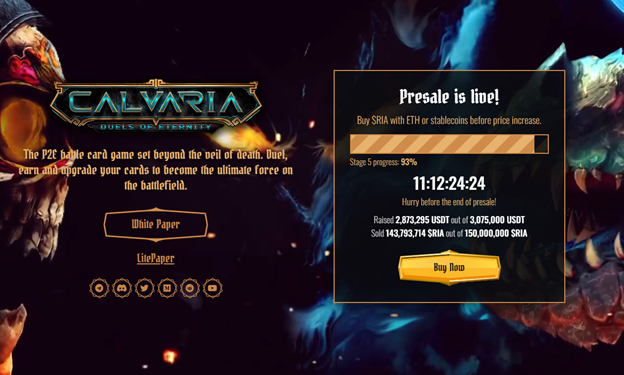 Only $200K Left in Calvaria Presale as Exchange Listings Lined Up

One of the biggest trends in the crypto market has been Play-to-Earn, otherwise known by the short form P2E. This has greatly impacted how crypto projects incentivize people to interact with ecosystems, and even the existing gaming world has taken note of the mechanics. However, that doesn’t mean there isn’t room for improvement.

The P2E space stills seems alien and inaccessible to the broader gaming public, and crypto projects can do a lot to attract such users. That is exactly what Calvaria is doing, and the project is executing a number of design choices that can change the P2E landscape. It is currently in the final stage of its presale – a highly successful one – and investors may want to jump in before it closes.

P2E Offers Enormous Potential, and Calvaria is Building On it

The P2E model has been taking the world by storm. By letting players earn for doing something they already love, the model implements a clever incentive mechanism that can significantly boost a user base, especially as the model improves over time.

Many projects are doing this, but Calvaria is one worth watching as it offers features and design choices that other projects don’t seem to. One of the key features is accessibility.

Calvaria is Making Waves in the Crypto Space

Calvaria is a P2E card battler game. You may have seen many of these before, as card battlers are a common type of P2E game. However, Calvaria offers many features that set it apart from other such games.

The project is focused on making the game as accessible as possible, which allows for an enormous player base in comparison to other games. With accessibility as its main mantra, the game can attract those inside and outside the crypto space. Players don’t need a crypto wallet, hold crypto, or buy any assets to start playing and try many features. The game is available on both desktop and mobile devices. Furthermore, there are both Play-to-Earn and Free-to-Play modes for the game.

The game is set in the afterlife, with various factions vying for power. Unlike other games, there is a story mode for fans of single players to participate in. This is one feature that makes the game appealing to as many people as possible. It also has striking artwork.

As such, players with no crypto experience can enjoy the best that P2E has to offer. They might even learn a few things about crypto. You can see how Calvaria is different by looking at the image below, which compares it to other games of this kind. 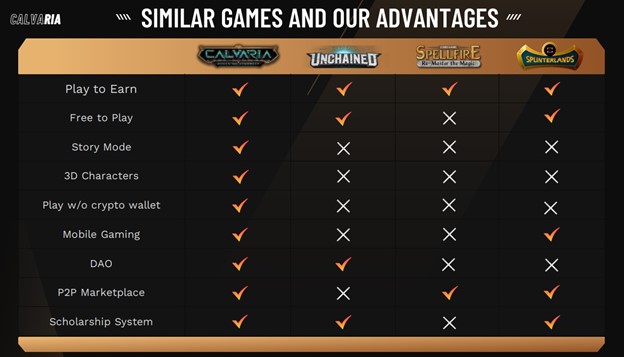 Calvaria has many unique features.

Of course, those who participate in the F2P mode will not have access to the blockchain-based features – but they still get to battle other players. It’s a good gateway into the crypto space, and you can be sure that many people will transition into the P2E mode. The latter has a few features unavailable in the other versions, like the ability to receive royalty payments, wager on tournaments, and sell decks, cards, and upgrades. Players don’t even have to engage in PvP combat to earn tokens.

Calvaria also has other features that are worth noting. These include staking the RIA token for rewards, a scholarship system, mini-games, and an in-game store. You can learn about all of these features in the Calvaria whitepaper. Combined, this offers a robust system for players to enjoy, giving them multiple ways to earn. The project is genuinely trying to revolutionize the P2E space.

Of course, this is a decentralized project, and the team is very focused on ensuring that the community decides how the project will turn out. As such, there will be a DAO that makes use of the RIA token. The team believes this is crucial to the project’s long-term success, and so far, it looks like Calvaria is well on the way to that success.

This is probably why the Calvaria presale has been so successful so far. Investors have flocked to it, hoping to get the token well before it hits centralized and decentralized exchanges. We explain what the final stage of the presale is like below – so pay close attention as you might not get another chance to enter it.

Check Out the Calvaria Presale

Calvaria’s Presale is in the Final Stage

The final push before presale is closed! Not many days have left!https://t.co/xB0JFvM6el#calvariagang

Now that you have an idea about what Calvaria is like let’s talk about the RIA presale, which is in its final stage, with only about 7% of tokens left. The project has already seen massive success for its presale, having raised over $2.8 million. There are just over 6 million RIA tokens left up for grabs.

The token can be purchased with ETH or stablecoins, with 1 USDT giving you 30.77 RIA. Unfortunately, you won’t be able to get it at a lower price, as the project has already announced partnerships and listings on various exchanges.

Partnerships include ones with Gotbit and KuCoin Wallet, both of which have a significant impact on outreach and adoption. The project has also announced listings on LBank, Changelly, and BKEX once the presale is over.

As a result, the end of the presale will likely lead to a significant jump in RIA’s value. Investors who have been on the fence will want to get in on the presale now.

Calvaria is all set to make a tremendous difference in the gaming world. Unlike other projects in the space, it is actively taking steps to ensure that everyone feels welcome, and this can go a long way in legitimizing the P2E space.

We highly recommend taking a look at Calvaria before the presale ends. It won’t be long before the tokens get sold, so consider hopping in to get the token before it gets listed on exchanges.

Check Out the Calvaria Presale