OpenBazaar, the decentralized marketplace, released it’s beta 2.0 on September 30, and will be releasing a new beta at the end of each month until the end of the year when the full release will go public. 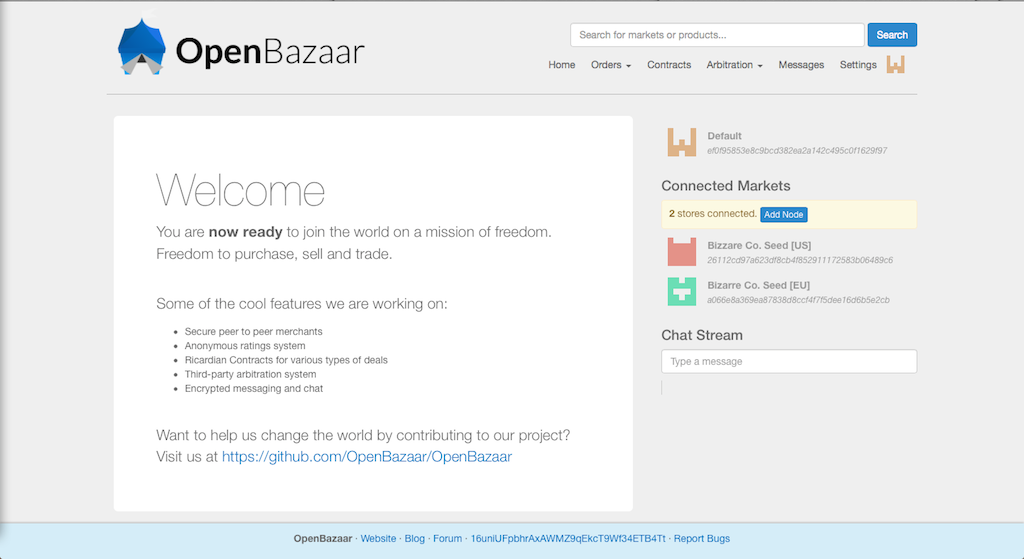 Homepage of the OpenBazaar Beta 1.0 marketplace.

OpenBazaar is an open source, peer-to-peer, and decentralized online marketplace. The developers intend the creation of a truly free marketplace where anyone may sell goods using peer-to-peer technology. But doesn’t that mean that even illegal goods can be sold on here? Exactly. The OpenBazaar developers claim that they envision an uncensored eBay with no middlemen, but they have received criticism for creating a “Fed-Proof Bitcoin Marketplace” that ushers in the next generation of digital black markets. Similar to how Napster evolved into Bitorrent after Napster had to file for bankruptcy and liquefy its assets because it was getting slammed with lawsuits from Metallica, Dr. Dre, and the RIAA, the Silk Road was brought down by the FBI and is now evolving into OpenBazaar, the Bitorrent of digital black markets.

OpenBazaar can be downloaded from github and installed by following the tutorial. The software runs on your computer and communicates directly with other OpenBazaar users creating a decentralized server system that cannot be easily attacked, and unless the entire power grid is shut off, OpenBazaar will stay online. Once OpenBazaar is successfully installed on your computer, you can browse the stores on the network, create your own store, offer arbitration services, and send encrypted messages. A couple of the useful features coming soon are an “anonymous rating system” and “Ricardian Contracts for various types of deals.”

Check out our video tutorial on installing OpenBazaar and get a sneak peak of the marketplace. If you realize you are curious about the history of OpenBazaar and the Silk Road, check out Nuno Menezes’s article on Bitcoinist.net. For now, OpenBazaar is very much in its early stages with early adopters signing on and creating test stores and products as they begin to familiarize themselves with the platform, but we should see rapid improvement in the software throughout the rest of the year as the full release date nears.