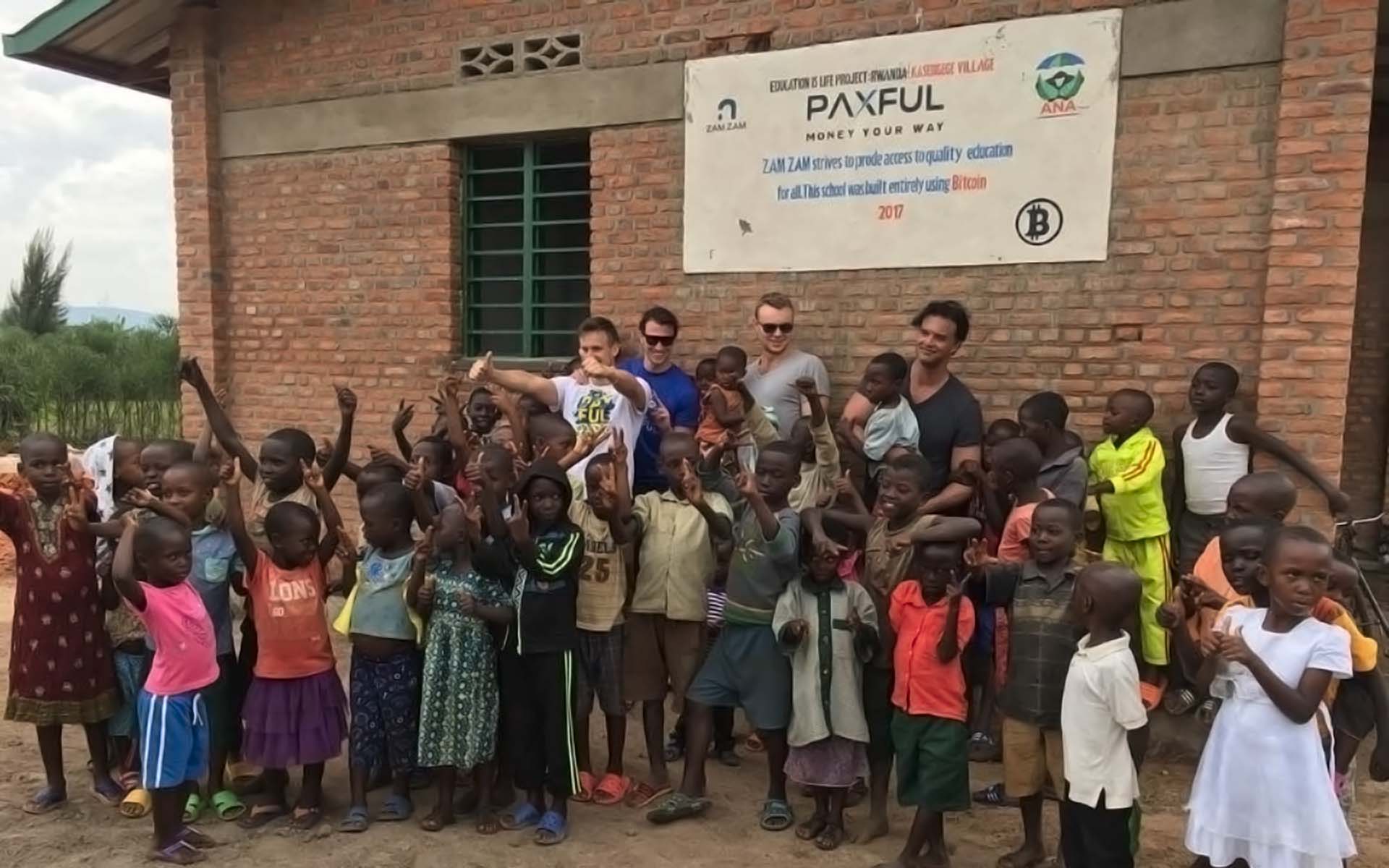 Paxful to Make the World a Better Place with #BuiltwithBitcoin Initiative

Paxful, the peer-to-peer cryptocurrency marketplace, has launched the #BuiltwithBitcoin initiative to improve the lives of others via direct action.

Throughout 2017, news about Bitcoin and other cryptocurrencies focused on their ever-increasing value. It became commonplace to read about the latest Bitcoin millionaire and how many people were becoming rich due to cryptocurrency. Yet lost in all the hype and buzz is the fact that Bitcoin can also serve as a vehicle for doing good in the world. Making the world a better place is the hallmark of the #BuiltwithBitcoin initiative started by Paxful, the peer-to-peer cryptocurrency marketplace.

One of the hallmarks of Bitcoin is that it allows for individuals to make financial transactions without the need for third-party entities, such as banks. This economic freedom is much more important than one would think because the reality is that 40 million Americans do not have a bank account – and that’s just one country. The number of unbanked people worldwide is estimated to be over 2 billion. This means that many people are shut off from vital economic services, severely limiting their opportunities and dreams.

Paxful fully understands this reality and has created a peer-to-peer marketplace where people can buy and sell cryptocurrencies through more than 300 different means, including gift cards, credit cards, cash, and more. Through their marketplace, Paxful allows the unbanked to take economic freedom into their own hands and gives them the ability to make their own individual decisions without the need for any centralized financial institution.

Paxful also knows that cryptocurrency enables people to help others through direct action by donating to worthy projects without any third-party, bureaucratic interference. This is why they started the #BuiltwithBitcoin initiative, to allow people to use their cryptocurrency to make the world a better place. One such place where #BuiltwithBitcoin has already made a difference in Rwanda. 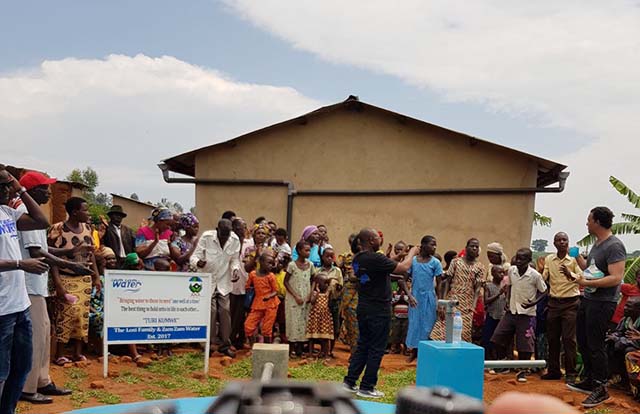 Paxful teamed up with Zam Zam Water to build a school for young children in Rwanda. Paxful donated $50,000 in bitcoins to the project, which saw the construction of the first nursery education center in the country. It will serve children between the ages of 3 and 6. The new school features 3 classrooms, 4 restrooms with a potable irrigation system, and a 15,000-liter water tank.

Why start the #BuiltwithBitcoin initiative in Rwanda? The answer is hope. Rwanda was the scene of the brutal Rwandan Genocide in the early 1990s that saw up to a million people slaughtered. However, the government and people of Rwanda have embarked on a path of reconciliation and forgiveness, ending all tribal feuding and putting the past firmly behind them in order to create a better country for future generations. Paxful was awed and humbled by the generous, forgiving nature of the Rwandan people, so choosing the country as the beginning of the #BuiltwithBitcoin initiative was a no-brainer.

The nursery education center in Kasebigege Village is just the beginning. Paxful plans on building 100 schools in Africa through their #BuiltwithBitcoin program. The peer-to-peer marketplace plans on expanding the charitable work to countries that are in dire straights, such as Nigeria and Venezuela. Paxful firmly believes that Bitcoin was created for the people that exist in such situations, cut off from traditional financial institutions but eager to forge a new, and better, path for themselves and their communities. Since #BuiltwithBitcoin involves direct action, this means that 100% of all donations go toward actually helping people. 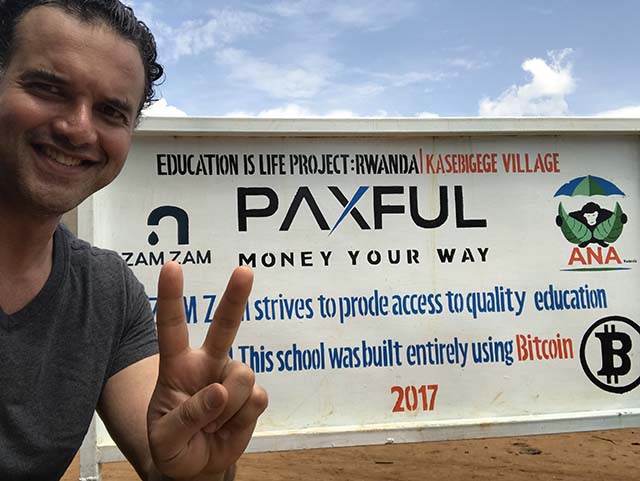 As Paxful is working in regions that are mired in dire economic circumstances and that their marketplace features items like gift cards, they are fully aware that some people are concerned with the possibility of fraud. This is a reasonable concern in that the internet has allowed scammers to operate from anywhere in the world just by sitting in front of a keyboard.

Paxful is not a scam. They are extremely serious about operating a safe and secure marketplace that allows the underbanked and unbanked to buy and sell cryptocurrencies. Paxful ensures that all buyers are 100% protected. They verify and check all sellers, as well as offering the highest level of encryption and professionally audited security.

There are tremendous challenges in entering emerging markets, especially with fraud. People laugh about Nigerian scammers, and they do find their way onto Paxful in order to scam other Africans. That being said, Paxful takes scams very seriously, and we have deployed an AI code named Charlene to protect people in emerging markets from scammers. No one else has dared to take this challenge on of providing full services to the underbanked, but we see it as a key value and a form of giving back as solving this problem will really open up the flood gates of commerce in emerging markets.

Overall, Paxful looks at providing an economic marketplace to emerging markets as just the beginning. Their #BuiltwithBitcoin initiative goes much further by encouraging cryptocurrency holders to put their bitcoins to good use by directly supporting projects that look to improve the quality of life for others. The decentralized economic freedom offered by cryptocurrency allows people to improve the world without any government or bureaucratic rules or red tape. Bitcoin is for the people and of the people, and it can be used to lift others up through projects like #BuiltwithBitcoin.

What are your thoughts on Paxful’s platform and #BuiltwithBitcoin initiative? Should more crypto businesses follow their example and give back? Let us know what you think in the comments below.