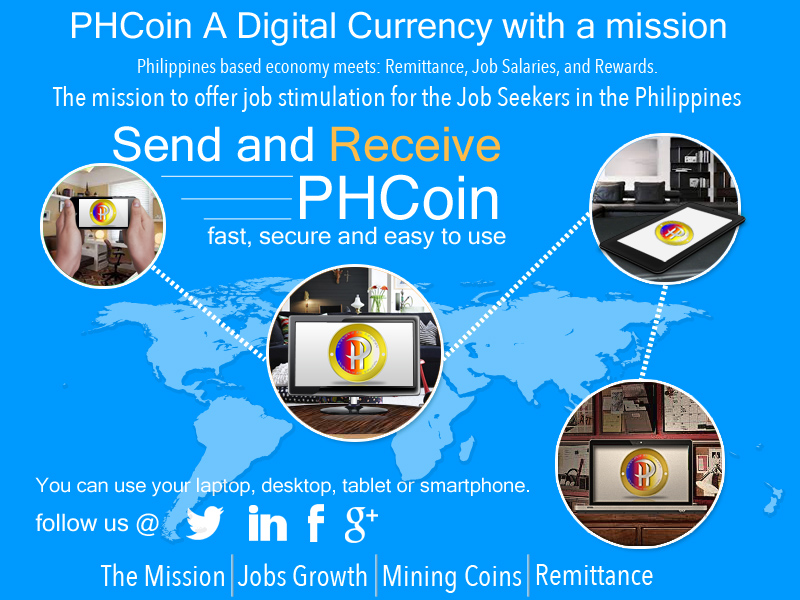 PHCoin: Crypto for the Philippines

The Philippines, as you know is full of cryptocurrency startups and activity , such as Rebit for sending money online, to the recent partnership of Dragonpay and BuyBitcoin opening up 12,000 locations where Bitcoin can be bought. So it wasn’t long until a cryptocurrency paid tribute to the Philippines. Meet PHCoin. In the process of making this article, I have talked to many people on the PHCoin team, and they are all very excited to see this coin succeed.

PHCoin’s lead developer, Mike Scofield, has been proactively working on PHCoin’s concept since January of 2014. His initial concept was to follow Litecoin’s Algorithm, launching PHCoin as a Scrypt mining crypto currency. Upon research and discovery, it was obvious that most Filipinos do not own expensive GPU’s to begin mining a crypto currency, Mike Scofield quickly took PHCoin mining in a different direction with the emerged mining algorithm known as X11.

Mike Scofield, and the PHCoin Team realized X11 was the right direction because it’s easier for anyone to load up the PHCoin miner to begin earning PHcoins with virtually any computer or laptop. It was also clear that Philippines residents must keep mining affordable enough to continue mining; therefore, X11 was the right direction because it offers a reduction in electricity costs, and miners don’t need to invest thousands of dollars in hardware. In fact, most Filipinos are scrambling to use any/all computer and laptops available at their disposal to mine PHCoin.

Mike Scofield is proactively working on developing the PHCoin Network by offering on-going upgrades to the existing Windows wallet, Linux wallet, mining software, and introducing the first launch of the PHCoin Mac wallet. The PHCoin Foundation believes on-going development is crucial to the future growth of a healthy network. The PHCoin Foundation also plans to release new features to the wallet that have never been released in the digital currency industry.

Currently, the PHCoin Network is staying afloat around 1 GH/S of network hash rate. It has successfully minted about 51,000 Blocks (worth of 50 PHC each) and we are quickly approaching block halving once the network reaches block #135,000… taking the mining reward from 50 PHC down to 25 PHC in less than 2 months from this article.

3. For our readers, what is Proof of jobs?

The official team that will begin the first attempt to hire freelancers anywhere in the world to adopt PHCoin as the Global Payment provider and solution to millions of Jobless people all over the world. The distribution of Proof of Jobs begins as the official PHCoin Team will begin hiring.

The team launched its software of the PHCoin Network on May 26, 2014 with a mission to help the Philippines and stimulate jobs all over the world. Proof of jobs will enable payroll and proof that each employee gets paid a salary. The new open positions within the PHcoin team are mostly software developers and then transition to position to educate and support the general public about PHCoin the digital currency for the Philippines.

4. Do you plan on staying limited to Philippines?

Also, PHCoin is used as a remittance option because it is a much lower cost solution compared to traditional methods like Western Union, PayPal, Bank Wire Transfers and other methods. Friends and Family of Philippines residents abroad will use PHCoin as remittance because its more afforable and easier for both senders and receivers of PHCoin.

Touching on the Job Platform some more…. Why?

The mass population in the Philippines have great English skills, and they’re eager to offer their services and expertise to small to medium sized businesses that could use the help to grow their business at an affordable rate. The traditional rate abroad the Philippines is not the same evaluation, therefore, Filipinos are willing to work for less, and still continue to meet the satisfaction of their employer. This is not only for the Philippines because other freelancers all over the word can hear about PHCoin and become a freelancer as a lower cost solution compared to traditional methods.

5. Pre-mined coins (heavily premined ones especially) get a bad reputation. How do you plan on dispelling that?

The PHcoin Foundation is a non-profit legal entity here in the USA. We are bound by law and therefore operate in that fashion. We are accountable, responsible, and transparent. PHCoin Foundation created PHcoin, the digital currency, with its Proof of Jobs which requires a payroll in PHcoins.

The PHcoin Foundation will hire up to 200 employee to handle the jobs platform support, general and administrative personnel and sales and marketing personnel. We incentivise our staff and freelancers to have a Pension Plan and an interest bearing savings wallet. The Pension Plan and interest bearing wallet is an unfunded liability which PHCoin will be used to cover those liabilities.

There are many ways we plan to distribute coins in a transparent way. Proof of Distribution will be released soon that will publicly display Team Salary, Team Rewards/Incentives/Bonuses, and its pension plan. It will include the amount of funding through social media (in total) and specifically which addresses received how many coins, the transaction ID, and the date of distribution.

The current block explorer has proof of the economy: http://phcoin.no-ip.biz
While proof of distribution will be found on a different link once made public.

Jobs Platform 2.0 will included an escrow feature that will allow the exchange of ideas or material between parties for revisions or action completion. The Escrow system is similar to a contract agreement with an additional feature to ensure funds are held within the jobs platform until both parties have agreed to their satisfaction.

A rating system for business and freelancers to fairly gauge performance for both parties. A career development system for freelancers to acquire and accelerate in their work with an online distant learning/CBT program.

An online chat/video web portal so both parties can better elaborate on job requirements or active hiring pre-screening to be more immediate and concise. Our support team will ensure both parties are completely satisfied by on-going survey’s and leave a feedback option.

As of right now, we have a waiting list for freelancers to get invited as soon as it launches to the public. The countdown is included with details of the advantages for freelancers using PHCoin and accepting it as a currency for employment opportunities within the job platform.

Employers are waiting in line for the jobs platform to launch at  http://employers-invite.phcoin.org  to being using PHCoin to hire new team members.