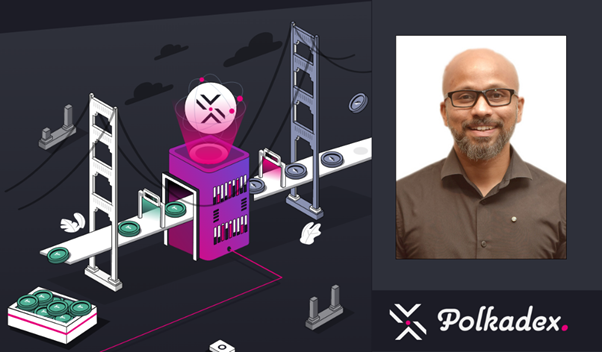 Polkadot’s parachain auctions have been one of the most hotly anticipated events in the platform’s history. After the first raft of projects battled it out during November and early December, now the auctions for slots six through eleven are underway. And one of the contenders vying for a slot is Polkadex, the order-book-based DEX built for the Polkadot ecosystem using Substrate.

The project launched its crowdloan in January, offering participants the chance to earn rewards in Polkadex’s native $PDEX token in return for loaning their $DOT to be bonded in a parachain. It’s a somewhat unique value proposition for participants, as $PDEX is already a traded token, whereas many Polkadot projects only launch their tokens once they’re up and running on a parachain.

Despite being right in the thick of the crowdloan process, co-founder and executive director Vivek Prasannan recently took some time out of his busy schedule to sit down for an interview with us. Prasannan has been in the blockchain and crypto space since 2013, having been an early adopter who tried to experiment with mining bitcoins from his office using a 44GH/s mining board.

Since then, he’s been involved with research and investing in projects including Ethereum and BitShares, with a particular focus on improving the user experience of decentralized exchanges. In 2019, he met Polkadex co-founders Gautham J and Deepansh Singh as they were working on an innovative new stateless consensus algorithm. In 2020, they decided to launch their DEX on Polkadot, and the project will go live on mainnet in 2022.

How is the sense of competition between the projects competing for parachain slots? Would you say it’s more competitive or collaborative?

I definitely think it is a collaborative effort between the different projects involved with Polkadot because, in one way or the other, the use case of one project adds value to the other. For example, if more projects launch in the ecosystem, more listing opportunities arise for Polkadex, and we’ll see increased liquidity in the order book and pools as a result. Open-source ecosystems tend to promote collaboration, and Polkadot is no different.

Which other parachain projects are you most excited about?

It is not easy to pick any one particular name here – all the parachain projects have their own unique value offering to the ecosystem. But I will say that we are closely following Moonbeam (Ethereum-compatible parachain) because it adds tremendous value for projects coming in from the Ethereum ecosystem, which is still the biggest platform for development activity, so it’s crucial to be able to bridge that into Polkadot. I am really excited about the work they do and the impact it will have on developers coming from the Ethereum community.

For the benefit of the non-tech people, can you explain a little more regarding Substrate? What actually is it, and how does it help people who want to build on Polkadot and Kusama?

Substrate is the most modular blockchain framework with a great community. It allows developers to create blockchains that are application-specific and provides a better user experience because any developer with generic programming skills can use it. Although you can build a blockchain using Substrate without connecting to Polkadot, building with Substrate actually opens the door to the Polkadot and Kusama platforms because the infrastructure is naturally in a plug-and-play state with those two platforms. Therefore, projects that build on Substrate have the opportunity to tap into the entire ecosystem.

How important is Polkadot and the parachain model in realizing the vision of Web3?

Polkadot and the parachain model is the scaling solution put forward by Dr. Gavin Wood, one of the co-founders of Ethereum. He envisions a world of multichain ecosystems connected by a relay chain like Polkadot. This will be an enabler of bringing about the Web3 vision where decentralized architecture helps distribute control of data and value away from centralized entities and to individual users’ wallets.

Polkadex is one of the few exchanges using an order book model. Can you elaborate on the advantages of the order book model over automated market makers and what it means for traders?

The traditional financial market has always used the order book model, but when earlier DEXs attempted to replicate this on a blockchain, they struggled due to low liquidity. High fees meant that these DEXs weren’t profitable for market makers, so another solution was needed, and AMM models came about due to the need to compromise to make trading possible on the blockchain.

However, order books provide better price control to traders, giving them visibility of the execution price rather than specifying a tolerable slippage. The order book also allows traders access to more features like limit orders or stop-loss orders which aren’t possible with bonding curve-based AMMs. Our biggest value proposition is to combine the benefits of AMMs with an order book-based liquidity pool. Order book exchanges are critical to attracting professional traders to the DeFi space.

Thanks to Vivek Prassanan for his time and insights.