Pompliano Labelled ‘Crazy’ For His 50% Market Exposure to Bitcoin

Morgan Creek Digital co-founder Anthony Pompliano received a verbal beating for disclosing that 50% of his portfolio is in Bitcoin. Question is…is his lack of diversification a bad thing?

Earlier this week, Anthony Pompliano participated in a CNBC Squawk Box panel which discussed macro-economics and its impact on Bitcoin price action. One panelist asked Pompliano what percentage of his net worth was invested in Bitcoin and Pompliano resolutely said 50%.

Panelist Kevin Oleary, a well-known Canadian businessman, swiftly pounced on Pomp and administered a verbal beating, along with a quick lesson in the economics of investing.

That’s crazy, I forbid that, that’s insane, that breaches everything about diversification investing!” 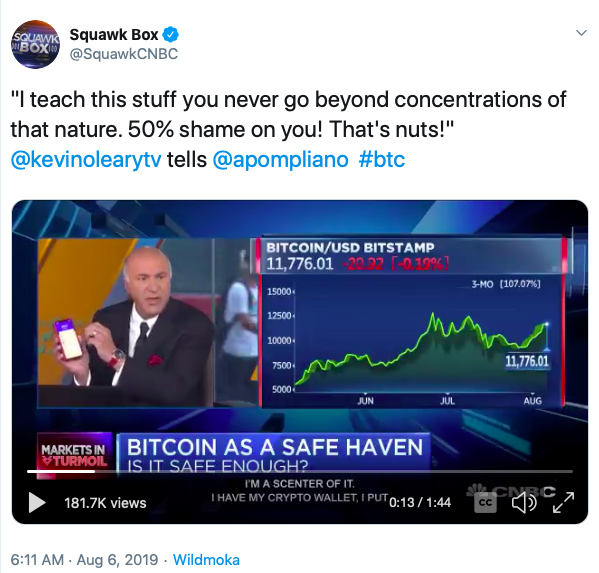 O’Leary then rattled off a list of top-10 altcoins, pointing out their significant losses since 2017, then asked Pompliano, “If this is really such a great idea, when is there only one Vegas game working?”

Pompliano did his best to explain why institutional and retail investors should make an allocation for Bitcoin as it is a scarce asset that is non-correlated to traditional markets, and is also a hedge against macroeconomic instability.

While traditional economists, financial advisors, and market analysts are likely to agree with O’Leary’s scolding of Pompliano, a cryptocurrency analyst from Twitter swiftly came to Pompliano’s defense.

@RhythmTrader pointed out that despite a 200%+ gain from Bitcoin, 60% of Bitcoin hasn’t moved for more than a year.

This statement aligns with recent data released from CoinMetrics which also showed that Bitcoin’s ‘untouched supply’ had risen to a new high of 21.6%.

The report also observed an uptick in the origination of new Bitcoin addresses. RhythmTrader then asked, “if doubling their wealth isn’t enough to part them with their Bitcoin…then what is?”

Alistair Milne also chimed in and tweeted that while it may seem absolutely crazy to invest 50% of one’s net worth into Bitcoin “anyone who “HODL’d since 2015” has seen 60x returns. According to Milne, “it would have only taken a 1% allocation” to bank at least a 50% return. 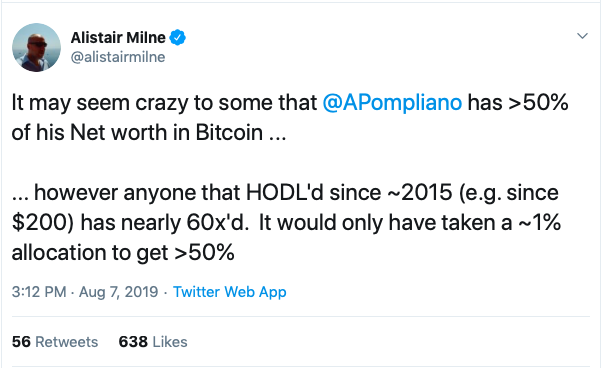 Good Things Come to Those Who Wait, for Bitcoin

Of course, investors should carry out due diligence prior to investing in any asset, especially ones that are known for their volatility. Also, while investors are encouraged to diversify their portfolios, it should be noted that Bitcoin is not a stock.

It has no need to generate revenue, it doesn’t answer to a board of ‘shareholders’, it is not controlled by any centralized entity. Putting all one’s eggs in one basket is risky but RhythmTrader left his followers with this: 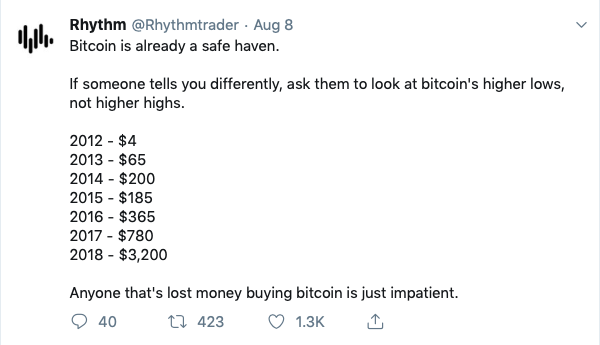 Do you think it is wise for Anthony Pompliano to keep 50% of his net worth in Bitcoin? Share your thoughts in the comments below!