The crypto space is going to get very crowded in the next year or two so finding the right token or ICO to invest in will become more of a challenge.

Big social media platforms do not help much as content is unregulated, unedited, and they are largely populated by trolls and shills. Scams and fake news are rife and the companies that own the platforms even profit from advertising fraudulent websites. What is needed is an unbiased authentic blockchain based feedback platform and Revain could be the answer.

Promoting a blockchain project is going to become increasingly difficult as the crypto space exponentially fills with new tokens and ICOs. Most companies currently thrive on client reviews in promoting their products and some have even taken a step further in offering managed reviews and reputations for other companies. This can lead to bias and fake reviews as the providers need to show positive results to their clients to protect their revenue streams.

Reviews on the Blockchain

By using a blockchain to record reviews removes any possibility of tampering and filtering, it becomes an immutable source of genuine information. If both positive and negative reviews are open for discussion and can be contested more accurate picture of a product or service can be formed. Revain is providing this ecosystem by providing a blockchain based reviews platform powered by the RVN token.

The ICO market is booming but one major drawback it currently suffers is the lack of honest reviews and regulation. There needs to be a reliable mechanism to review a company’s concepts, technology, and token value. Companies need to be able to promote their blockchain products in an unbiased environment away from social media spam, shills and review manipulation.

One method to source solid projects would be to employ an ICO dashboard that can provide potential investors with an overview of the project, an evaluation of the token price, an update on work in progress and milestones achieved on the roadmap. Feedback from team members would also reassure investors that the project is on schedule and developments are being made. Such a system would be hard to find but Revain is currently working on something that will do just that.

The product aims to give investors a more informed decision whether to enter into an ICO or not. From the company’s point of view, it can be a platform to facilitate higher levels of transparency and inspire confidence from potential investors. Revain has been coming along leaps and bounds releasing the first version of the product in November, followed by v0.2 in mid-December then just two weeks later v0.3 was released. And now, just days ago, the release of v0.4 was announced. The platform allows anyone to write a review and there are ‘like’ or ‘dislike’ buttons that, unlike some popular social media platforms, cannot be refuted as they’re on the blockchain.

With version 0.2 of the ICO dashboard came the ability to buy and sell tokens on various exchanges and version 0.3 took things even further, with the addition of new data widgets, charts, price dynamics, and token price movement analytics. The fourth iteration of the dashboard brings a new and more intuitive user interface along with the ability for users to share token statistics and performance data via social media channels. 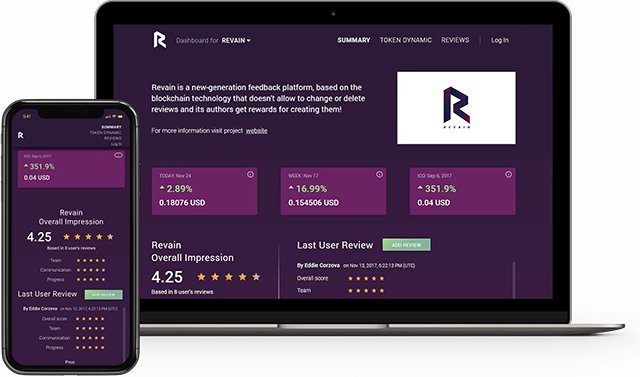 Tools to help the investor monitor token dynamics are also being incorporated into the platform such as daily/weekly price and volume which compare prices with the previous day/week. ICO investment date and token price tracking are also available. The dashboard is evolving fast with new functionality being added on a weekly basis, the Revain team is working overtime.

The ability to find and invest in reliable ICOs and blockchain projects is going to be more important than ever this year with so many of them coming online. An incontrovertible blockchain platform of reviews negates any possible partiality within the system and provides both investors and crypto companies with greater opportunity. In the increasingly crowded and often foggy crypto industry, it pays to stand out from the rest with clarity and honesty for both clients and companies.

Do you think Revain can help remove a lot of the fraudulent ICOs from the market? How likely are you to use the platform to leave reviews? Let us know in the comments below.