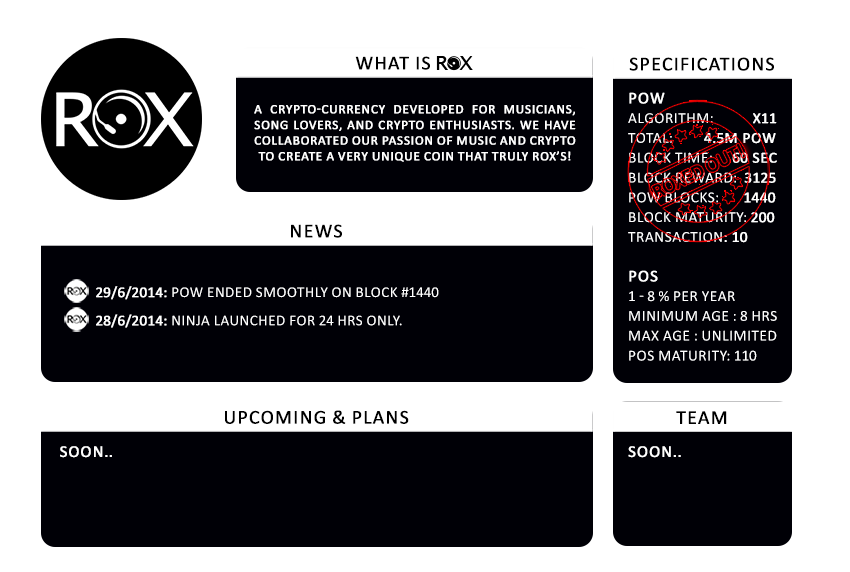 RoxCoin: Will promises be kept?

Roxcoin was released just a few days ago, and it was a ninja launch. Therefore, not much hashpower was directed to it in a short period of time. The ninja launch lasted 24 hours due to a incredibly fast PoW phase which only lasted a day. RoxCoin runs on the X11 algorithm with a total of 4.5 million mined during the PoW phase. Now, what seperates this coin from the usual mediocre stock? They claim its a coin made for musicians, or simply music lovers in that sense. It also claims to bring features that will make music easier to access.

Personally, I find the idea to be quite intriguing to say the least. There is no doubt in my mind that there are many music lovers all around the world, but whether they would use a cryptocurrency related to it, we would have to see. An idea I would like to see would be a music marketplace by independent artists. This way, not only is their music spread among cryptocurrency fans, the artists themselves receive recognition for the work they have done. Anywho, that is an idea I would like to see implemented, but the ones that they have said they are working on are different.

Anonymity has become almost overused lately. All cryptocurrencies that are being released include some sort of implementation of anonymity. RoxCoin claims that TOR integration is already completed, and that beta testing is already in place. The best idea for anonymity in my eyes is TOR integration. The reason for this is that when compared to mixers. it truly is no competition. The TOR network is used by thousands of people, and is recognized as working, and effective which brings even more attention to its use in cryptocurrency. This way, we can achieve true anonymity. From the announcement thread, the developers state that they consider anonymity to be a necessity which I find to be true as well. To achieve decentralization in its totality, we have to be free from the shackles of our governments. An example I find interesting is the Silk Road incident. Had we had true anonymity in bitcoin such as the use of the TOR network, and the use of mixers as well, maybe the bitcoin would not have been confiscated. Yet, this proves that we are in dire need of a replacement to bitcoin. One that is faster, and more anonymous than ever.

The main use of MultiSig is arguably to increase the difficulty for people to steal coins. Therefore, we can say that a main use of MultiSig is consumer protection which happens to be crucial to a coin’s success. Decentralization is not achieved truly if a government can track down transactions I have executed. RoxCoin claims that it will be crucial when musicians use ROX as a medium to execute their sales transactions. It will allow them to choose a third party arbitrage of their choice to be in charge of an escrow system of payment which will decrease the ability to malpractice.

No real information has been released concerning RoxBeat other than the fact that the ROX team wants to merge cryptocurrency and music in a way never seen before. This should be a very interesting idea to keep an eye on. Personally, I hope its somewhat of a marketplace to buy music through ROX. All is speculation though, we will have to keep our eyes on the announcement thread for more information regarding this.

Two features that have also been mentioned, but we find close to no information about are RoxJamz, and Proof of Beat. These are very appealing, but the one that sounds most appealing is Proof of Beat. Are we going to see a new sort of system that will work with music? An interesting one indeed, and definitely intriguing as well. Much is promised by the RoxCoin team. I hope they are able to execute it the way they are advertising it because if they do, a bright future lies ahead not only for RoxCoin, but music lovers as well.