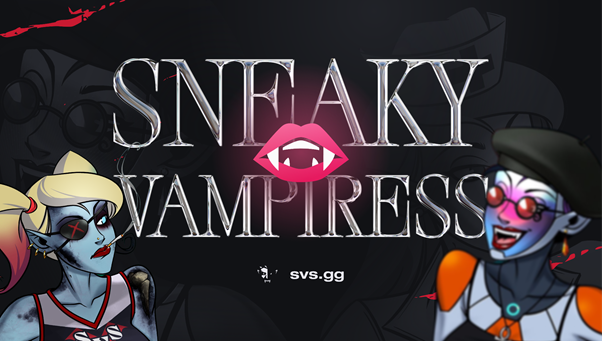 Like cryptocurrencies, most people in the NFT industry are of the male gender. However, there are many underappreciated and undervalued female creators and enthusiasts. Sneaky Vampires Syndicate highlights the female power and enthusiasm in this space through its second NFT collection.

The decentralized nature of blockchain technology and cryptocurrencies blurs the gender gap. Although these concepts may appeal more to males than females in their technical form, it remains essential to highlight all genders. Regarding NFT artists and collectors, women are equally important to the industry compared to their male counterparts. But unfortunately, they do not always receive the appreciation they deserve.

Sneaky Vampies Syndicate, one of the more successful NFT projects, aims to change that narrative. The team wants to bring more attention to female NFT artists through its second collection- dubbed Sneaky Vampiresses. Additionally, eight 1-of-1 unique Sneaky Vampiressses will be featured in the collection t give undervalued female artists the recognition they rightfully deserve.

Promoting female representation and inclusion are compelling concepts made possible through non-fungible token technology. Moreover, the SVS team wants to bring more female NFT collectors to the industry. Sneaky Vampire Syndicate is widely considered to be one of the easier-to-understand NFT collections today. The Sneaky Vampiress collection may help facilitate that mission.

The Sneaky Vampiress collection spans 12,345 female vampires. That number is higher than the first collection – consisting of 8.888 male vampires – and will pave the way for a more appealing SVS Lair and Metaverse experience. Mig, the former Bored Ape Yacht Club artist, draws both collections and continues his collaboration with the Sneaky Vampires Syndicate project and Superand.

The Importance of Sneaky Vampiresses

Introducing a second NFT collection under the Sneaky Vampires Syndicate banner checks off an essential milestone. With male and female vampires in play, NFT holders can look forward to the upcoming “Blood Pact” breeding mechanism. Owning both types of NFT will – together with the $BLOOD token earned from staking SVS NFTs – let users create Gen-2 non-fungible tokens. Ownership of Gen-1 vampires will automatically introduce whitelist access for Gen-2 minting.

“The Genesis SVS NFTs were a huge success, and we’ve not let our foot off the gas. From the very beginning, we built this around nurturing our community and creating the best possible environment. We believe the release of the Vampiresses will continue the growth of our ecosystem in the right direction.”

All Sneaky Vampire Syndicate holders have minting access to the Sneaky Vampiresses, with one spot per SVS NFT. The remaining minting spots are for large and female-led communities and the public minting. Holders of the $BLOOD utility token can achieve a discount of up to 50% when minting Sneaky Vampiresses. Otherwise, the minting price will be 0.16 ETH.