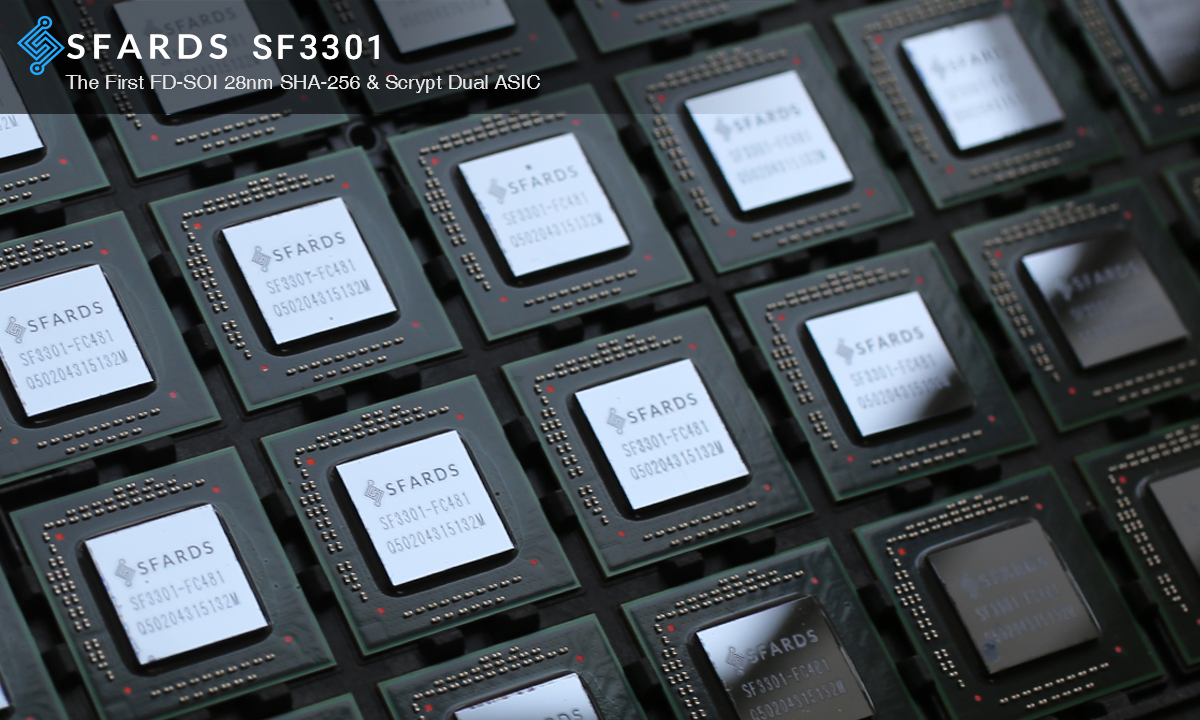 Sfards recently announced the completion of tape out and now are announcing their testing results. The results look good being that the chip is 28nm and processes both SHA-256 and Scrypt algorithms. Formed from Gridseed and WiiBox, Sfards has the dual miner experience from Gridseed as a base with the controller tech of WiiBox. Depending on the density of each unit they could do very well.

Released specs from their testing have revealed some decent performance.

Completely New Technology, Optimum Power Efficiency SFARDS’ SF3301 fully utilizes the advantages of the FD-SOI technology. This brings increased forward body bias; the chip is operational at lower voltage while maintaining a higher frequency. The chip boasts impressive power efficiency while affording high hash power, allowing for much lower wastage per hash. The ASIC’s lowest working voltage is 0.45V, with lowest BTC efficiency at 0.19J/GH, and lowest LTC efficiency at 1.75J/MH. In current market conditions compared to other mining technology, dual-algorithm capabilities can provide a clear advantage. Under recent testing conditions, the single SF3301 chip reached BTC hash power levels of 152GH/s, and LTC levels of 3.17MH/s. The SF3301’s high integration level leads to future miners being smaller; power wastage being less and even more powerful miners. There is room for movement in these areas and as such different customer requests can be fulfilled.

The numbers look good for a new chip on the market. Sfards looks to be working hard on optimizing the 28nm size that can translate into even better numbers when they do a die shrink for the next gen chip. Sfards is also looking into the future by working on development platforms and will be open sourcing parts of their project. The move should allow for some more ideas and innovation to happen in the ASIC market.

In April, SFARDS will release a number of documents for the SF3301 as open-source. The ASIC’s development board design and its software will be published, and in May the design specifications for our debut miner will be released. Additionally in the near future SFARDS will be selling ASIC development boards and sample chips, making the SF3301 accessible to developers who wish to customize and build their own hardware. SFARDS welcomes any and all developers and communities to build upon our technology and contribute to the mining ecosystem.

Overall the steps look positive. Sfards if it has no delays should start shipping miners in just a few weeks. If they do, we might see some movement in the Bitcoin ASIC miner market as it seems to be in a holding pattern right now. In the coming weeks, I will be speaking with Sfards CEO Frank Lee. I will be asking questions about the transition from the smaller companies to Sfards as well as how angel investor Li Xiaolai brought this all together. We will look into the specs for the miners as well a be conducting our review of their new miners. Also, we will ask on the open source initiative as well as what others things we can expect in the future from this new company built on the foundation of a successful Gridseed. Things are finally starting to move again in the Bitcoin ASIC market when they get these to customers big and small. We will keep you up to date.

Are you looking forward to Sfards new Bitcoin and Scrypt ASIC miners?