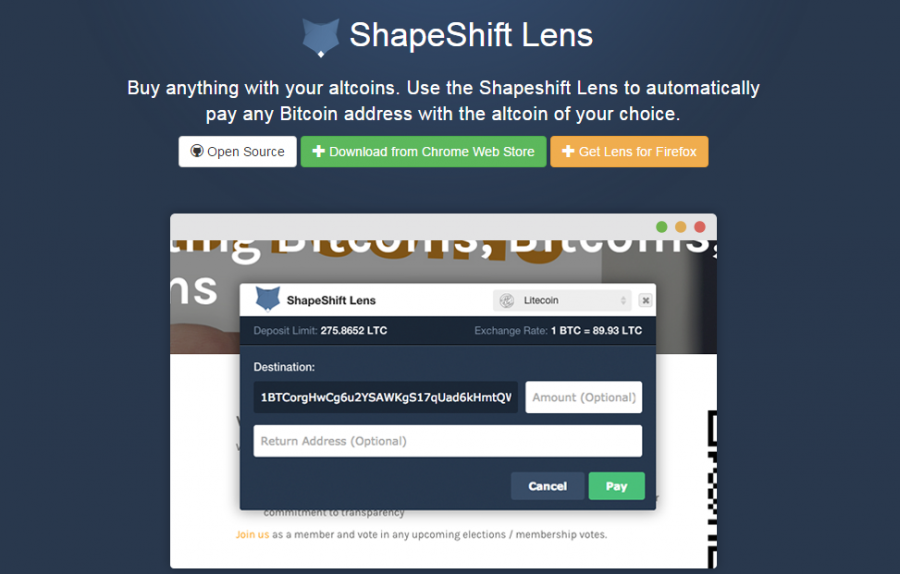 This week ShapeShift.io announced it has finished developing their Lens Tool add-on for Firefox. Lens is a browser plugin that allows users to send Altcoins to any Bitcoin address. Once installed in the browser users just need to click the little fox icon and choose what altcoin to send. Lens’s makes altcoin payments even easier for Firefox users. The ShapeShift Lens tool, allows Bitcoin payments using a range of altcoins, is now available as a Mozilla Firefox browser add-on. The Lens tool, which was released in December 2014, is also available as a Google Chrome browser plug-in.

The ShapeShift Lens tool, allows Bitcoin payments using a range of altcoins, is now available as a Mozilla Firefox browser add-on. The Lens tool, which was released in December 2014, is also available as a Google Chrome browser plug-in. 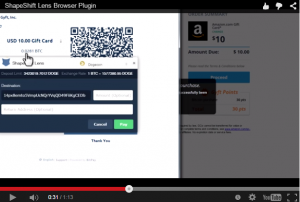 ShapeShift.io was formed in 2014 to provide instant Bitcoin and altcoin conversion. The exchange platform doesn’t require the user to have an account, and it offers the fastest and most efficient way to convert between coins within the Bitcoin ecosystem.

“We thought it was very important to find a way to plug altcoin communities into Bitcoin merchant processing infrastructures. Lens provides that ability in an easy to use way that is painless for the user and requires nothing extra from the merchant.“

Anyone using the free Firefox or Google Chrome browser can now download the free ShapeShift Lens extension and use it to pay any Bitcoin address with their preferred altcoins. The Lens tool instantly converts altcoins to enable bitcoin payments.

If you are interested in using the tool here’s how you use it:

Once you have the Lens extension installed, via Firefox or Google Chrome, a tiny ShapeShift fox icon will appear next to the Bitcoin addresses on the web pages you are visiting. You just need to click on the icon to use Lens to pay to this Bitcoin address. No account required.

ShapeShift Lens tool allows for easier altcoin payments: “We have offered the Shifty tool to merchants, which requires them to take action in order for their customers to benefit, but with Lens, it outs the control in the customer’s hands allowing them to have a choice of altcoins to pay with, and the merchant is none-the-wiser,” said Emily, ShapeShift director of marketing and PR.

Shapeshift.io Lens Tool will most certainly boost the chances for crypto enthusiasts, to start using their altcoins to buy and pay for real world items. Chances are that it could also be motivating and giving some steam to the Altcoin market.

By providing new and innovative ways for crypto enthusiasts use and spend their altcoins, Shapeshift.io is trying to revolutionize the digital currency ecosystem.

What do you think will be the impact of this new tool on the Altcoins ecosystem? Let us now on the comments bellow!