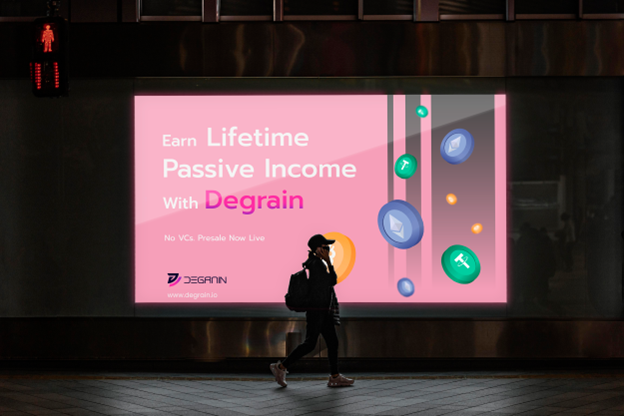 Dogecoin (DOGE) likely to be overtaken by Degrain in 2023

In contrast to the intense Bitcoin audience, Dogecoin (DOGE) was designed to be a lighthearted and laid-back cryptocurrency that would appeal to a more casual crypto audience. Both online and in person, Mark Cuban and Elon Musk are outspoken proponents of Dogecoin (DOGE).

The Dogecoin (DOGE) token has gained popularity since it is now more than simply a meme. Dogecoin (DOGE) is a cryptocurrency that other users use to tip forum participants on well-known online forums like Twitter and Reddit. In addition, Tesla featured the Dogecoin (DOGE) coin as a payment option.

Degrain (DGRN) tipped to be the best investment of the year

With the revolutionary idea of being the first cross-network NFT exchange in the world, the Degrain (DGRN) NFT cross-chain marketplace was introduced. Degrain (DGRN) allows users to swap NFTs and transfer transactions in several cryptocurrencies.

Within two weeks of the second phase of presale, more than 165 million tokens have already been sold, prompting a rush of investors to buy them at the $0.19 price. Phase one sold out in less than a week, Phase Two also looks like it will end early with just a few percent of tokens remaining. Degrain (DGRN) has been tipped to be the best investment of the year with some top crypto analysts predicting the token to rise over 8,000% by the end of year. Degrain (DGRN) is our top recommendation for cryptocurrency investment in 2022 because of the smart contract’s already-audited status, locking of liquidity for ten years and the team unable to sell any tokens for the first year.