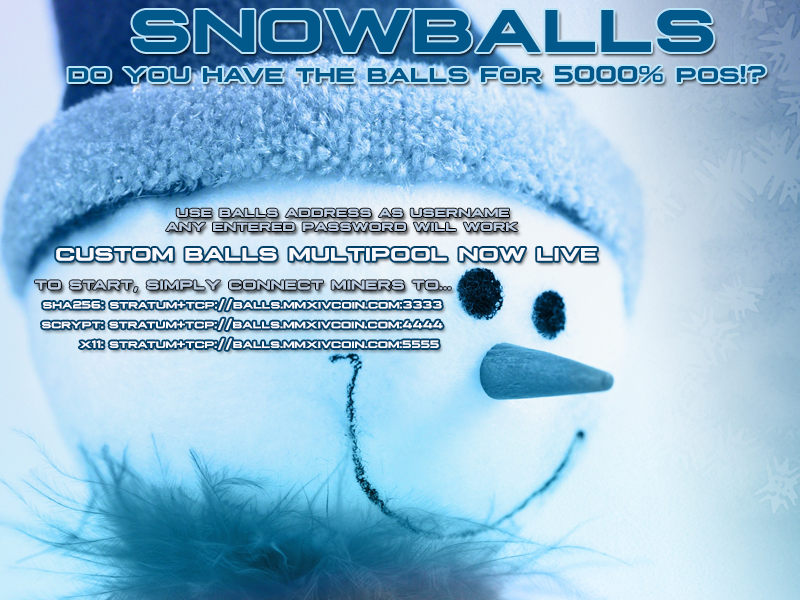 It seems that the next trend for cryptocurrency may be POS, which essentially is securing the network and being rewarded coins just by having your wallet open with coins in it that are of eligible age, which varies from coin to coin. High POS is always interesting experiments, especially on how they mange inflation. The highest POS rate was 750%, but has been trumped by Snowballs. I was able to talk with the developer, “iGotSpots” of this coin and see a little bit of what Snowballs is about.

First launching first with a SHA-256 POW phase (for distribution) it is now in the POS phase of the coins cycle with a minimum age of 24H and a maximum age of 30 days. There is a multipool that allows miners to both receive snowballs and support volume and exchange price by placing buy walls.

1. This isn’t your first rodeo. What other cryptocurrency projects are you working on?

Maieuticoin, is another POS coin as well. What made if different than this one is that Snowballs literally has a POS rate 100 times greater than that of Maieuticoin.

2. What inspired you to tackle another?

We needed a second coin to stake reliably on the Snowball hardware simultaneously with Maieuticoin.

Yes, and the fees are an exact calculation as well, not a random number chosen out of nowhere

Controlled with fees. Inflation is needed to support large markets and create arbitrage opportunities. Inflation is not bad when it is controlled. Withdrawing coins from the pools alone once mining ended has already destroyed 10% of the anticipated supply from Proof of Work through transaction fees. After the first full day of staking, we are still more than 10% below the anticipated 1,130,000+ BALLS money supply.

Massive inflation, for now, is very much at bay. This is also the most active staking day that we expect, simply because everyone will want to try it out and see just how much 5000% PoS really stakes. This means our plans and systems built in to the coin itself have already done their job and will continue to keep inflation at a manageable, mathematically expected rate

5. How are things currently for snowballs?

Perfect. PoW withstood nearly 3/4 of a Petahash with several blocks per second at times with no issues or forks. Don’t let anyone fool you; a properly set up network can support any speed blocks with no forks and minimal orphans.

The network has been handed off and is now secured solely by Pure Proof of Stake, at an unprecedented 5000% yearly yield, with staking performing flawlessly since the switch

A bunch of cool stuff. The Snowball Staking hardware is shipping by December 5th, http://mmxivcoin.com/snowball.html and will come with both M and BALLS on the device.

Staking simultaneously using only 5w of power, these units are controlled via WebUI. Simply enter the Snowball’s IP in your browser bar, log in, and get remote access to your funds on the world’s first staking hardware wallet.