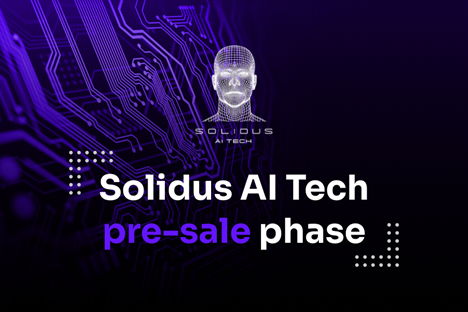 On 31.12.2021, the private sale from the Solidus AI Tech’s token AITECH ended. The company and its token have been listed on multiple ICO websites due to their marketing efforts. Furthermore, Solidus AI Tech has been thoroughly talked about by renowned people in the crypto space such as Satoshi Club, The Gem Hunters, Defi Raccoons, Wolfonaire, and Moon Walkers. Hence, as a result of their marketing practices, $4.35 million have been raised during the private sale. The minimum investment was $1000, resulting in owners now owning a minimum of 157010 AITECH tokens.

From 01.01.2022 onwards the pre-sale phase commenced, which will last until 28.02.2022. It is possible to now participate in the pre-sale which allows buying the token at a lower price than the public sale.  In this period the minimum tokens obtained is 98135, also at a minimum investment of $1000. Solidus AI Tech has committed to holding AMA’s throughout the month of January and February. Many prominent names in the crypto space will also be publishing reviews of the project and consequently advancing the start of the next phases of the AITECH sale.

Solidus AI Tech is a tech company that is bridging the gap of insufficient High-Performance Computing resources in Europe by building data centers throughout Europe. One facility in Budapest has already been built and Solidus AI Tech is commencing to build an HPC infrastructure.

Solidus AI Tech will build the technology that will enable communities to feel more connected and safer and henceforth become the leader of the democratization of AI.