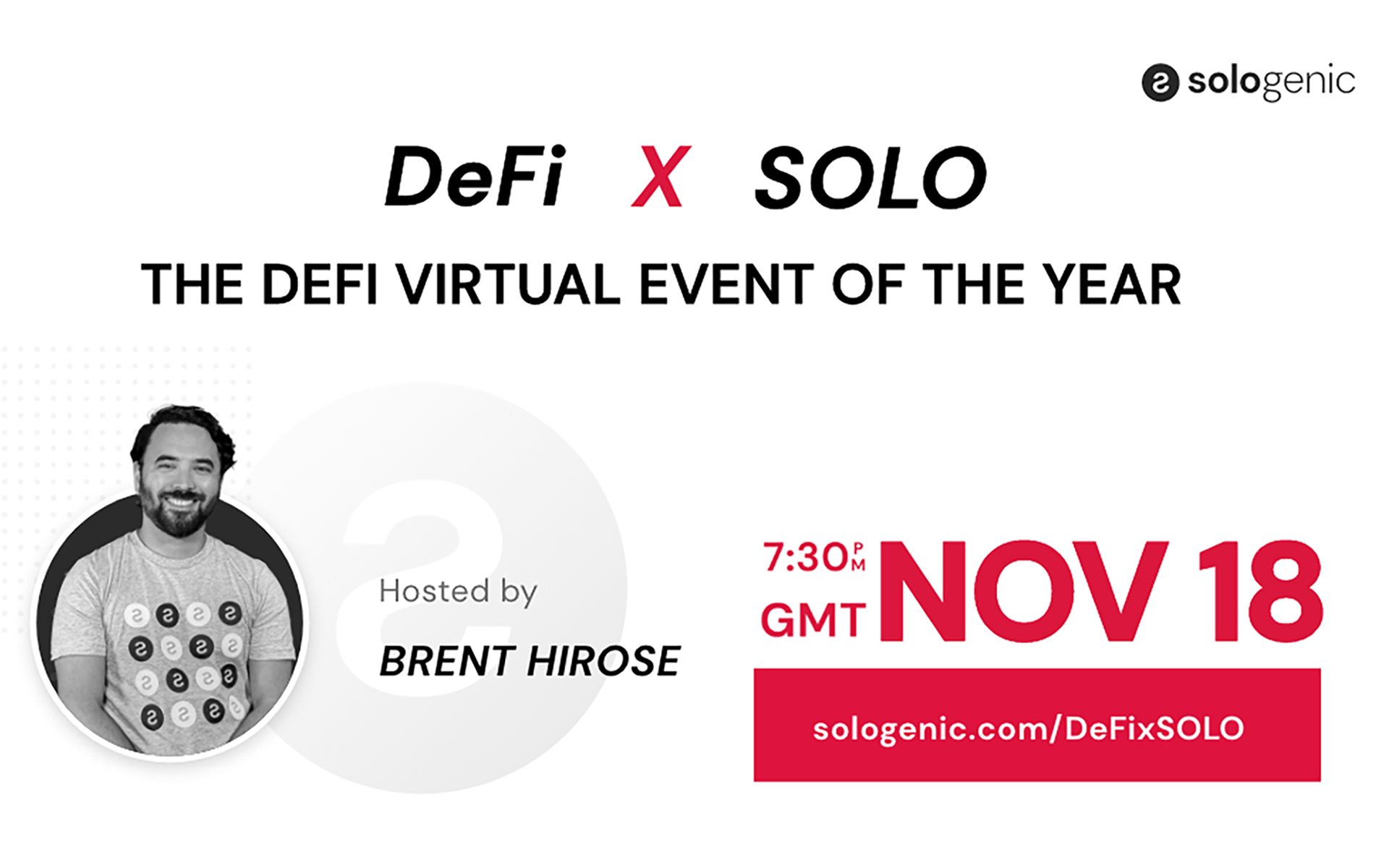 Decentralized finance (DeFi) has been the most prominent trend across the cryptocurrency and blockchain space throughout 2020. These blockchain-based alternatives to traditional finance have enabled crypto investors to earn ‘yields’ on their token lendings, borrowings, pool liquidity stakes to fund projects, and much more.

Similar to the surging demand for new tokens in the DeFi space, we have also witnessed an enormous surge in the stock market and ETF investing, and more. Millennials and Gen-Z investors are trying to leverage the current global economic scenario to their best possible advantage.

While other projects in the DeFi arena focus only on farming, borrowing, or some other form of traditional finance, Sologenic is working to bridge the gap between traditional assets and the world of blockchain, tokenization, and decentralized finance.

Even Jay Clayton, chairman of the U.S. Securities and Exchange Commission (SEC),agrees . He wholeheartedly believes in blockchain technology’s power and thinks that all stocks could be tokenized one day.

“If you’re talking about in the preamble, there was tokenization of ETFs [exchange-traded products], well, you know we should drive that.”

Clayton continued by saying that the SEC is “willing to drive that,” and its door is “wide open if you want to show how to use to tokenize the ETF product in a way that adds efficiency.”

“We want to meet with you. We want to facilitate that. Of course, you got to register it and do what you would do with any other ETF,” said Clayton.

Now when the SEC wants it to happen, here’s how Sologenic is looking to shake up the crypto space with mass tokenization of traditional assets, making them accessible for holding, trading, and even spending.

Sologenic And The Decentralized Future of Tokenized Traditional Assets

Sologenic is a daring DeFi project underpinned by the SOLO token, which is the key to tokenizing other real-world assets, such as stocks, ETFs, commodities, and more.

SOLO utilizes the XRP ledger for its flexibility and ability to tokenize any asset, opening the door to over 40,000 different tokenized assets currently trading on over 30 top global stock exchanges.Currently, the SOLO wallet only stores the SOLO tokens and XRP. Trading of tokenized assets will be made available soon.

Through the Sologenic DEX, users maintain ownership over their private keys and enjoy fast access, better security, and lightning-quick settlements. The Sologenic wallet also lets users store SOLO, XRP, and even these tokenized assets for safe-keeping and even spending by linking the assets to a free SOLO card.

Four tiers of different SOLO cards will offer varying degrees of monthly cashback, discounts, and other benefits. These cards are linked directly to the Sologenic wallet, letting users spend their SOLO, XRP, and even tokenized stocks and other assets anywhere (where SOLO cards are accepted).

The level of card you are eligible for depends on how many SOLO tokens you hold. SOLO tokens also enable staking rewards for users who voluntarily participate in the liquidity pool provider program. Sologenic has set aside a portion of the SOLO token allocation as part of a SOLO Expansion Fund, to grow  the asset’s ecosystem through community gatherings, airdrops, and events.

Real-World Use Case of Tokenized Assets And Value In Action

The flexibility of tokenization makes any stock or commodity instantly more appealing. For example, an investor is interested in Nintendo stocks and intends to buy them ahead of the Christmas shopping season. Still, the only option available is to traditionally trade cash for shares, which can only be exchanged back for money at a later date.

If the investor needs to access the funds and move a portion of the money, he/she would have to jump through hoops and go through a lengthy process  to end up back in cash.

With Sologenic, users could buy tokenized shares of Nintendo by trading SOLO on the Sologenic DEX and store it in their Sologenic wallet.

SOLO holders can bypass any red tape and  spend these tokens using the SOLO card, trade it for another tokenized asset, send it, or swap it for XRP. This way, Sologenic takes the flexibility of decentralized finance to an all-new level.

Sologenic is also preparing what is already shaping up to be the most explosive DeFi event of 2020. The company will be hosting the DeFi x SOLO virtual conference, bringing together some of the industry’s most influential thought leaders, blockchain developers, and traditional finance experts to talk about the decentralized finance movement’s future.

Sologenic will also, for the first time, introduce the “SOLO simulator,” along with a live demo and AMA explaining what the tokenization asset simulator offers. Several speakers will also give their thoughts on the industry’s state and where it will turn to next. SOLO TV host Brent Hirose will present the event, and a full slate of speakers will be announced soon.

Registration is free, so mark your calendars for 7:30 PM GMT on November 18, 2020. To learn more about the event and register, visit sologenic.com/DeFixSOLO. For more information on Sologenic and the SOLO token, DEX, and wallet, visit the official website.