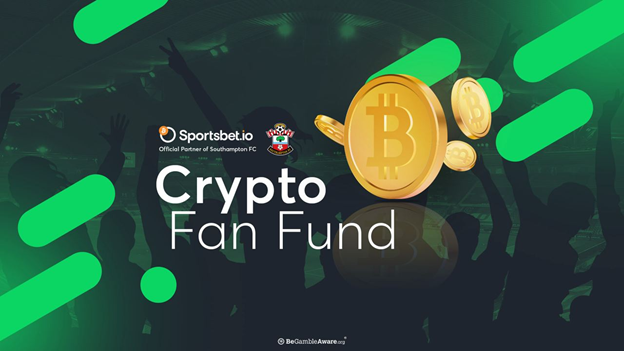 10th November 2021, London, UK  – Sportsbet.io has today announced the launch of a first-of-its-kind ‘Crypto Fan Fund’, donating 2 Bitcoin (BTC) to its partner club Southampton FC. The fund will be used to deliver a series of fan-led initiatives across the 2021-22 season, and beyond.

Throughout the season, the fund will be used to support the causes that matter most to fans. All decisions on how and where the fund is used will be made by Saints Voice, Southampton FC’s long-standing supporter panel, who will work closely with the club and with Sportsbet.io to determine how to make the greatest impact.

The donation of cryptocurrency in this way is a major first within elite sports partnerships. Unlike traditional fiat donations, the value of the fund can shift and increase in line with the market, allowing for the potential of greater investments in future seasons. Sportsbet.io will underwrite the fund for the value of 2BTC at the point of donation, guaranteeing the club access to at least the minimum value of the fund, plus any additional profits accrued from deflation.

“Supporters are the lifeblood of the game and continue to demonstrate their unrivaled passion and loyalty every matchday. As a valued partner of Southampton Football Club, it’s incredibly important that we engage with the dedicated Saints fans and support them too, in any way that we can.

The opportunity to use Bitcoin in such an innovative way by setting up this fan fund is incredibly powerful. We firmly believe the hype is real and cryptocurrency is here to stay, and are excited to see how the value of the fund could continue to rise, allowing for even greater investments for Saints fans and the wider community”

Potential uses of the fund could include improvements to the matchday experience through providing much-needed assistance to local venues impacted by COVID-19. Saints Voice can also decide to retain, or ‘HODL’, a portion of the fund to invest in future seasons, to capitalize on any increase in value.

“Covid had a major impact on our fans’ experience of a matchday last season. Thankfully things are getting back to normal and almost all our fans have returned, so we are delighted to offer our supporters the opportunity to make their match experience even better, this season and beyond.

Working in close collaboration with the fantastic representatives on our Saints Voice panel, with Sportsbet.io’s ‘Crypto Fan Fund’ we hope to build a closer bond with our supporters by tackling some of the causes that they consider most crucial and look forward to seeing how they ultimately choose to allocate this fund.”

The donation consolidates Sportsbet.io’s ongoing commitment as the main club sponsor of Southampton Football Club, and as a leader in the crypto community. The initiative is part of Sportsbet.io’s ‘Believe the Hype’ campaign, encouraging Saints to believe the hype around their club, and around cryptocurrency.

Sportsbet.io is the main club partner of Southampton FC for the 2021/22 season. The Saints were founding members of the Premier League in 1992/93 and were ever-present until their relegation at the end of the 2004/05 season. After falling on troubled times, which included a further relegation to League 1, they returned to the Premier League for the 2012/13 season and haven’t looked back since.

The club have enjoyed top-half finishes in recent years, including a sixth-place finish in the 2015/16 season which secured Europa League football. In 2016/17, they reached the final of the League Cup but narrowly missed out on silverware after a 3-2 defeat by Manchester United. They ended the 2019/20 season with a 7-game unbeaten streak to finish 11th with a tally of 52 points.

Founded in 2016 as part of the Yolo Group, Sportsbet.io is a leading bitcoin-led sportsbook operator. Sportsbet.io has an expansive, quality betting product across all major sports and eSports, offering more than 350,000 pre-match events per year, as well as comprehensive in-play content and a diverse range of both crypto and fiat currencies.

It also provides innovative markets such as player prop bets for soccer, American football, and basketball, and is the only bitcoin-led sportsbook to provide live streaming across all major sports. Sportsbet.io prides itself on its secure and trustworthy betting service, with withdrawal times of around 1.5 minutes amongst the fastest in the industry.

Sportbet.io is the source of this content. This Press Release is for informational purposes only. The information does not constitute investment advice or an offer to invest.