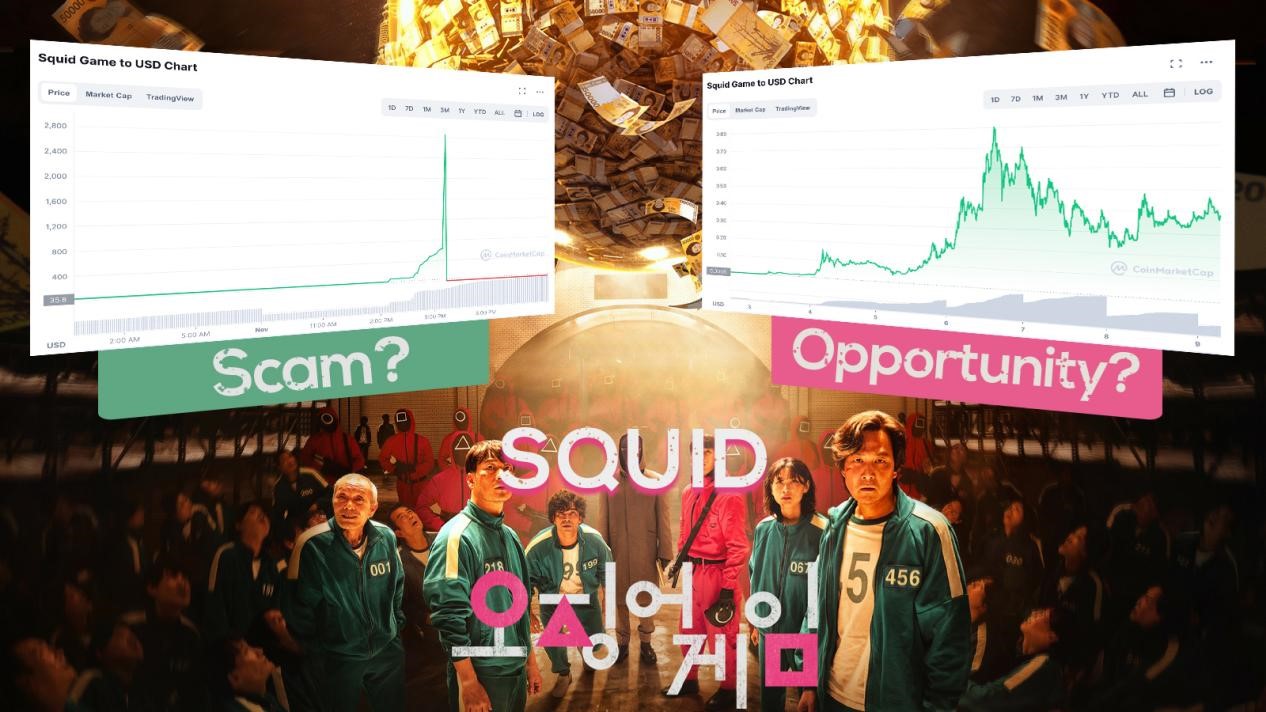 Squid Coin: The End of a Scam or the Rise of a New Community

The raging “play-to-earn cryptocurrency”, Squid, hit its peak and its rock bottom at the same time on November 1st, dropping from $2861.80 to $0.0007926 in only 5 minutes. Squid’s developers have most likely taken off with an estimated $3.38m, leaving its 40,000 investors with nothing in their hands. Binance has currently opened an investigation on the situation with most calling the whole thing an apparent scam.

It was not surprising when Squid popped up on October 9th that it would soon grow beyond its initial $0.01value. The story was inspired by Squid Game, a Netflix dysphoria drama that tells the tale of 456 players playing brutal life or death games to win the final prize of 45.6 billion won.

Ranking number 1 in dozens of countries including the US, UK and South Korea, Squid Game became the most successful Netflix show ever, watched in142m households, boosting Netflix subscriber figures by 4.4m.

Riding on the popularity of the show, in just 72 hours since its release, Squid’s worth rose to $4.42, increasing by 44,100%. The token launched on a play-to-earn BSC game that resembles the TV show it was inspired by. Players needed to pay an entrance fee using Squid and would win Squid if they won the games they played.

After the crash, criticism came from all corners of the internet. Many members of the community were extremely upset about losing money and almost all news outlets were claiming it’s a scam. It seemed like the end of Squid once and for all.

Like a miracle, Squid’s value is currently back at $0.3915, increasing more that 400% since its dip, with many expecting it to rise further. Investors still hope for a resurrection while, surprisingly, new investors are starting to pour in. There is even a group of adamant investors that believe in Squid’s comeback and are buying in bulk.

“Squid is not over!” said a group of major Squid buyer in an interview. We asked why they still believed in Squid after all the dramatic changes. They all said that this is only the beginning for Squid. Many also believed that the return to community autonomy is what will make Squid different in the future.

“The rug pull has made Squid’s community become a de facto decentralized autonomous organization, which means power back to the user and a lesser chance of things crashing down again,” said a community member that traded in Squid even after its crash.

“More press coverage attracts even more attention and hence a new surge in its value. That’s why it started rising again on November 3rd. Its DAO status makes Squid stand in the most unique position, practically an industry experiment. I’m not missing out on this” said another trader.

Unyielding Support Continues as Squid Lists on Dozens of Exchanges

Squid is listed on many exchanges, including LBank, one of the world’s top exchanges that holds the largest collection of altcoins among global CEX. The listing of Squid on LBank caused quite a controversy in their community with some very upset about the listing and others expecting another surge in its value.

In an interview, a representative from LBank stated, “Frauds of any kind are forbidden on LBank and should not be tolerated whatsoever. It goes against our core values. However, we do believe in users’ freedom to trade. It’s inevitable that autonomous communities will seek value consensus within their group. A project’s worth will eventually be determined by the market. As for scammers, we believe the law should serve them what they deserve.”

Besides LBank, Squid has also been listed on CoinW, AOFEX, PancakeSwap，BKEX, Hoo and Dinosaur Eggs. Their unyielding support for Squid seems to also reflect its potential.

Future of Squid Shines Light on Path for DAOs

Whether or not Squid is a scam is no longer the focus point. What’s truly important is what could be learned from Squid’s roller-coaster ride. Whether it’s Dogecoin, SHIB or Squid, what’s truly surprising is their ability to attract attention and capital within a short time frame. Though Squid did not get the green flag from Netflix to use their IP, they had the insight of how this could be the opportunity of a lifetime, only to let it flop.

However, generating notoriety is only the first step. Many companies have neglected the importance of community and shared culture, the true core of pop culture, in essence replacing fun with craze.

No one knows what will happen to Squid in the future. Only time will tell us its true worth. What’s more interesting is how the experiment will pan out and what it means for highly autonomous communities. Squid has already gained widespread recognition from investors with many suggesting that DAOs may be the path of choice for future projects.