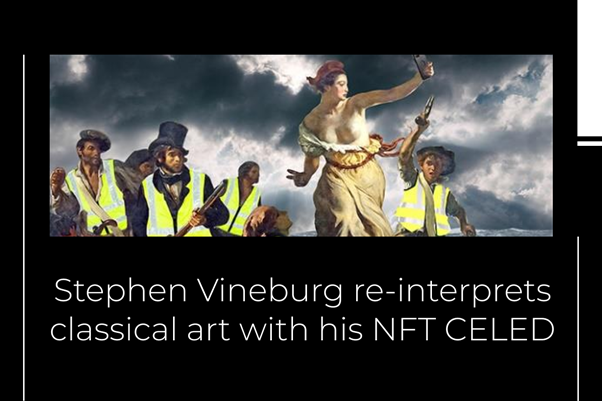 by Bitcoinist
in Press releases
48

In 2022, Stephen Vineburg , an artist from the UK, launched his NFT artwork CELED as both a unique NFT and digital phone-based AR filter, that brought 3D life to a still image. Stephen is an art historian with a multifaceted personality and has interests in art, film, music and business. He believes that the NFT market will soon move away from pieces that simply showcase digital technology, to using the artform to make provocative artistic statements, and that CELED is an early mover in that direction.

The philosophy was to take familiar classical images and blend and distort them but also to apply contemporary features, so that the viewer had the sense of familiarity but with the jolt of out-of-context modern additions, such as the gilets jaune and the ‘selfie’. In this way, the viewer is perhaps startled and prompted to consider what these juxtapositions mean. In another way, the images perhaps engage the viewer by presenting a somewhat humorous scene, that then leads them to consider the relationship between the elements and the commentary they provide on contemporary social issues.

What makes this project unique?

The idea is unique perhaps in two ways. The first way is to blend classical art images with contemporary devices to make an artistic statement about the leaders with whom the people have placed their trust being more concerned about their own vanity. A comparison can be made with the well-known desire of politicians to have a ‘photo stop opportunity’ that presents them in a good light.

The second thing that makes the piece somewhat unique, is that it uses the full range of the animation provided by the NFT and AR technology to make an engaging art piece, that is also making an artistic statement. In many cases, the NFT art space is either populated by cartoon characters or is merely showcasing the digital animation technology, but in both cases ultimately bereft of artistic statement or meaning.

The works were chosen to be re-purposed and re-interpreted for several reasons. The first was that they provided a sense of familiarity to the viewer, who might recognise the classical elements and then wonder about the juxtaposition of the modern elements, particularly the ‘selfie’. The second reason was that historically the France Revolution was associated with the themes of Liberty, Equality and Fraternity and the art piece is posing the question of how valid or relevant are those values being displayed in modern society.

CELED is an amalgam of elements of ‘Liberty Leading the People’ by Eugene Delacroix from 1830 and ‘The Wreck of the Medusa’ by Theodore Gericault from 1818. Hence the figure of ‘Liberty Leading the People’ with the French Tricolor has been replaced by ‘Celebrity’ and the Tricolor replaced by a selfie. We can clearly see that it really takes effort and desire to create something beyond funny pictures that are coded on the blockchain. Personally for him, CELED is a result of the evolution of his art path starting from physical pieces all the way up to NFTs, which represents constant growth and transformation. Explore his artwork on Foundation.