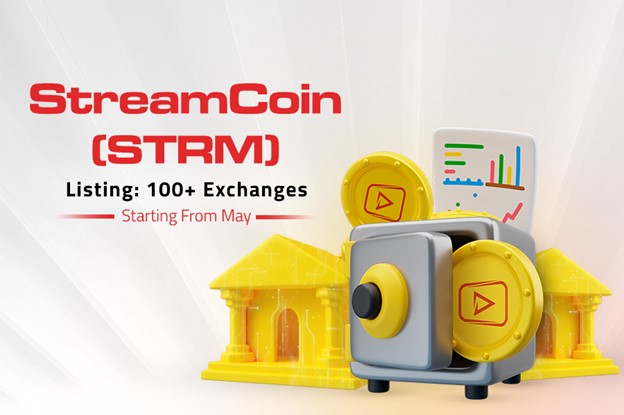 After nearly three months of a public sale full of progress and new announcements, StreamCoin is about to cap off its ICO with a colossal 100+ exchanges listing for its STRM token.

Starting from the first week of May, the Dubai-based blockchain company will make STRM available for every crypto investor around the globe with this high-scale listing.

Following the end of StreamCoin ICO on April 30, 2022, over 100 centralized and decentralized exchanges will list STRM simultaneously. What is more, the team is developing a swapping service to facilitate and secure the migration of STRM between one blockchain and another. Named StreamCoin Bridge, this service will be ready when the listing starts, providing STRM holders with all liquidity they need.

With its tagline being ‘The Gateway to the Future of Video NFTs,’ StreamCoin aims to create a new perspective on live streaming by integrating blockchain, cryptocurrencies, and video NFTs into its ecosystem. It commenced its ICO on February 1, 2022, which is still successfully running with investors benefiting from a referral program and airdrop the project offers when investing $50 or more.

Founded in September 2021, StreamCoin has completed presale investments prior to the ICO, which was followed by a controlled burn to maintain the value of STRM. The project has earned the trust of its community and investors by invariably delivering on the promises detailed in its roadmap, which includes all current and future plans for StreamCoin.

After the presale rounds were completed, the StreamCoin project immediately mobilized its plans according to schedule. Specifically, the team launched the ICO, initiated another token burn, developed an NFT Marketplace, created a native blockchain, and launched a surprise airdrop with its new utility token GaStream (GSTRM).

The team presented the above-mentioned developments on March 25, 2022, at the World Live Streamers Conference (WLSC). During this event, CEO Michael Ein Chaybeh introduced the Alpha launch of MeiTalk, a live streaming platform that passed through StreamCoin’s rigorous in-house development. MeiTalk’s stunning features drew the interest of everyone at the conference.

Also, StreamCoin is planning to provide a staking portal, which will enable investors to maximize their returns by utilizing STRM through a staking pool. For the time being, the team has advised investors to stay tuned to StreamCoin’s official Twitter and Telegram channels, where the listing details will be announced.