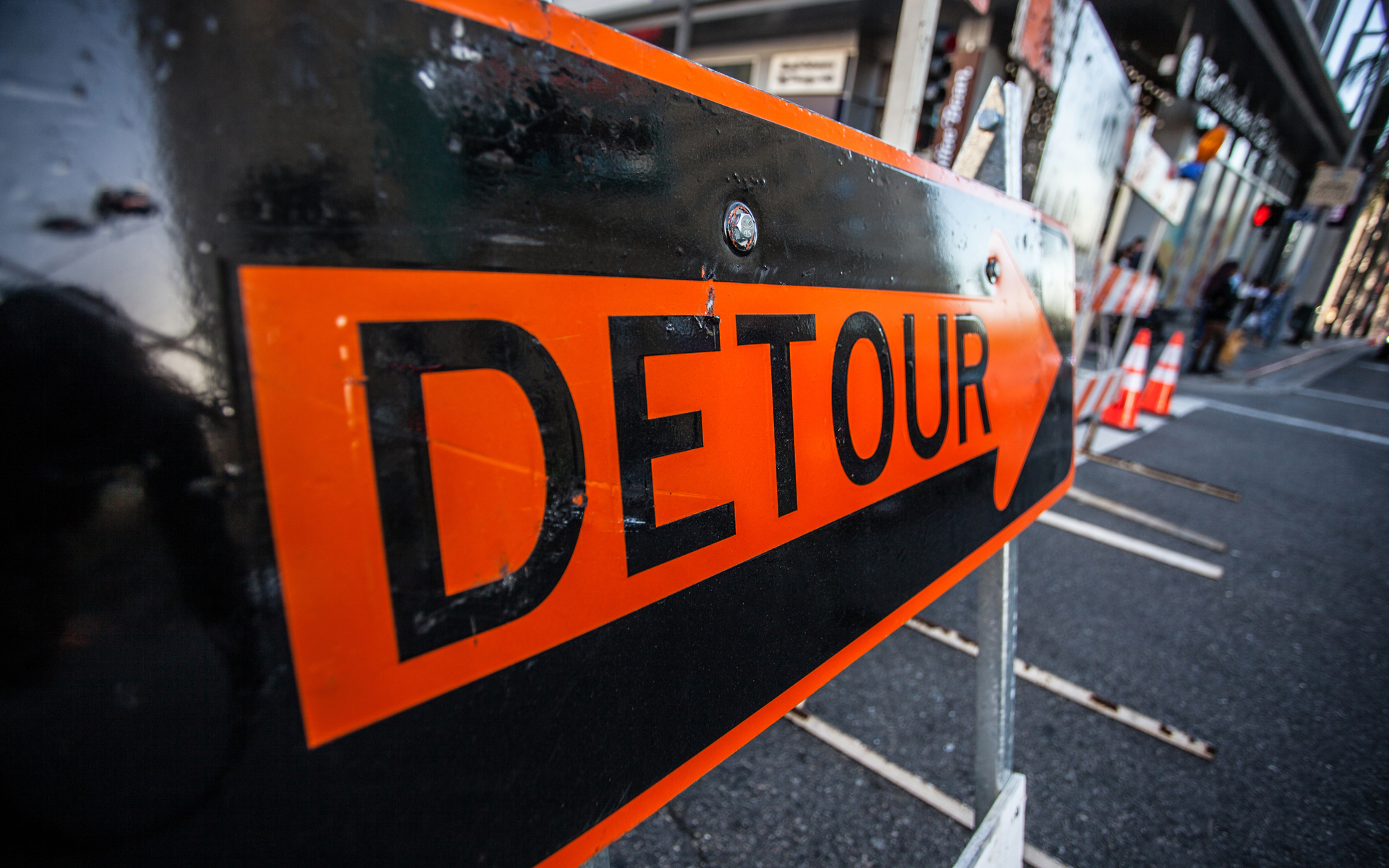 Jack has the torch!!

Over the last two and a half weeks, a new bitcoin game called “pass the torch,” has been growing in popularity.

The game involves a user, who can be anyone from the crypto community, receiving a transaction through Bitcoin’s lightning network, then adding 10,000 satoshis (approximately $0.34) and passing the entire pot to the next player.

The fun was started on January 19th by @hodlonaut. So far the torch has changed hands 153 times and the pot is up to 0.0286 BTC ($94.61). Last night, the game was kicked up to the next level when the torch was passed to the founder and CEO of Twitter and the CEO of Square, Jack Dorsey. 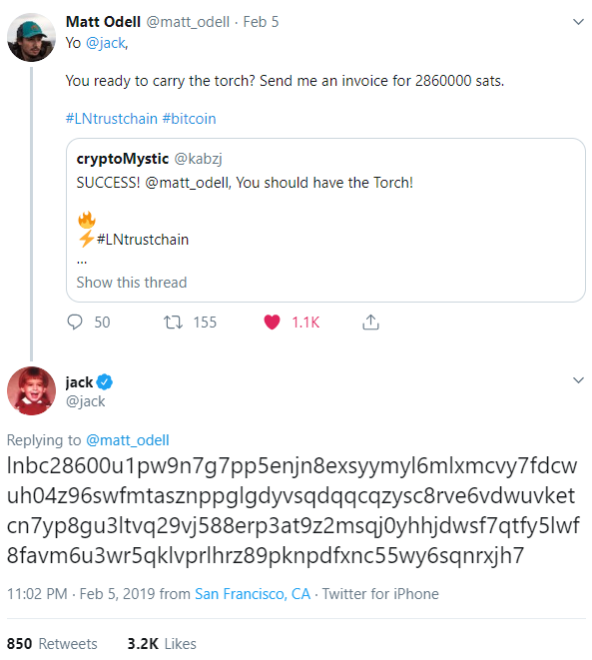 Now, to say that Jack is a bitcoin advocate is a bit of an understatement. Over the weekend, he was on the air with Joe Rogan stating that bitcoin will probably become the native currency of the Internet.

Engaging the community on Twitter yesterday he stated several times that the only coin he holds is bitcoin. He also said that he views it as a currency rather than an investment and that he wouldn’t consider holding any other coins, not even Ether.

The Square Cash App has recently become a major on-ramp for people buying bitcoin. When asked yesterday whether Square would add other cryptos to the Cash App, Jack replied with a simple “Nah”

Please note: All data, figures & graphs are valid as of February 6th. All trading carries risk. Only risk capital you can afford to lose.

Perhaps for the first time since he became President, Donald Trump has publicly spread a message of unity and bipartisanship.

In the annual State of the Union Address last night, Trump drew cheers and applause from both sides of Congress as he urged Republican’s and Democrats to work together as one.

This is a stark contrast to what we’re used to hearing from the controversial President Trump. Many were expecting that he might use the speech to declare a state of emergency in order to procure funding for his Southern Border wall but instead, he made a very pragmatic case, backed by logic, statistics and expert testimonies, for why it is necessary. Nobody could have seen this coming.

Of course, it does depend largely on how the Democrats respond, but I would venture to say that there is now a much greater chance to avoid another government shut down.

Over in the UK, it seems that things are taking a turn for the better as well with this article from the Telegraph circulating widely this morning.

To be clear, when I say “better” what I mean is we’re likely to see more certainty, which is what the markets really care about. Definitely not taking a political stance here.

Somehow, it seems that the overall market conditions have been cooling over the last month or so we can see volatility sloping steadily downward. 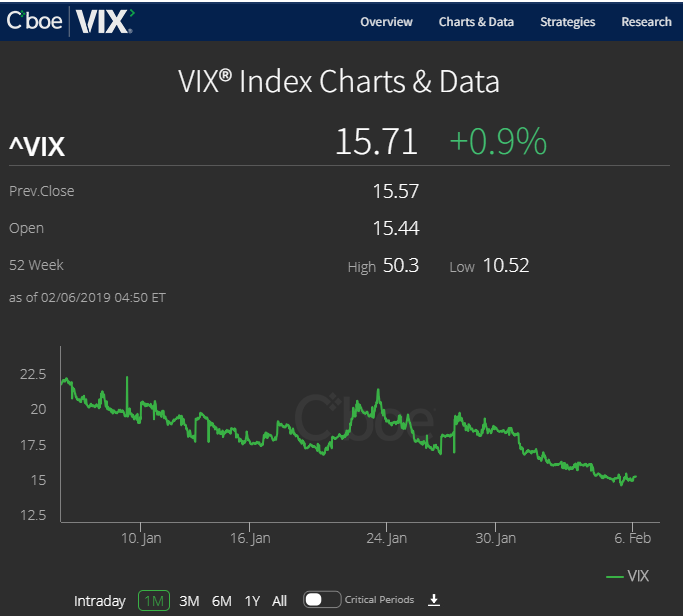 Right now for example, we can see that the 200-day moving average, one of the most prominent technical indicators, is making headlines.

It’s not just the S&P 500 either. Many major stock indices are now testing their 200 days average price.

Unlike the stock markets which tend to adjust for underlying metrics rather quickly. The price of bitcoin remains characteristically detached from its own fundamentals, instead remaining subservient to technical analysis.

In Monday’s market update (titled: Good Luck!!) we gave a technical update that showed bitcoin once again was coming to the point of a giant descending triangle.

The nature of this particular pattern is that the flat line (psychological level) is usually the one that breaks first, as it has done six times over the last year. This could be why we’re seeing some losses this morning.

However, if we look at the fundamentals of the Bitcoin blockchain, they’re actually quite strong!!

By looking at this graph we can easily see that the number of transactions being processed in bitcoin has been growing increasingly during the bear market and is now reaching levels that have previously been seen only during the 2017 bull run.

A quick look at the volumes from the peer to peer bitcoin trading site local bitcoins, which is now back online, will show you that usage is rising steadily in emerging market countries such as India, Kenya, Nigeria, and across Latin America.

Of course, these metrics are difficult to evaluate over time due to the extreme volatility in bitcoin’s price. As we can see in the global graph often times more BTC will be traded when the cost per coin is lower.

However, for those citing reduced volumes across crypto exchanges lately, what I can say is that you’re missing the big picture.

The volume traded across global crypto exchanges has indeed come down from their peak last January of $70 billion to now about $15 billion a day. What we need to remember though is that this is a brand new market and to see volumes leveling out at these amounts is an incredible feat. Especially considering that the first time daily volumes ever exceeded $1 billion was in Q2 of 2017.

For me anyway, this is more of a glass half full scenario. Or even if some might see the glass as only a quarter full, it still contains liquid that previously did not exist and now holds value.

Have an awesome day!!

Mass Adoption Closer Than Ever

Mass adoption of cryptoassets now seems closer than ever. Yesterday, the crypto community was rocked by this news… The funny thing is, now that we have the option to pay our...

‘Bitcoin Could Certainly Use a Breather,’ Says Senior Market Analyst

How are you at spending and saving money? Turns out, the answer may vary depending on your sex. In our effort to uncover what drives people to make good investments, we recently ran a...

Public Interest in Bitcoin is Just Getting Started

What amazes me is that despite seeing record levels of trading volumes across crypto exchanges, on the bitcoin futures market, and even on the bitcoin blockchain itself, public...