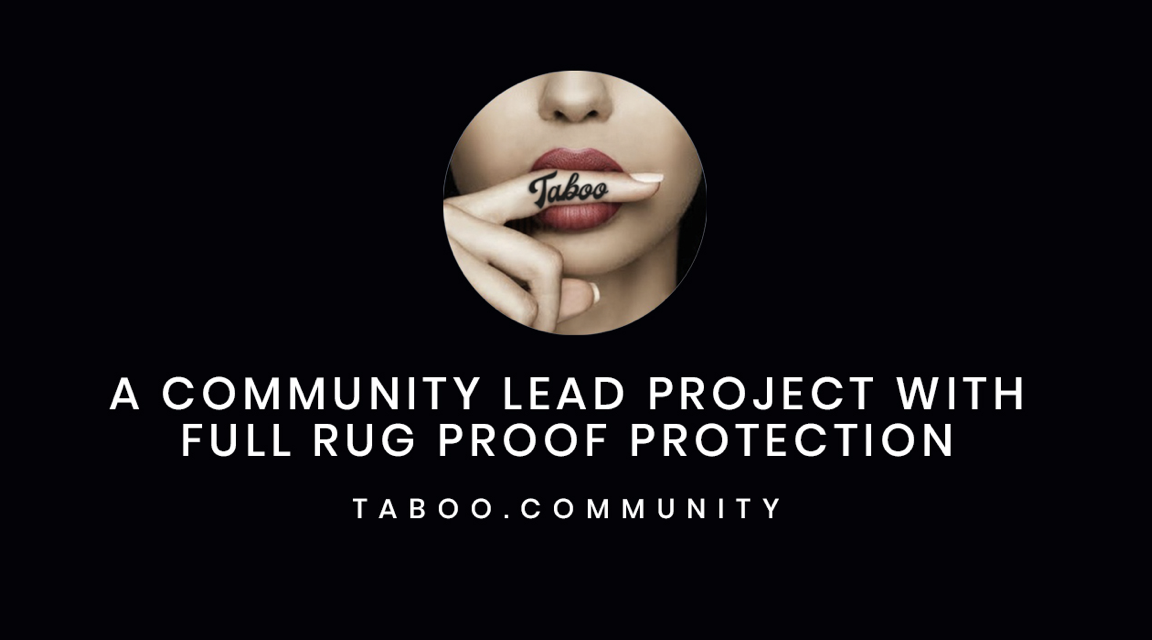 by Bitcoinist
in Press releases
18

Taboo, a community lead project launches a deflationary meme token with its own NFT marketplace. It has a built in static rewards program where holders earn passively through the 5% tax distribution to token holders.

TABOO is an entertainment and media-based blockchain tech project utilizing NFTs to create an exciting future. The community driven blockchain technology project is utilizing NFTs to create an excited and most importantly happy long-term holder. It’s a deflationary meme token bringing exclusive never-seen-before uncensored NFT content from the adult world exclusively for the community members. The firm is currently in talks with CoinMarketCap for listing while its airdrop program is live. The project is also going to deploy its own NFT marketplace based on adult entertainment content without depending on any third party.

TABOO understands that the fundamentals of a successful coin have to be MARKETING! Thus the project has been developed to bring in community interest. This bull season has given rise to several crypto phenomena, the most prominent being community driven meme tokens and the craze around non-fungible token (NFT). Taboo brings the best of both the worlds with its deflatory meme coin along with a NFT platform that offers opportunity to one and all.

Until now meme currencies were seen only as a meme with no real value or use case, however that has changed significantly this bull seasons, as being a community driven project these are not just truly decentralized, but the community can lead to many new use cases be it as a form of payment, or using it for staking to earn passive rewards. Similarly, NFTs are not a new phenomenon and has been in the space for over 2 years now. Until now its use case was limited to being used as a fan token for different sports clubs and video game in-game memorabilia. However, this bull season it has exploded to become the favorite of many mainstream artists and celebrities who are auctioning their rare art pieces and memorabilia for millions of dollars.

Taboo aims to reform the adult entertainment industry with its meme token and NFT auction platform. Thus the project has the potential to breach $100 million market cap while also ensuring that the platform can be accessible for artists to sell.

TABOO is a community lead project with full rug proof protection enabling a fully safe environment for all the investors with a fully locked liquidity pool. Rug-pulls have become a norm of sort in bull market as the popularity of any new use cases draw high interest as well as vulnerability. Scammers often prey on the new comers looking to make some quick money and as a result any new project gets millions of liquidity in matter of days, and with enough funds in their pockets, the project vanishes without a trace. Taboo eradicates the possibility of the rug-pull with its locked liquidity pool.

Loyal holders are rewarded with a share of every transaction where with every transaction, 2% is permanently burned from the supply meaning the amount of token in existence is always going down, therefore, making this token harder and harder to get hold of which in turn will increase the tokens price. 5% is distributed to all of the holders which means the amount of tokens in a user’s wallet is ever increasing.

The TABOO team is an entertainment and publishing blockchain platform initiative that uses NFTs to build an inspired and, most importantly, satisfied long term holders. They are a deflationary meme token that brings unique never-before-seen uncensored NFT material from world renowned beauties.

TABOO’s staff understands that the fundamentals of a good coin must be MARKETING! They need a crowd whose values are shared, and there is no question that as a group, they will push this coin well beyond the $1 Billion market cap in no time.

Out of the total market circulation supply of the Taboo token, 88% has been locked for the community use. 6% of the total tokens would be used for marketing purposes, while another 6% is saved for the developers of the project.

Taboo is bringing the adult entertainment industry on the blockchain driven by the community. The project has potential to emerge as one of the most innovative platforms to emerge out this bull season with its unique take on community driven project, meme tokens and NFT marketplace combined.