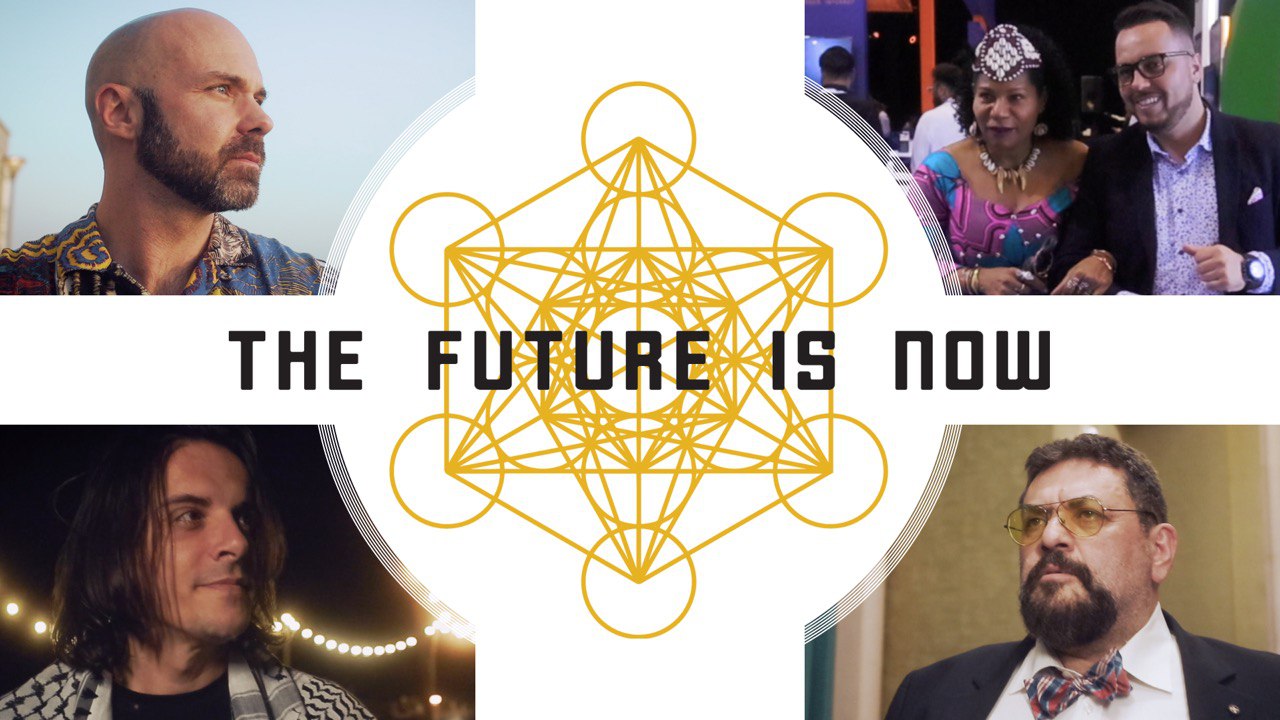 The first cinematic NFT project “The Future is Now Film”, known for its coverage of major Blockchain events over the last five years, is releasing two all-new episodes dedicated to Web3 & Emerging Tech, highlighting their potential in fueling economic development at a global level.

Founder & CEO of “The Future is Now DAO” Miguel Francis-Santiago and the subsequent author of the film series, having over 20 years of experience in media and filmmaking, reveals in this interview what the Web3 industry has in store for Africa and why the African region remains the indisputable leader in global crypto mass adoption while also showing how the crypto industry has changed in recent years amid the bull runs and the following bear markets, as he takes us through AIBC Summit Asia with an eye on Africa, which took place in Dubai earlier this year.

Q: The latest episode of The Future is Now introduces us to the African blockchain world, its challenges and trends, its opinion leaders and successful entrepreneurs. Why did your lens turn to the African market? Why do you find it attractive, deserving attention?

A: Honestly it was just a great pull by my good friend Eman Pulis and his Blockchain event brand AIBC which was held in Dubai in March 2022. From Akon to Queen Diambi of Congo and many companies that actually do things in Africa like 3air in Sierra Leone with its blockchain internet and Revoland with learn-to-earn GameFi in Ethiopia, this event highlighted Africa for me like never before, Dubai being the perfect MENA congregation point. And let’s be honest here, we’re standing at the shift of the world order. The African continent has been ripped apart by this order over the years, from resources to purposeful deprivation in education and technology. Queen Diambi shared a great example of this in the latest episode “Saving the Future” of our film series that, prior to colonization, Africa was one of the more advanced civilizations out there, ruled in a very decentralized fashion contrary to what many people think. Now Africa has all the talent and the people necessary to bring further mass adoption of Web3 and blockchain to the masses. You do know that it is the most Bitcoin adopted country out there? And the reason is because this adoption comes from necessity and need, unlike here in the Western world where everyone has a debit card and a form of trade for their goods and services. 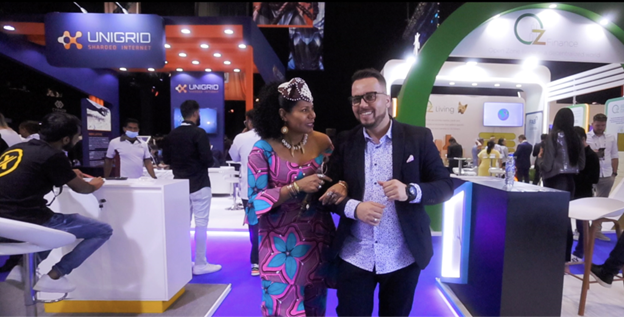 Queen Diambi Kabatusuila, Queen of the National Order of the Leopard, Founder Elikia Hope Foundation, and Miguel Francis-Santiago, Founder of The Future is Now DAO and Editor-in-Chief of “The Future Is Now Film”

Q: There’s a lot of controversy around Web3 and its economic mechanics, Play-to-Earn business models, etc. Some enthusiasts claim Web3 could help developing countries to beat unemployment, low wages, poverty, even starvation. Others insist that it is a scam and Ponzi scheme. What did you see through your cinematographic lens? May Web3 promote economic development in these countries?

A: Absolutely, I mean, look, Web3 is just another layer on top of this world, with a little kick to it in the form of the new internet of money and the ability of having intrinsic, immutable value through blockchain innovation. The danger is that according to the policies of the WEF, COVID19 has brought on the digitization of the world, but in a much more centralized manner than ever before, essentially acting as an excuse to reduce the carbon footprint and shift the masses further into the world of digital existence. That’s a whole other topic but this is the kicker. Web3 can easily be manipulated by the very companies that have allegiances to these global megatrends like Meta or Google. And we all know the pros and cons to such a centralized platform that essentially has algorithms that limit your freedom of speech, track your every move, and feed you AI based information to potentially even manipulate your public opinion. If you add a CBDC and a social credit rating fines system to a Web3 social media platform like Facebook or Twitter, I am sure you can imagine how that can go very wrong and very quickly.

With that said, real decentralized Web3 with actual decentralized cryptocurrencies that is not a part of some centralized umbrella of companies is the answer to truly fixing unemployment, poverty and other issues that have to do with Web2 and the old world order, which as we see with today’s dollar inflation and global geopolitical problems is the actual inflated bubble Ponzi scheme.

A: Right, as I mentioned earlier why Africa has the highest rate of cryptocurrency adoption with specifically Nigeria, is simply because it comes out of necessity. People there used to trade cell phone minutes as a medium of currency, and it was of more value than the actual fiat money! Because with minutes you can talk, you can browse the internet etc. So the people there were already essentially using digital value of exchange with a utility, much like many cryptocurrency projects I’ve met at AIBC. 3air, for example, are pioneering blockchain internet through microwave technology in Sierra Leone headed by Sandi Bitenc, and are using a similar commerce concept where the providers of the mesh-network also make the 3air token which they can later use as cashable currency or use for trade with other community members in the city, and that’s just the first pilot city of the company.

Another great example is something called Learn-to-Earn, a GameFi type of approach to learning, where students get paid in digital coins for completing tasks around learning how to GameFi, which is something that Jimmy Zhao with Revoland, another innovator from our film, is currently spearheading in Nigeria. 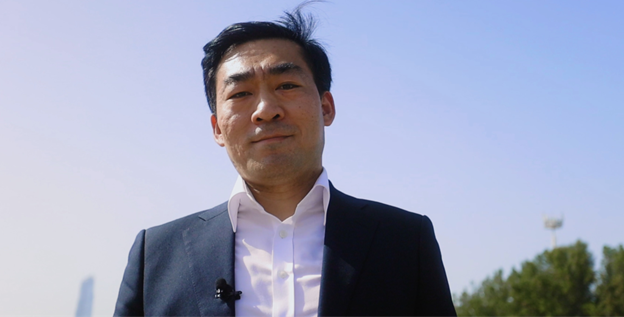 Q: In one of your past interviews you said that you would like to get away from politics. But don’t you think that blockchain and decentralization are very much about politics, about managing states, financial systems, about a more reasonable distribution of power in any area?

A: Absolutely, in most of my films I think my world view about getting away from this authority of control is always present. I grew up between the two superpowers being a Russian-American, and yes it is a difficult situation considering that both places pose as an archnemesis towards each other. However, hegemony of control stretches far beyond that dynamic. The printing press and the tokenomics of the dollar, as Nick Spanos mentions in our latest episode “Saving The Future” at AIBC Summit, exemplifies “the biggest shitcoin that you would never buy” if you only knew how it functions. I think our industry is clear about that, this is what the pioneers of the future are shifting for the better.

The founder of AIBC Eman Pulis looks at it through the Japanese concept of Ikigai, which is a word that cannot be translated to English, but it goes something like – do you like what you do? Are you good at it? Does it benefit the world? And are you generating the sort of life you wished for by doing so? Eman founded a whole venture fund called Ikigai Ventures, that seeks these sort of values in teams and start ups and helps them get to where they want to be, which I think is exactly how we can start creating a more equitable and encompassing world. 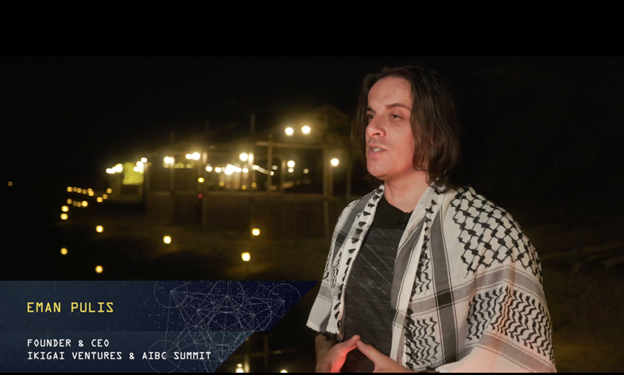 ACTA Finance with Christof Waton, who is also featured in the film, bring about DeFi services that combine into an ecosystem of essentially going above the limits that the dollar tokenomics have set for the world. While Jin Gonzalez has erected a whole ecozone and tax free, portable citizenship for innovators in the space of emerging tech with their company Oz Living and under the support of the Philippines Government.

These are the solutions I like to talk about, because they literally help us secede a world order that is proving to fail. New world can only be built on the ashes of the old, as it consumes and collapses in on itself.

Q: You dived into the blockchain world in 2017, when the crypto market was demonstrating extremely strong growth. Then you witnessed the crypto winter, a new bull cycle and now a new wave of recession. How has your attitude to this topic evolved within these five years?

A: I think I’ve matured in regards to Bitcoin’s price the same way the market and the community have matured. If you look at the first major Bitcoin boom that placed it into national headlines in 2017, and then the evident crash that followed with several years of hiccups that took us all the way down to $3800 in 2020, this was the last major set of “resets” for the crypto world where people actually felt the downturn. Many left, some good actors but mostly bad, the players that needed to be flushed out anyway, and overall the bus had several stops where it lowered itself to a price point where others could load up for the next ride. What we see today is a much more mature reaction to global trends, which now literally include the Four Horsemen of the Apocalypse with Plague, Conquest, War and Poverty, and yet Bitcoin is holding steadily around $20,000 throughout all this time. Sure, the bear market always flushes companies out that need to be flushed or haven’t lived up to their promises which is certainly a good thing, but considering the world events I’ve described above, maturity of the crypto market and its reaction to even the stock market falling miserably and bubbles like LUNA crumbling, the current reaction can only be described as something that is as solid as it can be. People are working, building and developing. As my good friend Brock Pierce likes to say, bull markets produce BS, while bear markets bear the fruits.

Q: How could you describe the new episodes of ‘The Future is Now Film’ in several words?

A: Over the last 5 years we’ve grown our audience quite a bit, as you know our film series by the community for the community aims to scale blockchain mass adoption through cinema and storytelling, public relations and our consulting arm at TFIN DAO. Our main objective now is to create a community of innovators, capital and tools that will amplify everyone who is a part of The Future is Now DAO.

Our latest two episodes were shot in the summer of 2022 and are coming out soon on our Youtube channel. Both AIBC Summit 2022 “Saving The Future” and WOW Summit 2022 “World of Web3” were shot in Dubai but with radically different content, message and verticals, loaded with excitement and what we like to call “infotainment”. AIBC is all about Africa, MENA and banking the unbanked, while WOW is about Web3, and almost exclusively about Metaverses and the prospect of Dubai taking a government initiative to make it a first city-wide official Metaverse. Over the last 5 years we’ve interviewed thought leaders from all over the world such as Akon, John McAfee, Larry King, Justin Sun, Tim Draper, Brock Pierce, Queen Diambi and so many others. I invite everyone out there who is both new and old to the world of disruptive tech and Web3 to join us through our website and get some popcorn for a deep dive into the world of blockchain that Bitcoin’s disruption has created around the world.