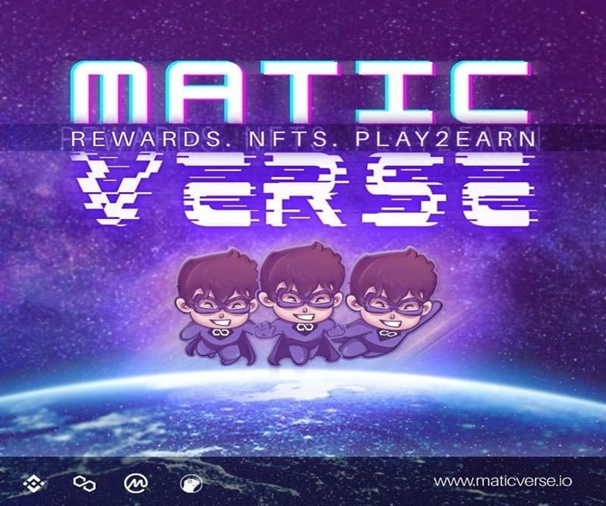 The Future of Crypto Is in GameFi And MaticVerse Is Here To Build The Most Playable Games Around!

The world of cryptocurrency is experiencing a storm of innovation right now, especially with the rise of GameFi and NFTs. There is no doubt that NFTs have come a long way since their humble beginnings, with their initial entry with the launch of CryptoPunks.

One of the biggest reasons for NFT growth is the industry’s ability to build value for creators, which can now be seen in new implementations of it in video games, more popularly known as GameFi.

And MaticVerse is coming out to be a “game” changer in this sector. MaticVerse is a superhero NFT and play-to-earn gaming token on BSC and Polygon that also rewards holders with hourly airdrops of MATIC.

With the recent launch of its NFT marketplace, MaticVerse has also made available Baby Vengers NFTs using 18 unique superheroes, with a variety of rarities and traits that you can discover by minting them from their NFT crystals.

Previously called BabyMatic, MaticVerse has managed to provide holders with more than 700,000 Matic tokens, which is equivalent to over $1 million right now.  It also achieved a market capitalization of $10 million, which was 80 times its original market cap.

With over 9000 Telegram members and a strategic partnership with the famous marketing company BLOCKWIZ, MaticVerse has come a long way from its humble beginnings as BabyMatic. And the most important thing that it has accomplished is its relationship with its parent token, Polygon MATIC.

The roadmap for this year for MaticVerse includes the release of Baby Vengers NFTs, and also its integration with a top 15 cryptocurrency next month. The beta of their game is now live, and the complete game will release on November 1, 2021.

Since MaticVerse is a P2E (play to earn) GameFi project, its roadmap is quite elaborate. The plan of Q4 2021 includes the release of the game, launchpad for Matic projects, top 20 CEX listing, and much more in the future.

Taxation Model and Tokenomics of Maticverse

The tokenomics of MaticVerse consists a total of 200 billion each for BSC and Polygon. BSC tokenomics comprises:

With MaticVerse’s upcoming integration with a top 15 cryptocurrency, CEX listing by the end of this month, and the game launching in less than 2 weeks, the world of MaticVerse is growing a fast pace. 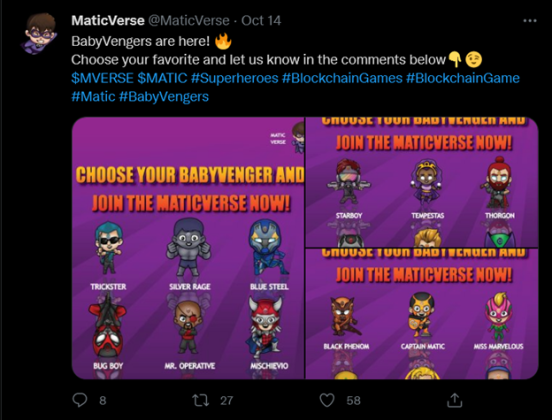 With the recent release of Baby Vengers and the upcoming launch of the game, MaticVerse has a great planned road ahead of it. Phase 1 will see the launch of a PvE battle game that follows the stories of the characters in Baby Vengers – all 18 of them.

Using the characters, you’ll be able to level up by defeating villains and thereby earn MaticVerse exclusive rewards through your progress. Phase 2 will see the introduction of new PvP battle modes where users will be able to battle amongst each other, and also the release of the game on iOS and Android.

At last, phase 3 of the game will be the release of the game on PC and all console platforms. And most importantly the addition of the free-roaming RPG game mode will build an incredible and immersive experience for the users.

MaticVerse is about to reach lightspeed! So strap your seatbelts now and enjoy the ride!

For more information join MaticVerse’s Telegram community – https://t.me/MaticVerse, also check them out on Twitter and Medium to stay updated on their latest advancements.