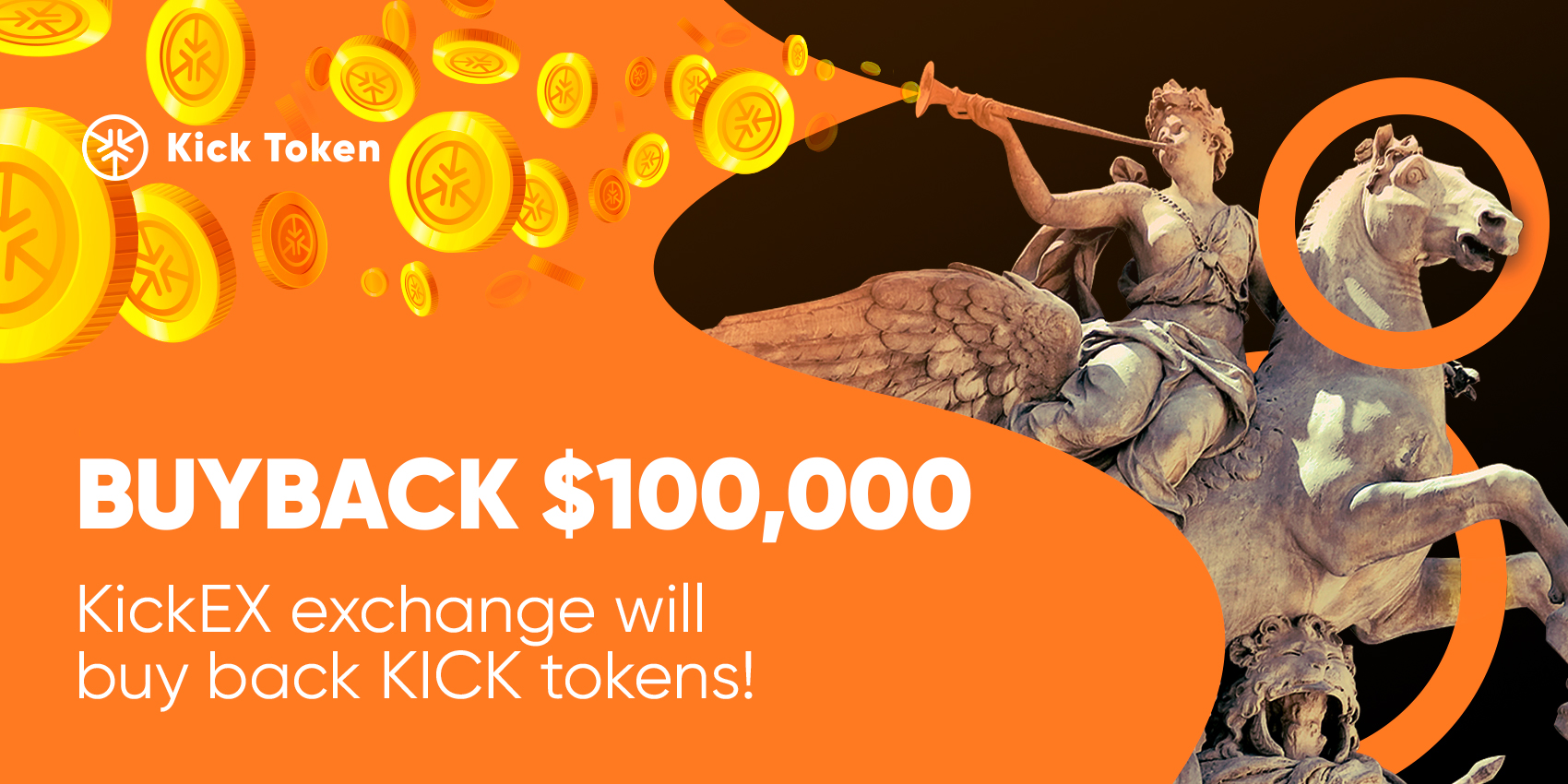 KickEX Exchange Will Buyback KickTokens at a Price of $0.00015 Per Token

The buyback will be carried out only on the KickEX exchange and according to specific conditions. To participate in the buyback, token holders must register on the KickEX exchange, successfully pass KYC and place a limit order to sell KICK in the KICK / USDT pair in the 24 hour period before 12:00 UTC on September 1, 2020.

I’ve always had and still have very ambitious plans. I know for sure that the Kick Ecosystem will become a global phenomenon that will unite entire countries into one decentralized financial ecosystem. We started making DeFi before no one had heard of it, in 2015. We successfully and on time got into the ICO hype and now we will play a major role  during the DeFi hype. But hype is not the point. Once again we are in the right place at the right time. This is not luck, it is the correlation between our vision and reality, the ability to foresee how the industry will develop. But at the same time, I understand that in order to fly a helicopter, you must first make a scooter. We are moving along as planned, and this buyback is one of the important steps in promoting the KickEX exchange, the fundamental node of the entire ecosystem.

How does the buyback work? The KickEX exchange buys back orders for sale with the KICK token at a price not lower than $0.00015. The uniqueness of this redemption is in its fair mechanics — absolutely every participant who puts KICK tokens for sale in the KICK / USDT pair will be able to sell all or at least part of their tokens, provided their order is relatively small. Only limit orders will be redeemed.

How do I get involved?

Approximately 10 minutes before the start of the buyback, trading in the KICK / USDT pair on the KickEX exchange will be stopped, and the formation of a pool of orders for the buyback will begin.

Learn more about the buyback mechanics

The buyback order exchanges KickTokens for USDT in the KICK / USDT pair market in equal amounts from all users whose limit orders are in the order book at the time of buyback, at or lower than the buyback price. This order will be triggered at 12:00 UTC.

At the moment before execution, the order calculates how many KICK tokens will be redeemed from each user. The calculation is carried out cyclically, which means that for each order in the order book at the time of the buyback, the price of which does not exceed or is equal to the buyback price ($ 0.00015), the order will reserve a fixed value of the KickToken in equal parts. The value is determined by the smallest order in the order book, for example, it can be an order of only 1000 KICK.

After the buyback order “buys off” a small part of every existing order, a check will be made to see if there are funds left in the buyback order to buy tokens. If so, the mechanism will start the next cycle of calculations, reserving a small part for each order in the order book. Next, the difference between the next largest order in the order book and the one that has already been processed is recalculated. This continues until either there are no counter orders in the order book, or until the funds in the buyout order run out.

When there are no tokens left for the purchase, or the buyback amount is reached, the reserved funds are purchased. It happens once, at the same time, and the calculated amount is redeemed from each order. After that, the buyback is completed and the order is terminated. Orders that are created after the buyback has begun are not redeemed and will be treated as if under normal market conditions. Orders that were withdrawn by the seller at the time that the buyback was triggered will also not be redeemed.

If funds remain in the buyback at the time of its completion, then it is completed (for example, an order tried to buy 100,000 KICK from a counter order that had only 10,000 KICK, and there were no other counter orders left in the order book).

If the same user has placed more than one order, their volumes are summed up, and all orders are considered as one large order. Thus, those users who place many different orders will not be able to sell more than if they simply placed one large order.

What will happen to the repurchased KickTokens? The redeemed tokens will be removed from circulation and frozen forever — in practical terms, burned. Tokens are not intentionally burned so that there is no negative impact on the capitalization of the KICK token, and does not impact the token’s position in rankings. Perhaps later these tokens will be burned when their liquidation will not affect its ranking position.

The results will be as transparent as possible and full details of the results will be published on our official website. We draw your attention to the fact that the report on the results of the buyback will contain the public nicknames of the participants, which users receive when registering on the KickEX exchange automatically (nicknames can be changed in your settings).

This buyback will be the first in a series of KICK token buybacks to be carried out on the KickEX exchange and is specifically implemented for a small amount, as this is an experimental buyback of tokens and a test of the mechanism. Each time the buyback mechanics will change, improve, and target different audiences: holders of a small volume of tokens, “whales” of the KICK token, and newcomers. Each new buyback will be more interesting, technologically advanced and better than the previous one. You can follow the news and announcements of new token buybacks on the KickEX exchange.

Participate in the buyback on this link!