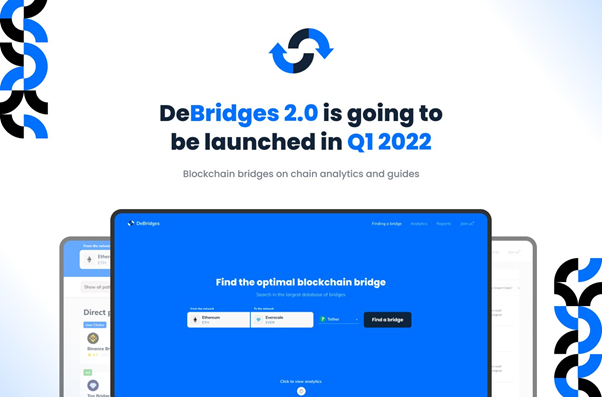 The largest platform for aggregation of blockchain bridges DeBridges.com, preparing to release the second version with on-chain analytics.

Since the first cryptocurrency whitepaper surfaced in 2008, it’s no secret there have been several other phenomenal ideas of how a blockchain network should function. Holistically, most blockchain network releases have attempted to strike a balance between decentralization, scalability, and security, three key elements described by the founder of Ethereum, Vitalik Buterin, as the scalability trilemma.

Truthfully, there’s no perfect blockchain ecosystem, and enthusiasts have embraced the uniqueness of each blockchain network and the subsequent evolution of cryptocurrencies over the years. However, as much as the explosion of various blockchain networks has been healthy, there remains a huge gap in interconnection as most networks are not fundamentally enabled to interact with each other.

Debridges and the blockchain bridge ecosystem.

On the one hand, centralized exchanges are fundamentally not blockchain wallets but attempt to store different cryptocurrencies in one place. They are also not able to transfer between different chains. On the other hand, blockchain bridges are the most successful attempts to transfer data from one blockchain network to another by using different interoperable models while attempting to retain the fundamental principles of decentralization.

During the first week of launch, Debridges had over 1,500 visitors. Some owners of the different bridges also reached out to clarify and update data and subsequently express their interest in the project. The aggregator pulls relevant information about each bridge, including a brief description, supported blockchains and networks, bridge token, and audits. Overall, data is added to the aggregator every day to improve the user experience.

After a successful couple of weeks and increased community activity, Debridges will release a second version. The second version features a deeper analytical on-chain data for every bridge in blockchain networks. According to the Debridges team, the aggregator would also still include quarterly reports of capital movements between networks, ranking in terms of transaction volume, token popularity, and several other interesting parameters.

Without a doubt, Debridges is growing to be a leader in cryptoanalysis and, most importantly, the best aggregator for all blockchain cross-chain bridges. Overall, the aim of Debridges is quite simple: enable blockchain enthusiasts to transfer their liquid assets between different chains at the best available fees and other possible conditions.

In version 2.0 of the platform, the team promises to launch a new service for selecting a suitable route for moving assets from one network to another. The aggregator would display every possible route to complete a cross-chain transaction. Moreover, even for networks that are not currently connected by direct bridges, 2-stage paths will be shown.

It’s very similar to buying an airline ticket. You can buy a direct flight, but if there is no direct connection between the cities, you will be offered a connecting flight and a specific airline. It’s the same here. Funds leave one network through a specific bridge, then “transfer” to another network, and through a specific bridge, your funds are already at the final destination. The user only has to choose a preferable route in terms of cost, speed, effectiveness, or even security.

The Debridges community is growing to be the most important contributor to the aggregator. The developers actively seek feedback as they work on new product categories and improve on the aggregator. Click here to join the telegram channel to be a part of the community. 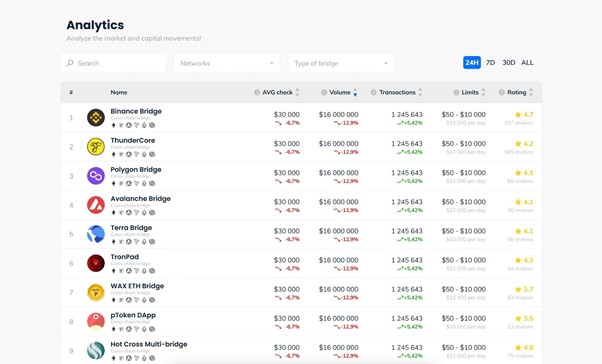