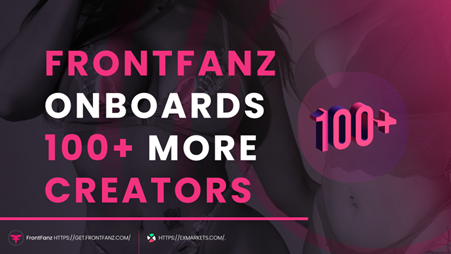 The Web3 content subscription platform has signed 500+ creators with over 40 million followers across social media and over 60 million in subscription earnings.

FrontFanz, the female-led venture founded by Rosey Sin and Stacey Carlaa, has announced its next wave of content creator acquisitions, unveiling over 100 new creators set to join the Web3 platform at launch. Led by Courtney Ann and Tracy Kiss, who each have over 1.2 million followers on Instagram alone, this latest addition represents the next wave of content creators who have abandoned their traditional platforms and are making the jump into Web3 through FrontFanz.

A Platform Built By Creators, For Creators

FrontFranz is a subscription-based content platform built on the ethos of privacy, anonymity, and zero censorship. FrontFanz uses its polygon-built platform to bring content directly to users and break away from the banks, payment processors, and other vendors who have restricted platform access to the creators they deem ‘acceptable.’ The platform and its $FANZ token will allow users to create an account without user name, email, or credit card information. At the same time, creators can monetize their brand and engage with their audiences with zero fear of videos being taken down, demonetized, or de-platformed.

The project recently completed its IEO on EXMarkets. As a 20-day Dutch Auction styled IEO, the token sale was designed to sell a small amount each day, preventing whales from purchasing the entire supply and giving the thousands of global community members the chance to participate. The IEO was sold out, and the team is gearing up for a direct listing on ExMarkets on August 15th.

With the platform in its finishing stages of development, the team and its 500+ creators are set to go live in Q4. The platform includes several features creators and fans are used to, like subscription-based videos, direct messaging, and tipping, plus new features like live-streaming, facetime, NFTs, creator coins, and governance, allowing $FANZ holders to vote on upcoming platform upgrades.

FrontFanz is the next evolution in the distribution of fan-based content sharing. The platform boasts a censorship-resistant model where content creators can create content, engage fans, and grow their brand without fear of demonetization. For more news on FrontFanz, and how to sign up, please head over to our website. Settle in.