The next Binance? Why is MXC Exchange so popular in the Chinese market?

On February 8, Bloomberg reported that the price of MXC exchange cryptocurrency token MX broke $0.71, a year-on-year increase of 10 times. On February 7, the average increase of exchange tokens was 5.94%, and MX led the increase with 49.31%.

On February 6, according to Crypto Department data, MX was the only exchange token among the top five highest-yielding assets that day with a 62% increase. 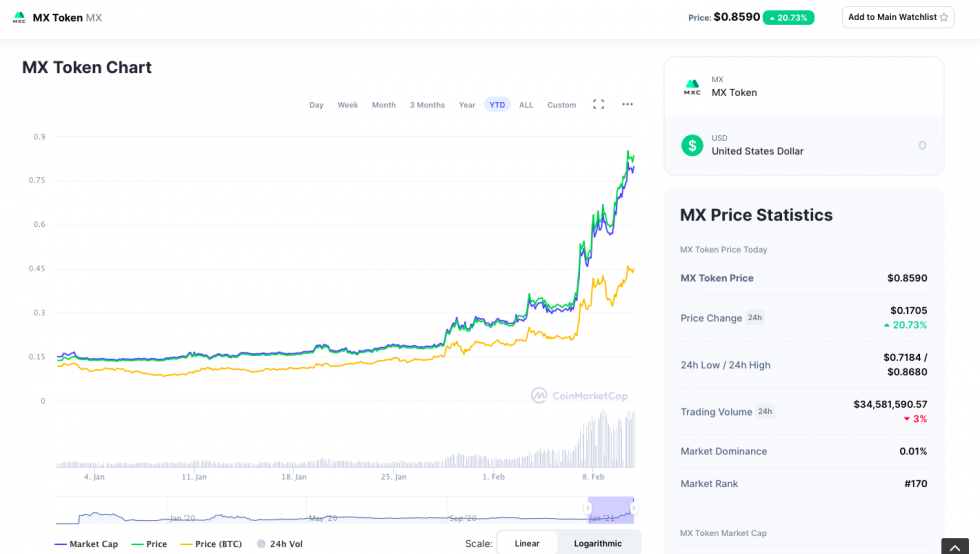 People can’t help but be surprised to find that the exchange, founded in 2018, has become a rising star in the Chinese market in addition to the three established exchanges – Binance, OKEx, and Huobi in less than two years. It even overwhelmed the limelight of the three big brothers in the DeFi boom in October 2020.

Those tokens listed on MXC such as DeFi and Polkadot tokens were listed on platforms such as Binance and Coinbase a few days after, and early holders of these assets received hundreds of times the reward. MXC, which has always been little-known, has made the market look up to the eye. Some analysts even believe that MXC would possibly be the next Binance.

Such views are not groundless. Being able to survive the extremely crowded race track of the exchange in 2018, and catch up to second place in the industry, has already demonstrated the combat capability of MXC. Today, its daily trading volume has accounted for 5% of the global market share, and its users are distributed in English, Russian, Korean, Portuguese, Turkish, Vietnamese, Hindi, Malay, India, Africa, and other large language areas or countries. Its business covers trading scenarios such as spots, leverage, ETF, contract, and PoS mining pool. Therefore, in the bull market led by Wall Street, the pump of MX price is actually a return of value.

In the past few years, Binance coin BNB, Huobi token HT, OKEx coin OKB, and MXC exchange token MX have achieved different value growth in different business scenarios. Compared with the three top exchanges in the Chinese market, MX might not have the highest in market value, but its growth rate is second only to Binance.

The market believes that MXC’s early deployment in DeFi, Polkadot, NFTs and other cryptocurrency segments will give it a huge advantage in 2021. Because the three areas of DeFi, Polkadot, and NFTs are just the outlets for the next few years, the trend in early 2021 has become obvious. This is one of the reasons why MX has skyrocketed recently.

“If you have missed BNB, then don’t miss MX again.” This is the most frequently seen sentence in the Chinese crypto community lately.

The reason why MXC can break out in a red sea is because of the “user-friendly” mission it has been insisting on. This is a hard way, but it is also the right way. The market in 2018 has been basically monopolized by the top three exchanges, but you should never look down on the little ones. MXC insists on taking a user-friendly approach, and it turns out that they did it right.

According to the official data of MXC, from January 1, 2020, to March 31, the number of one-to-one receptions during the MXC customer service period was 9,043, and a total of 1,879,280 messages were received individually, and user satisfaction was 97.89%. At the same time, the first response time of MXC user services has been increased from 25s to 20s, and the average response time has been increased from 34s to 30s.

In addition, MXC has successively obtained the Estonian MTR license, the US MSB license, the Australian AUSTRAC license, and the Canadian compliance operating license.