April 5, 2016 — Trying to decide if Bitcoin is a currency or an investment is not unlike trying to discern whether light is a particle or a wave. The correct answer of course is, it’s both. Bitcoin faces a multitude of battlefronts that may obstruct it from further pushing into the mainstream, as a universally accepted currency. 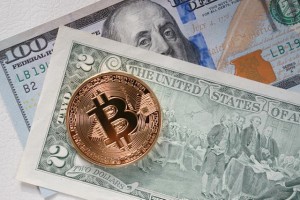 Whether from within, externally, or fundamentally, through design or accident, Bitcoin is up against the real-world pressures of accommodating to wide-spread use. Most notable is the question of scalability, which, if left unsolved, will almost certainly spell disaster for the invention of Satoshi Nakamoto.

Positive news arrived last week with the announcement of a $900,000 Bitcoin Developer Fund for MIT’s Digital Currency Initiative, the institution’s first foray into the Bitcoin and blockchain world.

However, in it Malmo concludes, “Taking it off the line and into the academic realm could just be the shot in the arm that bitcoin needs to move forward with new ideas.” He further states earlier in the article, “To move forward, it may just need a place to grow without these real-world constraints.”

The problem is that the slew of issues — the battlefronts — Bitcoin is up against will not suddenly cease, not to mention a key competitor currently surging in popularity (See Related articles) coupled with backing from a particular tech giant.

The crucial thing, as Van der Laan told CoinDesk in late January, “The time of discussion and planning is over for now and we need to move on with actually realizing the roadmap.”

But let’s first backtrack a bit.

In Cyprus, in 2013, amid the banking crisis, many Greek citizens looked to Bitcoin as a means of placing their money in a place the government could not reach.

Put your feet in the shoes of government then and it’s quite clear why they would be hard pressed to accept an alternate unit of account or exchange as a viable option alongside their own sovereign fiat.

The Cyprus episode catapulted the cryptocurrency to new heights, as Guillaume Babin-Tremblay, executive director of the Bitcoin Embassy in Montreal, Que iterated.

“Bitcoins were growing slowly until Cyprus. Cyprus was the catalyst for the big increase in the price,” said Babin-Tremblay, as quoted by Kitco News.

The price sat at $40 per Bitcoin and then doubled within a couple of days, according to Babin-Tremblay, with Kitco News reporting, “Prices pushed towards $200, but dropped to about $60 after the banking crisis abated.”

Bitcoin offered Cypriots, who were at risk of having assets seized by the Central Bank of Cyprus, a place to put their money outside the reach of governments.

China, Argentina, Iceland and Russia, with their slumping economy the target of international sanctions and duly battered by the collapse in commodity prices, are all home to economies that have fomented a need for investors to seek an alternative vehicle of investment.

Right or wrong, this action, moving currency out of the domestic system, affects economic stability. Growth is also hindered when citizens move funds offshore for the obvious reasons that that money no longer feeds the national economy through taxation, consumer spending or on-hand capital for banks.

This is what investment in Bitcoin is tantamount to and, hence, the opposition to the cryptocurrency and the ensuing legislative battles.

The above example is also demonstrative of how and why a digital currency gains value and can experience intense volatility.

It’s quite circular in nature.

On one hand, it’s about demand, which in turn feeds the purchasing power of a currency. On the other hand, demand for investment in a particular currency oftentimes has to do with its purchasing power or value on the world market, otherwise, why invest?

Venezuela is an interesting example. There is projections its economy could inflate by 700 percent, according to the International Monetary Fund. This is the highest inflation rate in the world. The collapsing economy has driven entrepreneurs to Bitcoin as their preferred payment method.

This type of economic environment feeds demand for the cryptocurrency.

But the cryptocurrency is struggling to make a decisive choice. Relevancy as a legitimate currency, crypto- or otherwise, hangs in the balance with governments bearing down.

Pundits discuss Bitcoin’s prowess with a $6.3 billion market cap, compared to Ethereum’s cryptocurrency which, in second place, makes up just below $900 million in market cap at the time of writing this piece.

However, value, as we’ve seen in Bitcoin’s own history, is relative. Governance is needed; action is needed, as Van der Laan had espoused.

For the digital currency to move forward, beyond its current state of ambiguity the realization that a decentralized currency functioning via a laissez-faire environment or attitude does nothing to produce the most efficient, effective and secure monetary system.

The most talked of issue plaguing Bitcoin at the moment is the block size debate.

At the current 1MB size, by design it was supposed to take around 10 minutes. Under current conditions, this timeframe can stretch to anywhere from 45 minutes to a couple of hours. We know the time it takes in comparison with a credit card and so on.

Whether the delayed transaction time is a result of mining centralization in China is another debatable subject, just as the topic of the centralization of the mining network to the overall goal of Bitcoin itself is subject for discourse.

Bitcoin’s relevancy hangs in the winds of innovation and real-world action.

The $900,000 injection from Bitcoin-based companies is a small price to pay to resuscitate their lifeline, a cryptocurrency that commands billions and in which their enterprises are based, for the most part.

It all can evaporate, diminish just as Blackberry’s North American dominance vanished in the wake of competition.

Returning to Venezuela: Consider why citizens would select Bitcoin versus any of the alternatives. It has nothing to do with computational algorithms of the cryptocurrency; it has everything to do with the current store in value presupposed by demand.

Bitcoin’s core developers must start to fight through the battlefronts, and soon, otherwise Mike Hearn’s parting words will run as true as any tautology ever could.

As we know demand for a product is never guaranteed in this fiercely competitive environment and the items that plague Bitcoin, both internal and external, could spell its decline.

The Office of the Comptroller of the Currency (OCC), an independent arm of the U.S. Department of the Treasury responsible for administering the federal banking system, announced the desire to begin building a new FinTech framework that will help foster and develop the fast-growing industry.

On Thursday, the OCC released a whitepaper entitled “Supporting Responsible Innovation in the Federal Banking System,” which outlined the current state of the industry and discussed the development of a framework to “identify and evaluate” financial innovation, part of which involves education and dialogue.

Thomas Curry, U.S. Comptroller of Currency, said, “The OCC will approach innovation with our eyes wide open to the attendant risks, but also an open mind to promising new ideas and new technology.”

This shift in U.S. regulatory mindset comes alongside news global regulators are also looking to better manage the FinTech industry.

The Financial Stability Board meeting in Tokyo on Thursday agreed to examine the industry in components and begin assessing the potential risks within the main pockets of the FinTech ecosystem.

“The important thing for us as members of the FSB is to be moving in parallel with these developments and not be stifling innovation, but being able to apply them in a way that improves the resilience of the system,” said FSB Chairman and governor of the Bank of England, Mark Carney said, as reported by Reuters.

Reuters further reported, paraphrasing Carney as stating, policy intervention by other authorities such as in competition, conduct and consumer protection, would need come before any financial stability considerations.

The Hyperledger Project, a collaborative effort created to advance blockchain technology with an aim toward establishing an open-source platform, elected new leadership and gained new investment.

Appointments made by member vote saw Blythe Masters, CEO of Digital Asset Holdings, named as board chair. Additionally, Chris Ferris, engineer and CTO of open technology at IBM, was appointed as chair of the technical steering committee (TSC).

See Hyperledger.org for the list of TSC and Governing Board members.

Israel’s FinTech Hub Finally Gets a Permanent Residence
Based in the heart of Tel Aviv, The Floor lands in Stock Exchange

The Floor, Israel’s first FinTech hub established in 2015, has secure a permanent place of residence, landing in the Tel Aviv Stock Exchange in an 800 square meter leased property.

The hub secured $250 million from the Pando Group last year, a Chinese-backed venture capital fund based in the Virgin Islands.

At the start of March it was also announced Banco Santander had joined with HSBC, Intesa Sanpaolo and RBS to support The Floor, which opens officially this June.

The Floor is dubbed as a place to trade FinTech ideas with a proposed vision of providing partners and members “with value by nurturing innovation capable of delivering brilliant solutions to the global financial industry while securing Israel’s position as a prominent Fintech capital.”

The initiative is an interesting arrangement in that it will connect Israeli FinTech innovation with China.

Touted as an “experience for European innovators” and “catalyst for the growth and development of the payments and financial services ecosystem.” To register go to: money2020europe.com/register-2016. Event runs Apr. 4 – 7.

Coinfest, coined as Canada’s crypto-holiday, is celebrating this year’s event across multiple cities worldwide. Events will include geographically decentralized activities such as the International Hangout and the Decentralized Arcade, which allow mass participation on a global scale. The event will be held Apr. 5 – 10. For more information visit Coinfest.org.

The Innovate Finance Global Summit will champion and celebrate the latest developments in FinTech at the historical heart of financial services in London. The summit will feature bepsoke sessions, VIP keynotes and more. Conference is Apr. 11 with tickets available through Eventbrite.

The conference will bring together, Apr. 13 – 14, an unparalleled faculty of in-house counsel and compliance professionals, senior executives from industry-leading companies, high-level regulatory and enforcement officials, and top outside counsel. For more information visit, AmericanConference.com.