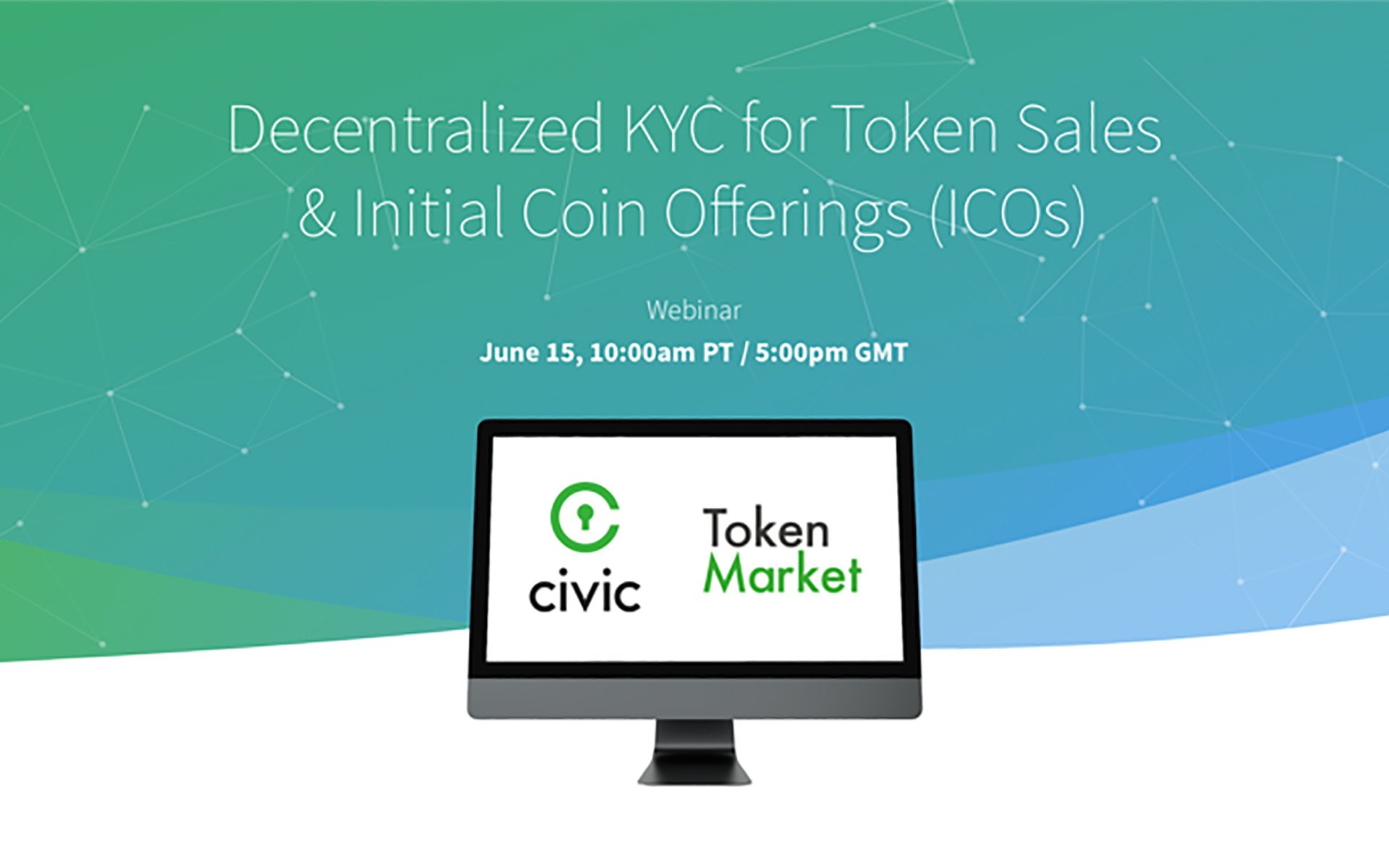 Gibraltar, GIB – June 13, 2018 — TokenMarket, the leading advisory expert on ICOs and Token Sales, is announcing a webinar with Civic, the leading blockchain identity verification technology provider. Civic Co-Founders Vinny Lingham and Jonathan Smith, are joined by TokenMarket CTO Mikko Ohtamaa for a discussion on Know-Your-Customer verification. The conversation will be focussed on Token Sales, ICOs and how this has evolved from a traditional, centralized format to a decentralized, user-controlled, reusable solution.

Decentralized KYC for Token Sales and Initial Coin Offerings is the first of Civic’s Decentralized Identity webinar series being launched Friday, June 15. Participants will have the chance to learn from industry experts on identity verification best practices. Civic and TokenMarket executives will discuss new ways of establishing trust by switching from knowledge-based authentication to possession-based authentication protocols, reducing the risks of impersonation, bad actors and hacks.

Personal information is fundamental to the way people interact with products and services online and offline. Currently, personal data is replicated and stored in central databases, which opens opportunity for data theft and security breaches. Civic’s decentralized, reusable KYC solution enables companies to authenticate users and verify their identity without the need for usernames or passwords and only collect the minimum need to know information for compliance purposes. This reduces the risks and cost associated with handling personal identity information. Civic announced a Reusable KYC solution for Token Sales and Initial Coin Offerings (ICOs) in February 2018 and has since enabled numerous ICOs and Token Sales to comply with KYC regulations.

TokenMarket has established themselves as the leader in the ICO advisory space, enabling hundreds of companies to issue their own tokens. The two companies first started working together prior to the Civic token generation event, with TokenMarket advising and executing the Civic token issuance.  They are now enabling companies that want to run ICOs or Token Sales to be fully compliant, reducing the risk for both the general public and the ICO operators.

“TokenMarket is excited to partner with Civic to share expertise about decentralized security solutions,” said TokenMarket CTO, Mikko Ohtamaa. “In addition, we will be partnering with Civic to launch our new smart contract technology, KAI, that will increase ease and speed for ICOs by combining KYC/AML and Accredited Investor details into a single manager for potential contributors. Civic will be our KAI’s launch case.”

“Our partnership with TokenMarket will enable millions of ICO participants to improve their user experience with the help of the Civic Reusable KYC solution, all while reducing risks and protecting their data against bad actors. KYC is becoming a must-have requirement to participate in ICOs and Token Sales, and users shouldn’t have to upload documents every time they need to prove who they are,” said Civic CTO and Co-Founder, Jonathan Smith. “We’re excited to bring a new level of security and professionalism to the token sale process, and we want to extend an invitation to join our discussion on June 15.”

This is the first in a webinar series that Civic will host on Decentralized Identity. Follow the www.civic.com/webinars page for more information on upcoming webinars.

TokenMarket is a premier ICO information portal and advisory firm. It combines its market experience, resources and data assets to create a professionally tailored solution to execute ICOs safely and securely, providing an end-to-end service for token creation, presale, and public sale. TokenMarket’s ICO advisory service has partnered over 30 token sales including Storj, Populous, Monaco, Civic, and Dent, raising over $300 million in total. Following the success of its ICO advisory service, TokenMarket is hosting its own 2-day conference “TokenMarket 2018: Insights Into The Token Economy”, which takes place on 28-29 June in Gibraltar. For more information on TokenMarket 2018 visit https://tokenmarket.net/conference-2018/home

Civic is a visionary blockchain identity verification technology that allows consumers to authorize the use of their identities in real-time. They are spearheading the development of an ecosystem that is designed to facilitate on-demand, secure, and low-cost access to identity verification services via the blockchain. Civic recently introduced a Civic token that participants in the ecosystem will use to provide and receive identity verification-related services. The company sold $33 million of its tokens during its token sale event in June 2017. For more information, visit https://www.civic.com