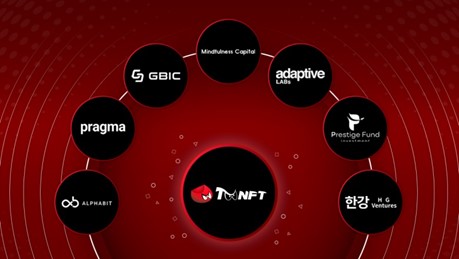 TooNFT is a blockchain-based webtoon platform that announced its launch on top of the ecosystem of South Korea’s largest Webtoon Company, Toomics. The TooNFT project has successfully raised $1.75 million in a private round to become a decentralized webtoon company.

As per the official announcement, HG Ventures led the private round and many prominent institutional investors participated in it. These investors include Adaptive Labs, Alphabet, Mindfulness Capital, GBIC, and Prestige Fund. The TooNFT’s affiliate company – Toomics is one of the largest webtoon service providers with 50 million active users and 10 million app downloads.

By utilizing the funds raised in the private round, TooNFT plans to bring technological innovation to the industry by implementing blockchain-based protocols, forming a highly advanced NFT ecosystem.

The affiliate of the TooNFT is Toomics, and it is a well-known South-Korean webtoon comics company with 10 million application downloads on both iOS and Android devices. The company was started back in 2015 raising 15 million USD from large capital ventures.

Now it has a large customer base, crossing 50 million users with 7 million monthly active users (MAU). Also, Toomics has signed partnerships with Tencent, GMarket, KEB Hana Bank, and AfreecaTV. And Toomics is now known as the largest webtoon provider in the world and it has received many awards from recognized institutions. Moreover, the firm annually produces a profit of $60 million from its premium subscriptions.

With a vision of embracing decentralization in the future, TooNFT platform has been launched on the Toomics ecosystem. This process will implement the NFT concept to the webtoon and comics.

The primary mission of TooNFT is the improvement of the environment by enabling a system that brings investment in a P2P format, skipping the need for intermediaries.

That’s why the company has raised a large amount of $1.75 million in their private and seed rounds to develop webtoon NFT infrastructure. This will allow integrating blockchain distributed ledger that will help improve the webtoon industry. By including the blockchain protocols, regular users will have easy access to invest without third-party involvement. It provides safe services with transparent data and staking. TooNFT is the world’s first decentralized webtoon platform for worldwide use.

It is worth noting that TooNFT will start providing services in 11 languages, including Korean, English, Spanish, French, and others. In 2023, the TooNFT team will launch P2P  trading and investment for its users to make the NFT market highly advanced. Besides trading webtoon NFTized content, users can also trade and conduct fundraising without the need of an intermediary as the platform is decentralized.

In the foreseeable future, TooNFT will have many webtoon platforms to accommodate content procedures.