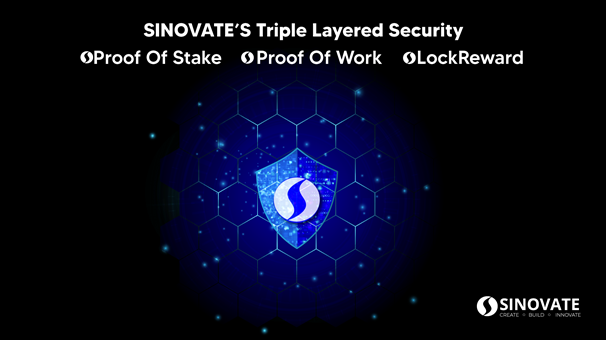 SINOVATE believes that numeric data becomes an inescapable concern for companies, governments, and individuals in a world of the Internet of Things, Big Data, and Artificial Intelligence. In 2019, Cloud services were valued at 264.7 billion USD and should reach more than 900 billion USD in 2027. The services provide a fast and comfortable experience, but the centralization of processes and difficulties adjusting the security levels leads to many data breaches. Therefore, decentralizing the operations with cryptocurrency becomes undoubtedly the next milestone for evolving Cloud ecosystems.

Cryptocurrency in the service of Data Storage

The emergence of cryptocurrencies and peer-to-peer networks opens novel possibilities to develop secure and decentralized end-to-end infrastructure. For example, a cryptocurrency relies on a blockchain infrastructure to secure data transfers and payments and certify authenticity. In addition, the blockchain supports a decentralized consensus system to guarantee that a block and associated data are valid or not.

More than 40 projects dedicate their blockchain infrastructure for this purpose. However, the Eldorado of decentralized Cloud (dCloud) known as Cloud 3.0 is challenging compared to centralized solutions. Some solutions propose to use blocks to transfer the data directly. Others decide to exploit the Proof-of-Services (PoSe) layer, an additional infrastructure, with masternodes technology. Finally, the latter chose to integrate novel consensus such as Proof-of-SpaceTime (PoST) with a network of external validators.

However, the low throughput offered by blocks themselves or algorithmic complexity solutions cannot guarantee the mass adoption of Cloud 3.0 because they do not provide scalable, fast, and user-friendly infrastructure. Furthermore, these technologies suffer from different aspects according to the blockchain trilemma: Decentralization, Security, and Scalability.

Over the years, the security aspect of decentralized blockchains and their consensus algorithm has been a highly heated debate. Bad actors have been wrecking small to medium Proof of Work projects such as Ethereum Classic or, more recently, Verge, which also used a mix of hybrid proofs with some security breaches.

As a reminder, Proof of Work (PoW) is a term used to describe the most primitive and academically proven way to authenticate the generated block of transactions. It is how Bitcoin secures itself as a decentralized ledger. However, smaller projects do not have the economic incentive or reach to compete in a fair mining environment. One could even argue that the process of Bitcoin mining itself is relatively unfair. For example, an issue can be different median electricity rates across the world or mining equipment availability. It was the thought behind Proof of Stake (PoS).

PoS is a term used to describe a broad set of consensus algorithms that use the stake of coins/tokens of raw economic and computational power. Unfortunately, highly speculative concern over the nature of the most promising PoS implementations has shown significant inefficiency and centralization. As a result, PoS usage on live networks as exposed to risks and carrying economic value is now mostly relegated to its smaller and more centralized sibling, delegated PoS (dPoS). The issue here is that while research and innovation for newer staking protocols are very much active, dPoS itself has proven to be highly centralized. As a result, most networks will rely on a small subset of validators and delegate their stake to them – essentially losing all their voting power in the protocol to an entity which they are forced to “trust.”

An introduction to the SINOVATE ecosystem

SINOVATE is a state-of-the-art blockchain open-source cryptocurrency with a fully custom and innovative platform toward a massive adoption of Cloud 3.0. Created in 2018 with the former name SUQA, the project decided to leverage the current technological drawbacks of Cloud 3.0 in June 2019 and rebranded to SINOVATE with ticker SIN. There is no hard cap of maximum supply, but they use the Proof-of-Burn (PoB) mechanism for a self-regulated circulating supply, providing an actual deflation. SINOVATE is currently utilizing a PoW algorithm for block validation. In addition, the project finalized in December 2020 a novel PoSe layer referred to as Infinity Nodes with an improved security protocol called LockReward. 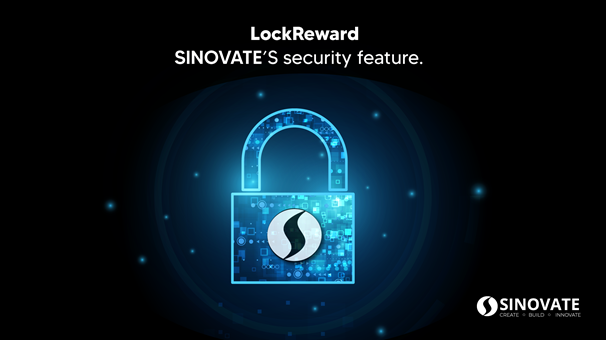 The Infinity Nodes is a multi-tier system that allows future network maintainers or data storage providers to play with the ecosystem.

Recently, SINOVATE communicated the following milestones to improve its blockchain technology and its ecosystem with BETELGEUSE, CONSTELLATION, and DOPPLER improvements. BETELGEUSE improvements have already passed the first testnet and will be fused with the CONSTELLATION release. Furthermore, in this last release, SINOVATE developed a new type of consensus involving mixed proofs and the Infinity Nodes, which drastically improves security by keeping a high degree of decentralization and scalability.

What is the Triple-layered Security Blockchain?

Cryptocurrency itself was meant to fix the trust issue, and SINOVATE firmly believes this. With BETELGEUSE upgrades, its blockchain technology now has three different first-layer consensus algorithms, PoW, PoS, and a novel security feature we call LockReward, which involves PoB enabled Infinity Nodes.

SINOVATE’s Proof of Work algorithm, X25X, is explicitly made to avoid creating specialized mining equipment favoring consumer-grade Graphical Processing Units (GPU) that, barring any silicon crisis like this one, are generally more available and distributed around the globe. In addition, SINOVATE recently added a PoS algorithm on top, which will help users more easily contribute to the blockchain’s security by simply putting up their funds as a stake in an effortless and trustless manner.

Considering this consensus-based on mixed proofs, an attack on our network, like a 51% attack (where the attacker uses mining power/stake to overturn the network and re-write the blockchain), would require 51% of our mining network hash rate and 51% of the staking coins. This already sums up a relatively high economic power/market cap ratio critical for maintaining a secure distributed ledger.

On top of this, SINOVATE developed the Infinity Node LockReward. Using novel cryptographic systems (such as MuSig, a Schnorr-based signature aggregation scheme), the blockchain infrastructure can effectively collect signatures from network participants and use them as novel proof for security purposes. The participants must be specially selected to meet this new security standard, and this is where SINOVATE Infinity Nodes come into play. Infinity Nodes are collateralized burn to run nodes (as in, nodes that require you to burn your funds to run them) which are rewarded over time based on their LockReward grants. Each node must be online and listening to contribute their own commitment. Each node validates the reward produced; LockReward essentially serves as a powerful security tool, benefiting both node owners and the ledger itself. 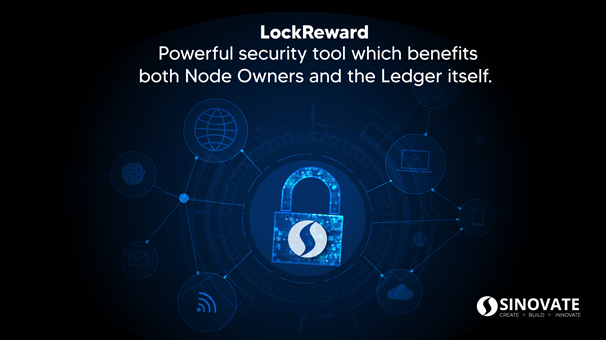 This chain of signatures is what makes the third and final consensus layer we have baked into our algorithm. The security which results from all of these implementations combined is quite impressive.

The Operation Cost for an Attack

As both PoS and Infinity Nodes use economic power to establish consensus, the cost of an attack scales a lot better with our market cap. Let consider the following example:

An attacker would require a few hundred GPUs, the electricity to run them for at best around 2 hours, at least 51% of the staking coins in the network, and at least 155 Infinity Nodes. Furthermore, SINOVATE selects Infinity Nodes in the BIG Tier, the most expensive one, to guarantee a stable and permanent Infinity Nodes selection in the LockReward protocol.

Barring the obvious logical implications of attacking a network that requires you to burn your funds (hence eliminating any sell-off opportunities and tying you to its fate), the cost for attacking SINOVATE for a 4 million USD market cap is an outstanding 1 million USD.

With such a steep curve, this ratio maintains itself and scales incredibly well. For example, with a 100 million USD market cap, an attacker would need a whopping 20 million USD to pull off a successful attack.

If Bitcoin blockchain implements the triple-layered security with a market cap of 700 billion USD, an attacker would need to spend approximately 150 billion USD, the GDP of Hungary, to perform a successful attack. Furthermore, this does not consider the exponential growth of Bitcoin Mining and the spread of Bitcoin circulating supply in the hands of many.

Next Steps of SINOVATE Cloud 3.0

SINOVATE aims to offer the most reliable, scalable, and user-friendly infrastructure to keep safe the data of people. The introduction of the triple-layered security blockchain shows the willingness to achieve such a purpose. Of course, this feature brings another advantage to blockchain technology with higher scalability (up to 2,000 transactions per second) despite a slight decrease in decentralization. However, the decentralization remains relatively high compared to dPoS solutions or Byzantine fault tolerance-based solutions.

In the following steps, SINOVATE will improve the scalability and create a multi-chain ecosystem with the introduction of InfiniteChain technology in the CONSTELLATION release. This will allow companies to develop their own blockchain attached to the SINOVATE chain and enjoy all the interconnected chains’ incoming data storage features. Finally, the DOPPLER upgrade will gather the first stones of Cloud 3.0 with the blockchain-based file transfer protocol (bFTP), ensuring fast, secure, and immutable data transfer.