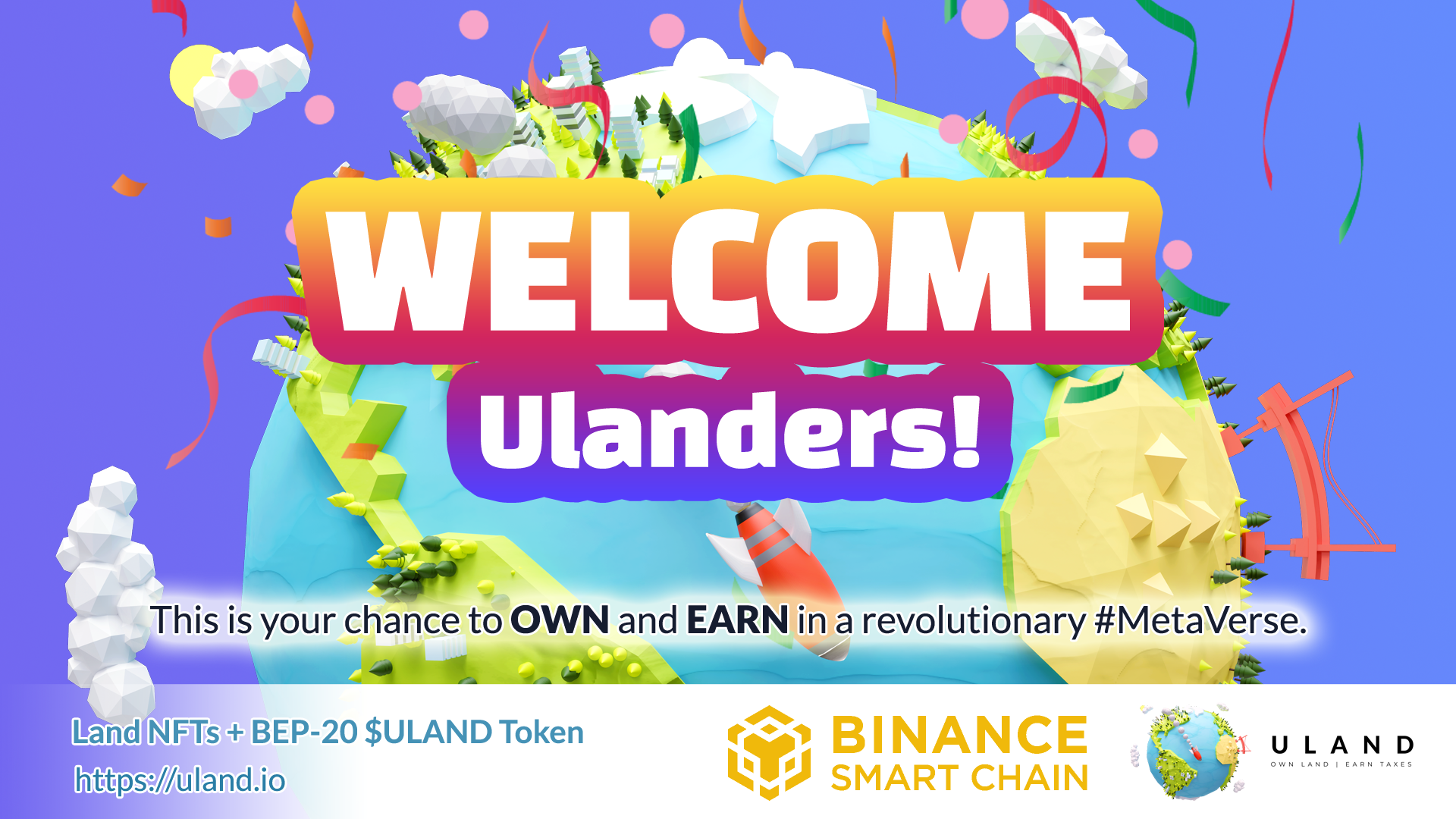 ULAND may be understood as a digital ‘Earth’ created on the Binance Smart Chain (BSC) through the innovative usage of blockchain technology. It is the inaugural land-based non-fungible token (NFT) platform of its kind, replicating all of Earth’s existing geographic locations, complete with its $ULAND token currency which helps support the ULAND economy.

One of the most intuitive aspects of this project is that users shall be able to access any destination. In ULAND, users can purchase digital areas that are exceedingly similar to that of the real thing, such as Australia, France, New York City and more. Furthermore, each location asset has been mapped to its real-world counterpart, which means that there shall only ever be one China or Australia ever minted.

Users are eligible to receive benefits via ULAND NFTs

ULAND is unique in the sense that all of the digital NFTs are in fact mapped to actual real-world areas, making them relatable on a personal level. People often experience an innate emotional attachment to the country, states, cities and different places from where they originate or would have visited in the past. With that being said, many people would hence love the opportunity to visit these places once more. There is also a minimal entrance barrier because users do not need to master intricate mechanics or live in a fake world with fictional history. Furthermore, users can also profit from ULAND NFTs by obtaining incentives from Token buy-ins, thereby providing even more reason to take part.

Additionally, the in-game meta currency of ULAND is $ULAND tokens, the value of which is determined by liquidity. To give users a secure, reliable and safe investment, a portion of each transaction in and out of ULAND shall be locked up as liquidity.

Simply put, the project’s goal is to thus develop an authentic virtual replica of Earth which effectively duplicates all geographical areas as well as landmarks. ULAND shall hence offer famous destinations such as the Empire State Building, the Eiffel Tower, the Grand Canyon, the Great Wall of China, Victoria Falls, the Northern Lights, and many more in the future.

Past accomplishments and link with the metaverse

ULAND aspires to build a metaverse that has something for everybody. Investors would be rewarded immediately and will experience a rapid return on their investment. Gamers will have a pleasant experience visiting the digital world and PTE. Moreover, people can benefit from a wide array of corporate services as well as utilities too.

The project has significant long term plans as well because ULAND isn’t about trying to change the world as it instead mainly desires to take the best of what this world offers and improve upon it. It is therefore working to provide its users with the ability to learn about other cultures, lifestyles, languages and customs while also having fun, making friends, and earning an income. This is the true purpose of ULAND.

In terms of previous accomplishments, the presale was incredibly successful, with 100% of Tier 1 Land Asset NFTs (Countries) sold out except Ethiopia. The initiative has also already handed out $280,000 USD in rewards to early adopters.

Russia had the greatest record resale, having been minted for 10 BNB and subsequently resold for 25 BNB. In addition, New Caledonia has the record for the largest percentage resale with 1,900%, increasing from 0.086 BNB to 3.61 BNB.

Whilst pre-sale has now concluded, ULAND will officially launch on December 15th at 06:00 UTC. Tier 2 Land Asset NFTs (States/Regions/Provinces) will be released as part of the launch, along with a new category of passive income: Distribution Rewards. Tier 1 Land owners will now have the ability to unlock Tier 2 Land Assets within their respective Countries and receive a percentage of the mints. This is the commencement of the DAO (Decentralised Autonomous Organisation) model with the introduction of governance features such as setting custom mint prices and taxes.

Furthermore, $ULAND Tokens shall be utilised for Tier 2 unlocking as well as minting, with BNB formerly being used for minting purposes. This will result in more people purchasing the token. Along with this version, the ‘World Marketplace’ shall also be improved with additional interactive elements and an enhanced UI experience as well as easier usage.

Metadata authority also allows users to rename their nation and give themselves fancy titles like King’, ‘Queen’, ‘Prince’, ‘Dictator’, and more. Finally, users’ asset portfolios shall be effectively managed as well. There is also an official launch giveaway happening right now.