Unichange Updates the Cryptocurrency Community with Its Annual Report for 2016

Unichange Updates the Cryptocurrency Community with Its Annual Report for 2016

Unichange, the cryptocurrency platform has released its Annual Report for 2016 to update its customers about the platform’s performance during the year. The report offers brief insights into various aspects of the business and growth in comparison to the previous year’s (2015) statistics.

Unichange, in the past one year has had its active user base multiply by over 5 times, which translates to a 4-fold increase in completed orders. The platform’s increasing user base is supported by its partner and affiliate network. The efficiency of such network is exhibited by a 5-time increase in bonus payouts compared to 2015. Unichange believes in maintaining constant contact with its users, leading to a threefold increase in its social media audience as well. 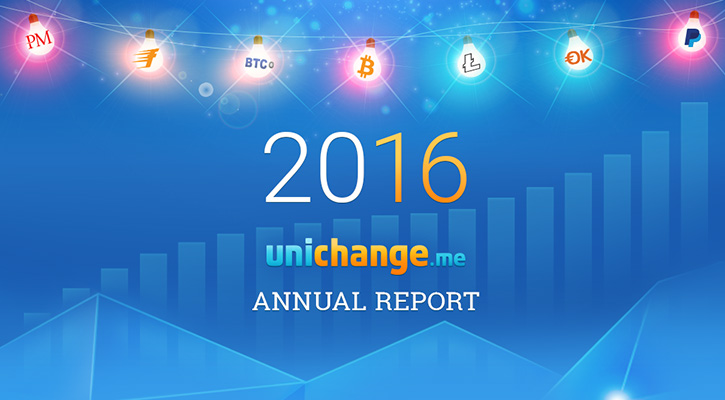 The platform, being very receptive to customer feedback has implemented various new features.  Some of the feature updates on Unichange includes the addition of 47 new automated exchange directions along with 4 new payment systems and an intuitive, user-friendly user interface.

Few notable updates from Unichange in its Annual Report include an updated ordering mechanism for Unichange Debit Cards and Unichange Virtual Cards. While users can order their Debit Cards by going through a two-step process, Virtual Card purchase can be executed in a single step. These cards can be bought by making payments through Bitcoin, Litecoin, BTC-e USD, OkPay USD, Perfect Money USD/EUR and FasaPay USD/IDR.

The increased automation of Unichange process is reflected by the inclusion of 47 new exchange directions, bring the total to 50 exchange directions. Unichange has understood the need for additional payment and withdrawal options like MoneyGram and Western Union Money Transfer for those without bank accounts. By reintroducing both options, the platform has addressed the requirements of such users.

FasaPay users now have the option to exchange between USD to IDR and vice versa whenever they wish in less than few minutes. In order to facilitate anytime exchange, Unichange ensures sufficient reserves at all times for both exchange directions. Users can also benefit from the new, all-inclusive fee structure on Unichange platform.

Along with the addition of new product features, Unichange has also expanded its customer support options. It includes new Chinese and Indonesian language support, a blog platform and a constantly updated YouTube channel. The platform is also active on Facebook. Throughout 2016, Unichange has been actively promoting its services and partners by implementing banners in different languages.

There are few added security features on Unichange. Along with SSL and passwords, a two-step account authentication system using a unique code now offers additional security to its customers.

Unichange is expected to introduce more features to make the platform much better in 2017.