The Necessity of Oversight in Decentralized Currencies

This comment arose from a statement in the article that read: “A decentralized digital currency requires regulation and oversight.”

His confusion — incredulity, even — is not uncommon; it’s something I’ve heard and read throughout digital currency circles for some time now.

So what better opportunity following R3CEV’s announcement of Corda last week to discuss the semantics and pragmatism of the very word that has sparked heated debate and discourse since peer-to-peer, trustless cryptocurrency began penetrating societies worldwide.

By definition, decentralization refers to the dispersion or distribution of functions and powers; specifically: the delegation of power from a central authority to regional and local authorities.

When it comes to the financial world, this realization of a decentralized system, one without a central clearing house or authority to act as the intermediary between transactions, is an ideal proposition for anonymity and personal privacy.

But as previously covered in past reports, including the report referenced above, this arrangement is not a practical approach to financial governance in the 21st century, not with data already present on money laundering and other illicit financial activity.

The Basel Institute used 14 different indicators that deal with Anti-Money Laundering/Combating the Financing of Terrorism (AML/CFT) regulations, corruption, financial standards, political disclosure and rule of law to aggregate an overall score, which is then used to compile an index rated from highest risk to the lowest.

In examination of the top 10 (see image on left) on their list, the Basel Institute concluded, “The majority of high-risk countries are characterized by intrinsic weaknesses in both preventing and enforcing multiple aspects of the AML/CFT framework.

Reasons raised referred to “structural and functional vulnerabilities” such as high rates of perceived corruption, lack of judicial strength, but also, and most relevant to the subject here, a “lack of resources to control the financial system, and lack of public and financial transparency.”

A decentralized currency can exist with regulation and oversight; it must.

Wholly private blockchains aside, to enable the kind of security, trust and level playing field a public-use financial system requires, it must be accessible to overseers. Further, that process, along with the system itself, must be as open and transparent as necessary to regulate and enforce against illicit activity.

R3CEV’s announcement of Corda last week was an announcement in the waiting, the logical progression for the financial sector.

To make the step toward adopting next generation technology, that technology can’t mean a fatal disruption of such a prominent pillar within the global system. Further, it’s the technology, not the semantics attached and associated, that is most important.

“We are not building a blockchain. Unlike other designs in this space, our starting point is

individual agreements between firms…  We reject the notion that all data should be copied to all participants, even if it is encrypted.”

R3 is reverse-engineering, tackling the problem of adapting blockchain technology to fit to current constraints and frameworks.

As such, Corda consists of key focuses, among others, that help build trust and mainstream viability, elements such as:

So while also “allowing choreograph[ed] workflow between firms without a central controller”, in other words, maintaining a decentralized structure, R3’s latest technology also helps adapt blockchain technology to long-established regulatory and supervisory frameworks. 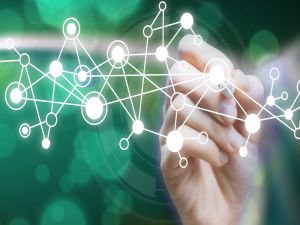 These are frameworks, as the Basel Institute attests to, that are necessary to combat illegal activity like money laundering and terrorist financing, among other elements and actions of malefactors.

Corda’s blockchain architecture also allows for interoperability and flexibility so as not to restrict and constrict inclusion. Agnostic is the best avenue in the digital space.

Further, R3 reported that the technology will include agreement at the “local” or individual level as well as offer validation between just parties involved in a transaction in contrast to a “broader pool of unregulated validators.”

These are important attributes and establishes Corda as the vision of a mainstream, decentralized infrastructure, if there ever could be.

The fact financial institutions are at the core of this development also stands to reason individuals could then exist and operate on a layer above, supported by the same fiscal framework the global economy currently beats to, just one more efficient and cost-effective.

And to anyone that believes a decentralized, peer-to-peer system could operate without regulation and oversight, consider the Panama Papers scandal.

Even with rules and regulations, citizens — some of the wealthiest and supposedly legitimate businesspeople — circumvented the system for their personal gain. You can point to that and say the system as it is is not working, but one devoid of any ability to regulate and oversee sounds all the more alarming.

Decentralization doesn’t have to mean precisely what Satoshi Nakamoto’s invention laid out, the same as a blockchain does not have to exist in the same form as the Bitcoin iteration.

As Corda is demonstrative of, the semantics of a word, the definitions and structures that exist behind it, they are meaningless. Technology is adaptable and the people who are the creators, are adaptive.

Corda will be open sourced when the code has matured further, according to Brown. It will be an anxious wait at Vanbex Group to see the market-ready product. We’re also sure Corda’s example will not be the last to surface as a solution to automating and decentralizing the financial world.

Kevin Hobbs, director at Vanbex added, “If history has shown us anything it’s that full decentralization works for just a short period before failing. With no true form of traceability and a lack of transparency, people can take advantage for personal gain.

“Financial systems need some form of control, regulation and oversight and blockchain technology allows us to do just that. It’s just a matter of whether that’s the kind of blockchain we want.”

What do you think about regulating decentralized currency? Let us know in the comments below!