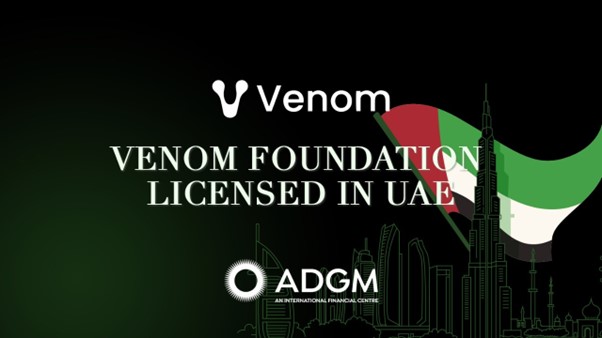 The Venom Foundation has become the first cryptocurrency foundation to be registered in the ADGM. The foundation now has a license that allows it to run a blockchain and issue utility tokens. Investors and companies providing financial services in the area and from across the world are drawn to ADGM because of its well-deserved reputation as a fintech paradise.

The sharding protocol that the Venom blockchain employs is the best method for achieving transactional scalability, and it also enables economic scalability by making it possible to host community-built sub chains in the future. These two benefits combine to make the sharding protocol one of the most important aspects of the Venom blockchain. Additionally, everyone has the ability to take part in the open and honest ecosystem that is provided by Venom.

“One of the main things that drive us in our quest for development of an ultra-fast scalable blockchain is the growing Venom community that utilizes our technology to create a constantly expanding ecosystem of products.”

TVM, or the Venom Virtual Machine, is the virtual machine that allows smart contract code to be executed on the Venom blockchain. Venom offers TVM. It is the Turing complete virtual machine, which operates similarly to an EVM but is significantly distinct from one.

The execution of application logic may be redirected in new, more flexible, and more precisely regulated ways thanks to smart contracts in Venom. Using their toolchain and development instructions, users may get started on the process of constructing smart contracts using Solidity.

Users may begin using Venom right now by receiving and transmitting assets across the network if they have a Venom Wallet, which is an access point onto the blockchain that enables them to use Venom.

The Abu Dhabi Global Market (ADGM) has granted the cryptocurrency network Venom Foundation the right to operate a blockchain and issue utility tokens. Venom Foundation is situated in Mena. According to Venom, as a result of this step, the crypto foundation becomes the first organization of its kind to be granted such a license.

When combined with Abu Dhabi’s efforts to promote itself as a main centre for digital assets, such as the establishment of the Abu Dhabi Blockchain and Virtual Assets Committee in August, with the aim of bolstering its strategy for developing and governing digital assets, the Foundation is poised to build a leading position in the MENA region.

According to Venom, “nowadays, Mena region entrepreneurs are considered the pioneers of the global crypto trends adoption, thus there is a vital need for companies to think of decentralized globalization of the data flows for businesses as well as governmental and social projects.”

The Foundation is supported by top executives, such as: Peter Knez, Ph.D., former global chief investment officer at BlackRock is in the mix, a well-known, seasoned business leader and investor in the expertise of fintech with a primary emphasis on data-driven decision-making.  Also the founder of Knex Ventures, a force to be reckoned with, we expect big things from Venom.

Entrepreneurs, thought leaders, and other notable figures that have been involved in the development of the Venom Foundation. Mustafa Kheriba, Dr. Steck, and Osman Sultan are a few examples of those key individuals who are members of the Foundation and who provide the project team with complete support and great guidance.