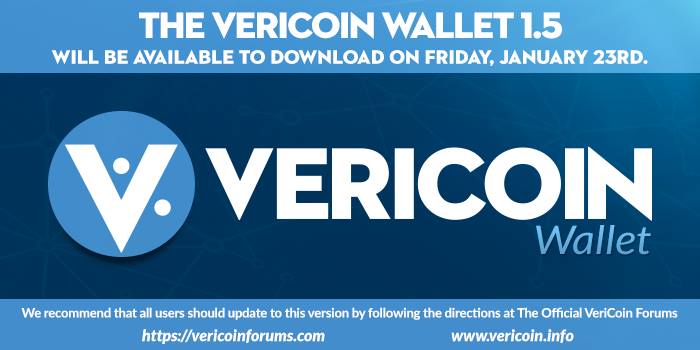 VeriCoin will be bringing a new wallet to their users on January 23, aptly named VeriCoin Wallet 1.5. In the upgraded wallet, users will find a plethora of new features that aim to take the wallet to the next level.

The first thing people may notice is an upgraded graphical user interface (GUI) to make things simpler for the end user.

The VeriCoin team said the following regarding the new GUI:

“We have overhauled the GUI to help the average ‘every day’ end user navigate the wallet more efficiently. By using simple, graphical headers the user knows where they are at all times.”

VeriCoin Listening to the Community 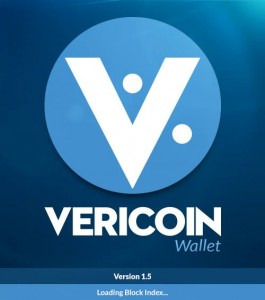 After this wallet is released, users won’t ever have to manually update their wallets again. The VeriCoin development team is adding an Auto-Update feature that checks periodically for new versions, leaving the end user to put it out of their mind if they prefer. Combined with their Turbo Bootstrap feature, downloading and syncing the entire blockchain is supposed to only take a few minutes, depending on the internet speed and general network congestion.

Users will also have access to a “News Ticker” on their overview tab that brings the most recent VeriCoin news posts to them and displays a link to the articles.

As an added bonus to the wallet upgrade, users can now set the number of decimal places used to show VeriCoin amounts. It may not seem like much, but as the recent “bits vs. Satoshi” debate within the bitcoin community fairs, cryptocurrency users can be quite preferential and want that freedom within their wallet and services.

The decimal place option, News Ticker, and Auto-Update are all features requested by the community, and it looks like the development team was listening. Coincidentally, members of the community will also be able to request new features and connect with others in the new chat tab, utilizing an integrated IRC chat channel.

Furthermore, users will be able to check out the official forums and navigate the blockchain all from their wallet, sort of like a built-in browser. Users can check out and explore the blockchain, viewing all detailed and pertinent information including an address search, list of the richest addresses, largest wallets and even more to be unveiled upon release.

After they’re done there, users can scurry over to the newly designed “Get VeriCoin” tab that’s replacing the old “Buy VRC” one. With an extended list full of updated exchanges, anyone can buy the cryptocurrency with either traditional currency or bitcoin directly from the wallet.

Finally, minor adjustments to the platform will roll out upon release, including user-friendly options to backup the wallet.dat file or initiate a Rescan of the blockchain for wallet transactions.

“We continue to add functionality, utility and innovation,” the VeriCoin team said. “This is just the beginning of what, we believe, will be an amazing year for VeriCoin, our community and the financial technology sector in general.”

What do you think of the new VeriCoin wallet features? Anything you want to see in the future? Let us know in the comments!

Images courtesy of the VeriCoin team