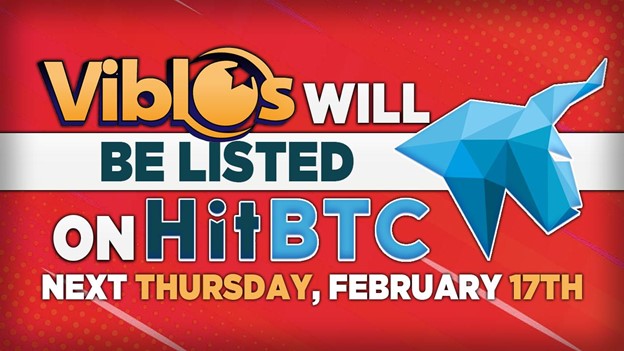 Viblos announced the listing on HitBTC next Thursday, February 17th

Viblos, the world’s first decentralized social network based on swiss democratic principles will be listed on HitBTC next Thursday, February 17th, 2022.

Over the past decade, prominent social media platforms such as Facebook, Instagram, and Twitter have progressed from being basic entertainment venues to becoming a cornerstone in communities’ way of life. These websites are currently owned by a small number of huge platforms that absolutely dominate the online world. While there is no doubt that these platforms provide respectable services to consumers, these advantages come at exorbitant fees that the majority of users are unaware of. And this is due to the fact that the vast majority of users do not read all of the terms and conditions that they automatically accept when joining a social networking site.

In addition to disrespecting consumers’ privacy, their algorithms and political orientation affect content ratings. Viblos, a coming of age Web 3.0 social network platform is aiming to change that. Viblos is a tokenized mixed social network that promotes democratic and free-expression-based social interactions and community building. Of course, there are boundaries that should not be crossed, but Viblos would never demonetize or censor someone simply because they hold a different viewpoint. Unfortunately, that is the road that most of the major platforms have chosen.

Viblos will contribute to the creation of a new internet synergy. This new paradigm brings together blockchain technology and social media. Viblos will make the impossible achievable by allowing you to earn money as a passive user without having to create anything. Users will be able to earn money in a variety of ways while also sharing and monetizing their contributions in a secure, transparent, and verifiable manner. In addition, users will have the option to choose whether they want to be paid in native tokens, fiat money or other cryptocurrencies.

What makes Vilblos a social network of the future?

Viblos is a decentralized autonomous organization that was formed to provide users of the platform with more autonomy. Viblos DAO is a digital version of direct democracy in Switzerland. All of its users have control over their data and have the option to protect their privacy, thus the governance is in their hands.

Blockchain has the potential to establish an environment that monetizes content creation and use while also protecting users from government control. Users’ data would be secure and confidential, and content shared would be genuine in such an environment. Viblos’ objective is to use an open and decentralized social network to bring people’s interests together and allow them to do business. Furthermore, the project aims to give value to any creative output, allowing users to develop their skills while also establishing a direct, decentralized relationship between the public and content producers. In order to empower and build their enterprises, Viblos also plans to create a common thread and communication route between celebrities and influencers and their networks.

Viblos is a composite of both the Internet of Things (IoT) and the Internet of People (IoP). This platform is being implemented by the company to allow content creators to earn a decent livelihood by valuing their skills and various social connections. Viblos represents a paradigm shift in the way humans and their devices interact in order to extract value from their data. It is proposing a new concept dubbed “value of people,” or simply VoP, through Viblos, by promoting artistic and entrepreneurial talents. The platform would measure and rank users’ reputations using decentralized entities and a tokenization method. We believe that a decentralized reputational mechanism, rather than the current monolithic and opaque centralized social networks, can stimulate the expansion of the social network.

Users of mainstream social networking sites are bombarded with a plethora of advertising services that have an impact on their personal lives. Without their knowledge, their navigation behaviors are methodically documented and monetized. Viblos will provide value to its members by building a tokenized social media network that rewards them for their participation. Viblos will also foster creative expression and censorship-resistant freedom of speech, thanks to Blockchain’s openness and immutability.

Viblos is launching a decentralized and disintermediated platform that pays its content creators directly. The platform will also use a tokenization mechanism to allow content creators to validate their works before placing them on the market. Furthermore, allowing content creators to test-drive their efforts will give them the opportunity to evaluate whether their work is monetizable or not. According to MarketingDive, 40% of users are skeptical of traditional social network advertising. A decentralized and disintermediated social network can address these issues and help marketers benefit from social media marketing. Viblos is one such platform that, thanks to its algorithmic transparency and tokenization mode, will allow marketers and entrepreneurs to engage with organic communities.

Viblos is building a transparent platform that allows users to create and sell their content using concepts gained from traditional social media platforms and decentralized platforms.